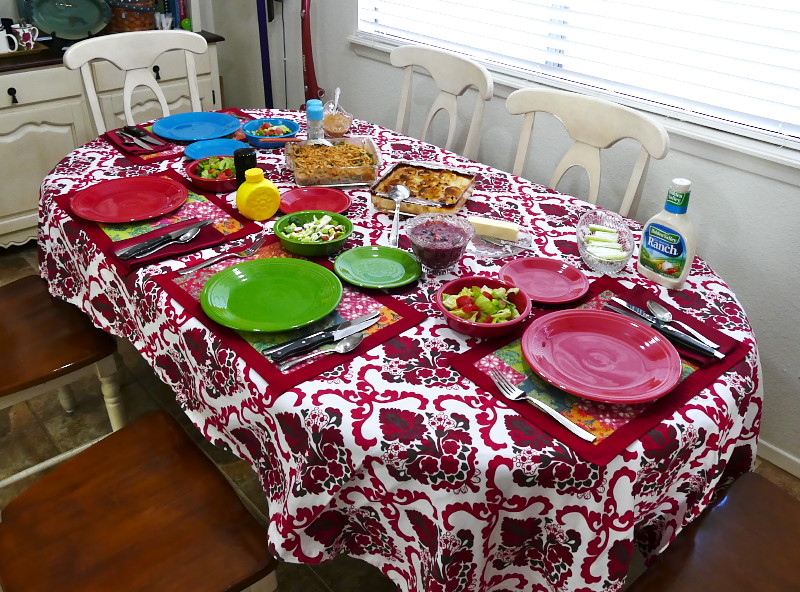 Lunch for 4? Or brunch? Or a late breakfast?


Cem_Usakligil said:
Lunch for 4? Or brunch? Or a late breakfast?
Click to expand...

Well, we hear that a really good picture requires not much explanation. I thought I would give it a try.

So I guess this pic doesn't qualify!

But in fact this was the table set for a Christmas Day dinner (early afternoon) for Carla and myself and our two friends who live across the street. The main course, a pre-cooked spiral-sliced ham (a gift in fact from Carla's son in Texas, shipped from the provider in an ice-packed container) was still in the oven at the time.

The leftmost of the two square glass dishes holds an infamous green bean casserole, a dish of which much fun is made (much as fun is made of Christmas fruitcakes). Topping it is said to be the only known use for the quite tasty "crispy fried onions" made by The French's Food Company, a well-known maker of spices, condiments, and such. (They are actually quite good on hamburgers, salads, and the like, but people hardly ever do that.)

Curiously, over her years of cooking, Carla had never before made the infamous dish (at some family gatherings in the past, when we lived in Texas, her daughter-in-law had made it), and of course we had regularly encountered it in the past at Christmas parties and the like.

But this year she decided to make it. Of course this was superior to any I had ever previously had. She bought the very best green beans available out here in the desert, and then pre-cooked them just to the ideal tenderness (al dente, as it were). (Typically the green beans are seriously overcooked.)

The rightmost square glass dish contains scalloped potatoes (escalope, non?) which, curiously, she also had never cooked before. Not even realizing that, I had just mentioned as she discussed the menu for Christmas dinner that that dish might be nice. So she made it. And it was just delicious.

The round dish contains a delicious cranberry relish that is made every year in large quantities by a family connected with our town's Senior Center and sold by the center.

I was a lovely occasion, foodwise and otherwise.

Well, despite my initial attempt, again I seem to have again despoiled this venue, properly devoted to self-sufficient images, with an illustrated story of life here in the desert!

Now, off to lunch/ Leftovers! Yum!

In any case, here is the cook: 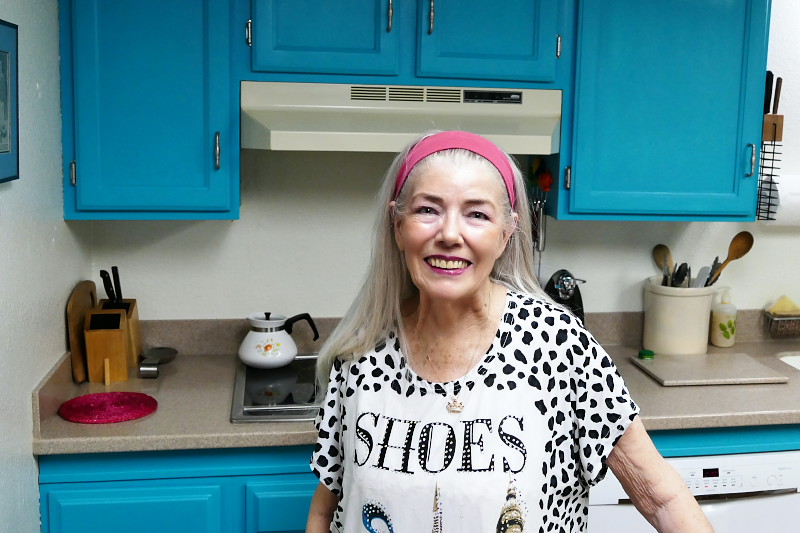 Douglas A. Kerr: Carla in the kitchen​
Best regards,

Just by the evidence, we can see a table set for 4 but no food in the plates. Still, salad has been apportioned and there are plates of perhaps some pasta dishes or the like. It could be that the latter are not real and just stage props. But then, we would expect that the plate colors would be far better coordinated with the table cloth, so likely as not, it's real.

That means food is about to be served or one wouldn't leave, apparently edible salad and cranberry preserves open to the air for more than a short while.

So now we know it is going to be probably Turkey based, as that goes well with cranberry jams and the like!

I trust you all enjoyed Carla's meal!

Doug Kerr said:
In any case, here is the cook:

Douglas A. Kerr: Carla in the kitchen​
Best regards,
Click to expand...


Even the pink band qualifies her as a "Red Hat Society" member in good standing!


Asher Kelman said:
So now we know it is going to be probably Turkey based, as that goes well with cranberry jams and the like!
Click to expand...

Well, as you know by now, the main course was ham (oy vey!).

I trust you all enjoyed Carla's meal!
Click to expand...

And there were plenty of leftovers, some of which we enjoyed for lunch today!

It's all enough to make the stock of major insulin manufacturers rise!


Asher Kelman said:
Even the pink band qualifies her as a "Red Hat Society" member in good standing!
Click to expand...

Indeed! It's the "battle dress", I guess.

Carla is so beautiful. You are indeed a lucky man.. and apparently, she cooks too! :-D


Maggie Terlecki said:
Carla is so beautiful.
Click to expand...

I think so too.

Yes, she is an excellent cook.

A very happy looking cook there. I hope she to sit down and enjoy her hard work.

Douglas A. Kerr: Wholly self-explanatory no. 1​
Click to expand...

Doug, Of course its self explanatory now that I understand about the special China. I am ignorant about such a lot of matters still!

I am sure that all the women in my family would identify the table setting immediately.


Asher Kelman said:
Doug, Of course its self explanatory now that I understand about the special China. I am ignorant about such a lot of matters still!

I am sure that all the women in my family would identify the table setting immediately.
Click to expand...

But that wasn't the point of the caption at all.

I was making fun of the assertion that a really good photo does not need any (many) words to explain it.