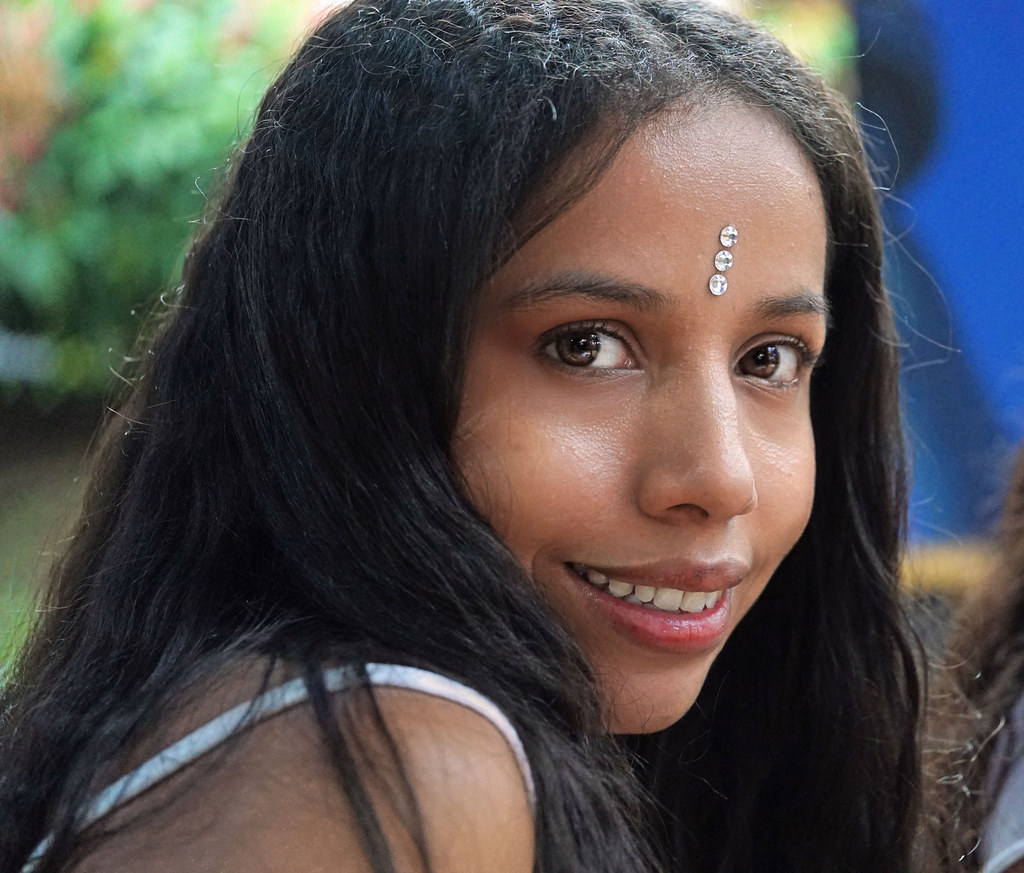 What a fresh engaging face!

Was she at the same location as Gisell?

That face structure is new to me. Wonderful long nose and wide smile. Is she from a particular recognizable ethnicity or it’s just chance she has that amazing look of a great people!

I wonder about the signification of the stones on her forehead. Or is that simply the current local fashion?
P

Ethnicity, you raise an interesting subject. Aleja is a long time friend and I took her, her daughter and her niece to a Delirio performance (salsa dance presentaion and a bit of circus). A sad aside about the niece, her mother who I also knew was shot when she was about twenty. One story has it that it was a stray bullet. They all come from a poor and dangerous barrio in the southeast of Cali. Anyway regarding Aleja's ethnicity it is Heinz 57 varieties as is the great majority of the population. If you ran a 23 & Me test on her there would be Amerindian and Black African as well as likely Spanish but who knows what else. Historically there have been a plethora of migrations to Colombia including around 1880 from Lebanon, Syria, Jordan and other Arab countries as well as from most of the European countries. According to British author Tom Feiling more English mercenary soldiers died in Simon Bolivar's war of independence than Colombians. He was so grateful he nearly made the national language English but was talked out of it by his second in command. Free land grants were given to those soldiers if they stayed in Colonbia for more than five years so plenty of Brits settled here. The Africans came as slaves to the Pacific coast and the populations of Buenaventura, Tumaco and Quibdó are largely Black. The town of San Basilio de Palenque was the first "free" village and was founded sometime in the 16th century Benkos Biohó, a former African king from either the Democratic Republic of Congo or Angola. He was an escaped slave. To this day the older residents still speak palenquero a creol language heavily influenced bt Kikongo from the Congo.

When I came to Colombia I was fascinated by the fact that if you go to a large chain grocery store in Cali more than half of the cashiers will have straight black hair, black eyes and brown skin. The Indian origins of the Colombian population are plainly evident everywhere you go. Currently more than forty different tribes exist and there were many more when the Spanish arrived. An interesting comparison between the history of North America and that of Colombia is that the early colonists of Noth America were religeous refugees from Europe who arrived with their families so there was relatively little mixing with the native population. In the case of Colombia the early arrivals were Spanish soldiers who immediately mixed with the native population. I had a girlfriend who clearly fit the India profile and though it would be fun to test her with 23 &Me but when I contacted that company out of curiosity they admitted they had almost no Amerindian data from South America.

To Jerome, no nothing special, just decoration. They handed those out to all the girls who came to the presentaion.

“Ethnicity, you raise an interesting subject. Aleja is a long time friend and I took her, her daughter and her niece to a Delirio performance (salsa dance presentaion and a bit of circus).”

Yes, this woman radiates ethnic beauty! Whatever the mix is, it’s marvelous. I am fascinated by various physiognomy traits. Here a appearance is sheer beauty and to be treasured. Tell her she has another admirer!