I believe the US state of New Mexico has the greatest number of physicists per capita of any of the US states. That would not be surprising, given that we have two major nuclear research and development laboratories, a major missile test range, and numerous other such facilities, with a total population of only about 2 million.

There is no doubt that it influences even such things as highway designations and marking. Not too far from us, the state highway that leads to the National Solar Observatory at Sacramento Peak (sadly soon to be decommissioned, or at best "repurposed") is State Route 6563, chosen after the wavelength (in ångströms, not now the preferred unit but widely used over the years) of the alpha line of hydrogen radiation (H-alpha), an important component of the sun's radiation.

And these are two of my favorite road signs, both on I-25 northbound not too far south of Albuquerque: 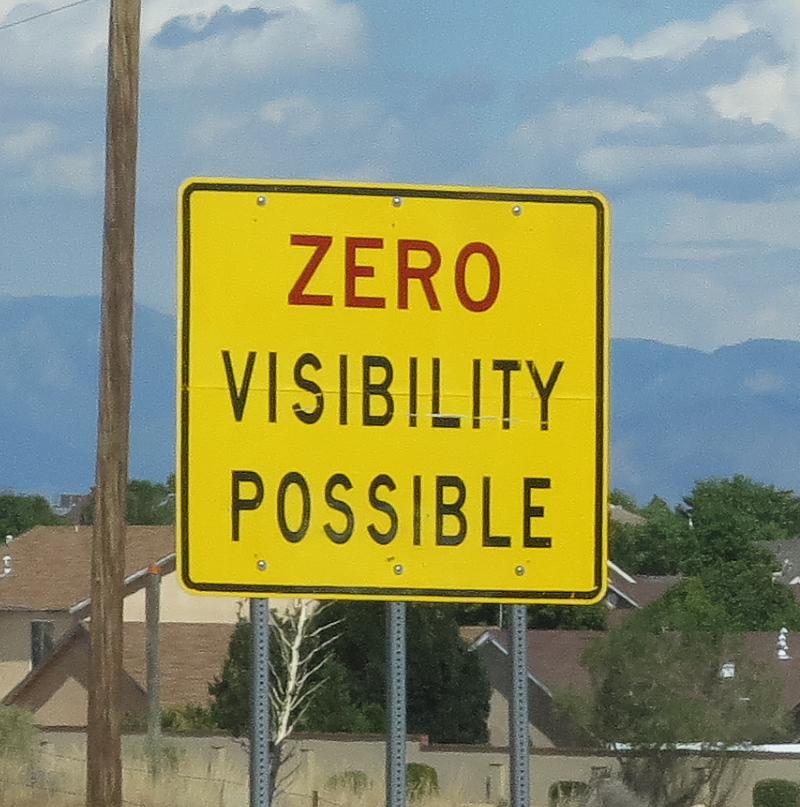 Douglas A. Kerr: And the physicist warneth 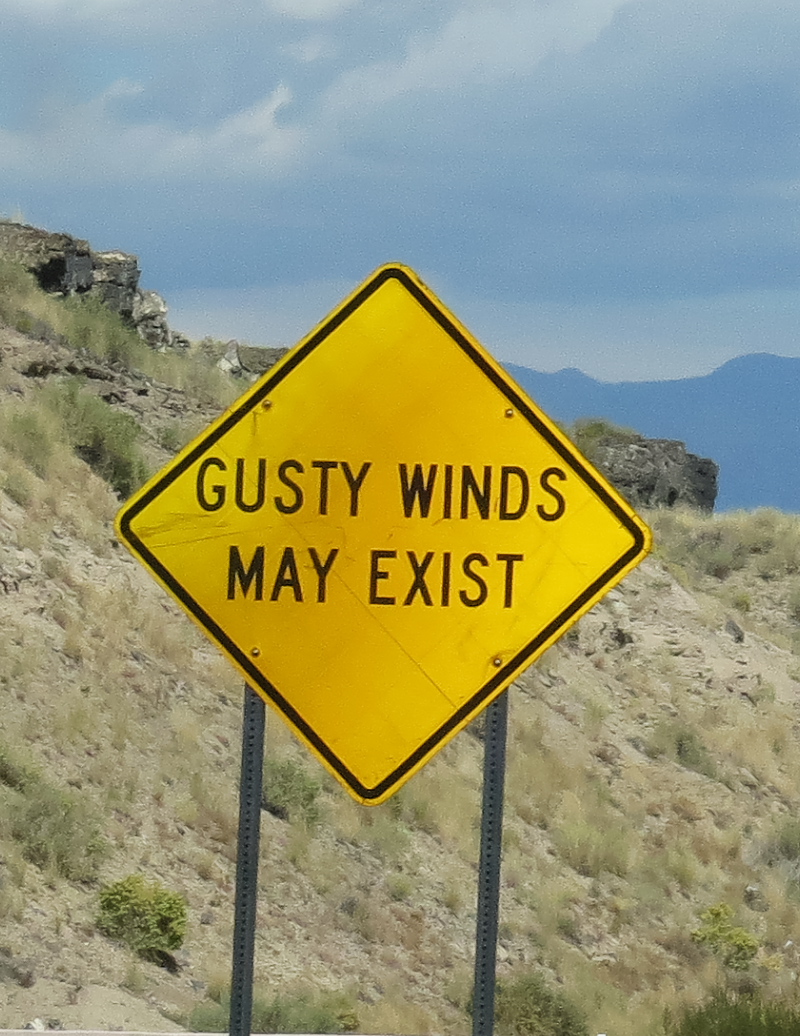 I don't know, I thought physicist was a soda bulb.

"Gusts of Wind May Exist!"

I just will respond as if I was standing in your place!

"Gusty Winds" may exist sounds like an edict from the creator as in instructions to start the separation of different masses to create heaven and earth. Then it's the divine giving license for such winds to occur!

It also could mean that we are not sure, but considering the likely possibilities the existence of gusty winds cannot be altogether be ruled out!

It could, of course be a simple reminder to residents and a warning to strangers that, on this road, you had better not speed or else in unexpected Gust of Wind might blow you off a cliff!

But more interestingly, it would make a great final exam essay challenge for Philosophy students!

This may be fine for English speaking folk but how do they intend on getting the message across to foreign travellers? Zero visibility possible would be difficult to depict.

Once one has Visibility, "Zero" visibility is no longer visibility, so it's not possible.

So we must consider that this means,

and then, if you do so, then it might be possible for you to have some visibilty!

James Lemon said:
This may be fine for English speaking folk but how do they intend on getting the message across to foreign travellers? Zero visibility possible would be difficult to depict.
Click to expand...

As you well know, we are very "behind" in this country on the use of graphic symbols on roads, public bathrooms, and all that. In most parts of the county we still give distances on road signs in common fractions of a mile ("Exit 266 1-3/4 miles ahead"), even though of course most people use those in connection with their odometers, which of course read in decimal fractions. The explanation as to why these distances are not given in decimal miles is "most people don't understand decimal notation".

Bu then you are right as to the difficulty of devising a graphic warning for this condition.

Still, once as a joke on one of the executives of the company I was with (a famed combat flyer from World War II), at a test site for a certain type of traffic signal we were working on, I had one of my technicians make made a sign I had devised that said, graphically, "No chandelles" (a specialized aircraft turn, often used in air combat). It was erected on a post at the entry end of the test site.

When he came to the site for a big presentation and saw the sign, he "got it" right away and just laughed fantastically.


Visibility Possible!​
Once one has Visibility, "Zero" visibility is no longer visibility, so it's not possible.
Click to expand...

Not so. Zero visibility" is as valid a notion as "zero velocity" (only incorrectly thought of as "no velocity") or a zero balance in an account (which does not mean that there is "no balance").

So we must consider that this means,


STOP!​
and then, if you do so, then it might be possible for you to have some visibilty!
Click to expand...

But of course that sign does not advise the motorist to stop!

But of course it certainly suggests that the motorist might have to stop when the condition of "zero visibility" occurs (or is even approached). In the strict sense, when zero visibility occurs, one could not even see the tip of one's hood.

Actually, almost never does "zero visibility" (in the formal sense) occur in the atmosphere, so in the strict sense the sign is inaccurate.

Fun to play with these things, isn't it.

"Zero Visibility Possible" and "Gusty Winds May Exist" are reminiscent of concepts I'd hear in the University Department of Philosophy. Down in the Physics Department, where technical rectitude always ruled, there'd be an imperative that both conjectures be given numerical probabilities; maybe even with error bars.


Maris Rusis said:
"Zero Visibility Possible" and "Gusty Winds May Exist" are reminiscent of concepts I'd hear in the University Department of Philosophy. Down in the Physics Department, where technical rectitude always ruled, there'd be an imperative that both conjectures be given numerical probabilities; maybe even with error bars.
Click to expand...

Yes, that was what struck me about the wording of those signs!

If visibility were to be zero, nobody would be able to see the sign.

Here is a fake sign I made some years ago: 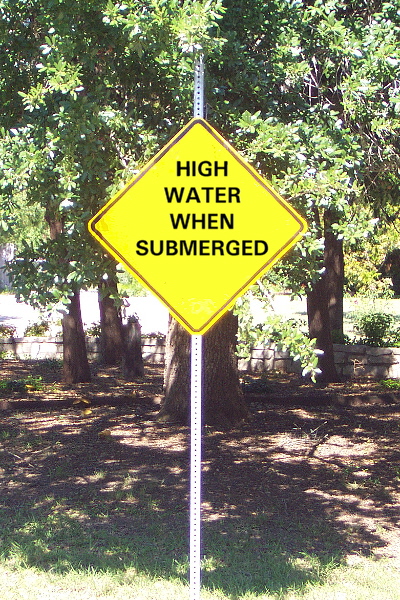 It was a take-off on this, found on a major highway in East Dallas, occasionally seriously impacted by high water: 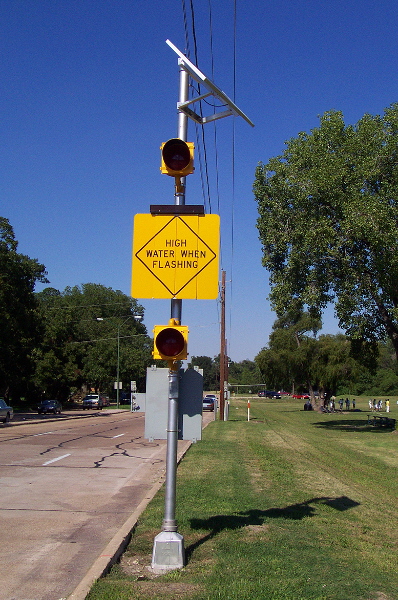 The fake sign (in comparison to the real one) was originally meant to be used in a joke at the expense of another state, sometimes ridiculed as being more primitive than Texas!