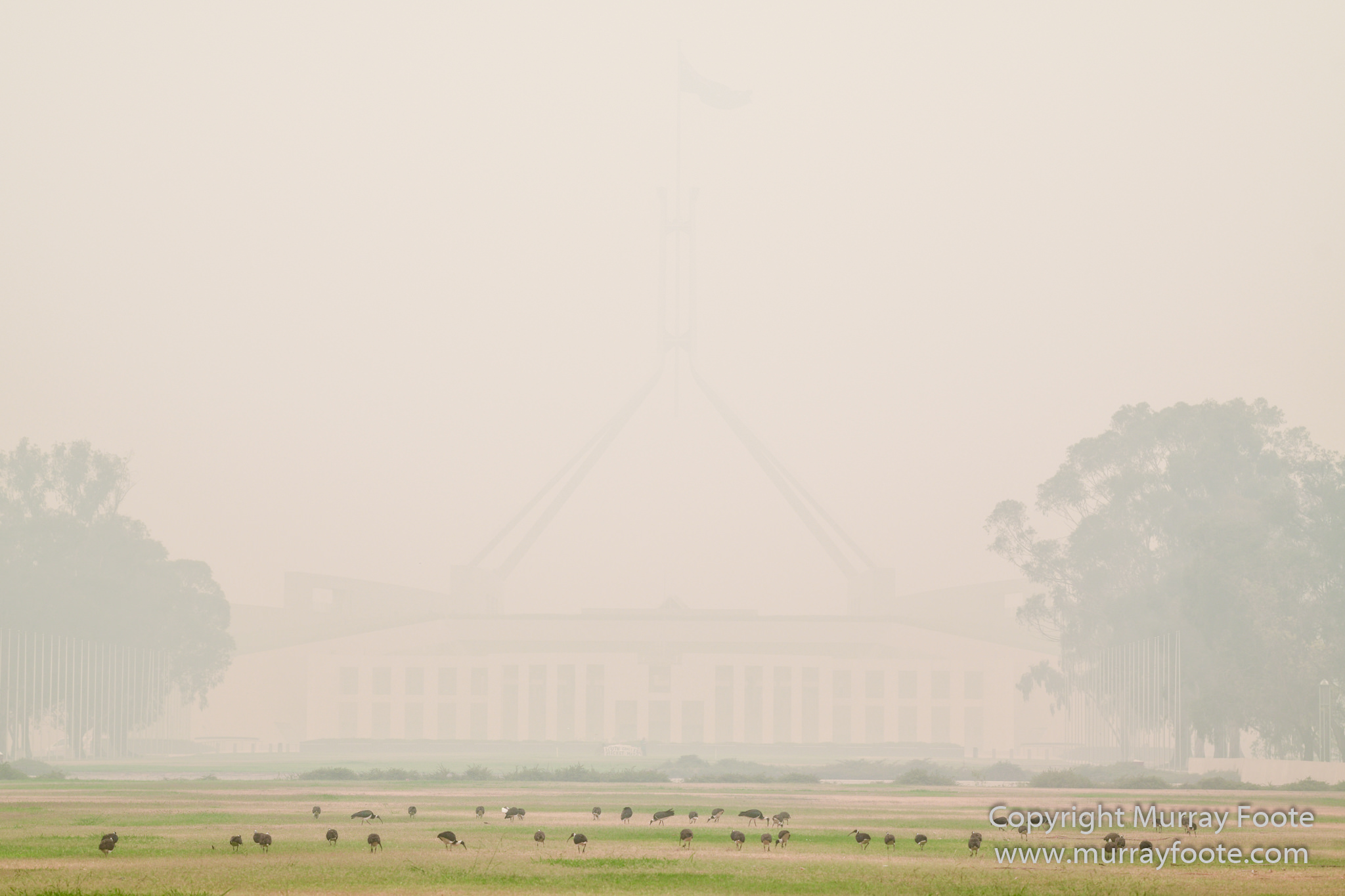 This is the new Parliament House in Canberra last Sunday morning, on a day when Canberra was measured to have the worst air quality of any city in the world due to smoke from the massive fires to our east on the south coast of New South Wales and also fires about fifty kilometres to our west that may be slowly advancing towards us. In the front is a flock of nearly fifty straw-necked ibis.

Here is a link to a Blog post that includes this image and fifteen others. It starts with images of wildlife out the back from where I live and then a series of images from that morning with the heavy smoke. There is also an explanation of the context.

12 September 2019 to 5 January 2020, Canberra, ACT . The first part of this post is images taken out the back of where I live in Canberra. The second part is images taken this morning in a very smo…

First, welcome back. We’ve missed you!

Next the Australian Bush Fires.

We need to know how to mitigate and modulate where possible.

Australia becomes a massive continental laboratory to test how to develop sustainable response to both climate and man made disaster.

If Australians can be persuaded then the rest of us will learn how they faced their issue head on.

Is Australia primed now for facing this debate and finding out what they must do?

The short answer is perhaps, but probably not sufficiently.

But first, a bit more context. We’re in for a cool week now in this region, with some rain. I’m heading down to the Thredbo Blues Festival in the weekend because the road into there was opened again yesterday, for a while at least. However, there are many fires burning out of control and it will require heavy rain to put them out, and this rain will not be enough. The Bureau of Meteorology announced today that the hot dry conditions will continue until the end of April. So the fires could continue until then. We could have further days of extreme fire danger and it’s by no means over yet although the current area burned is equivalent to Syria or a bit more than Washington State.

There are other global warming issues as well. Some of Australia’s major rivers ran dry a few months ago, stranding hundreds of thousands of fish and this is likely to happen again this summer. Corruption and water theft are factors here too. Water shortages generally and in country towns are going to increasingly be an issue. A large proportion of the Great Barrier Reef has died (“coral bleaching”) due mainly to rapidly warming waters and this is expected to continue. Australia’s agricultural productivity is also vulnerable to continued rises in temperature though most people are probably not yet aware of this.

An increasing majority of the population is concerned about the Climate Crisis, though probably most do not understand it well and there is also an intransigent minority of climate denialists. There have been two factors to this. One is the Murdoch Press and the other is an influential minority in the Liberal and National parties. The Coalition actually won the last election without an energy policy and only has a majority of one.

Morrison has taken note of the shift in popular opinion and announced a Royal Commission into the bushfires. So Climate Change will be discussed and there will be improvements. We don’t really need a Royal Commission though, which will take a year or so to produce results. We need urgent action now. We can see what is likely to happen here from last year’s Royal Commission into Banking. The Morrison Government denied there was any need for this as long as they could, then when the Senate forced their hand, they established a Commission with a reduced scope and a short timeframe. The Royal Commission still uncovered many damning practices and the Government then tried to take credit for establishing it.

Last December, the Morrison Government undermined the UN Climate Conference in Spain and used accounting trickery to falsely claim they were reducing emissions. They were acting thereby as representatives of the Coal and Petrochemical industries. One of the main things Australia needs to do is to withdraw from coal generation of electricity as quickly as feasible (renewable is already more economic), withdraw approval for the proposed giant Adani coal mining project and stop exporting coal. Sadly, this is not likely to happen even under a future Labor Government and certainly not under the current one.

However, there will be a continued increase in awareness of the Climate Crisis and at least improvements in approach as compared to the recent past.

But no, I hope I am wrong, but I don’t expect Australia to emerge any time soon as a world leader on Climate Change.

(p.s. I have prints to make and a festival to cover. I may not be able to respond to comments for some days). 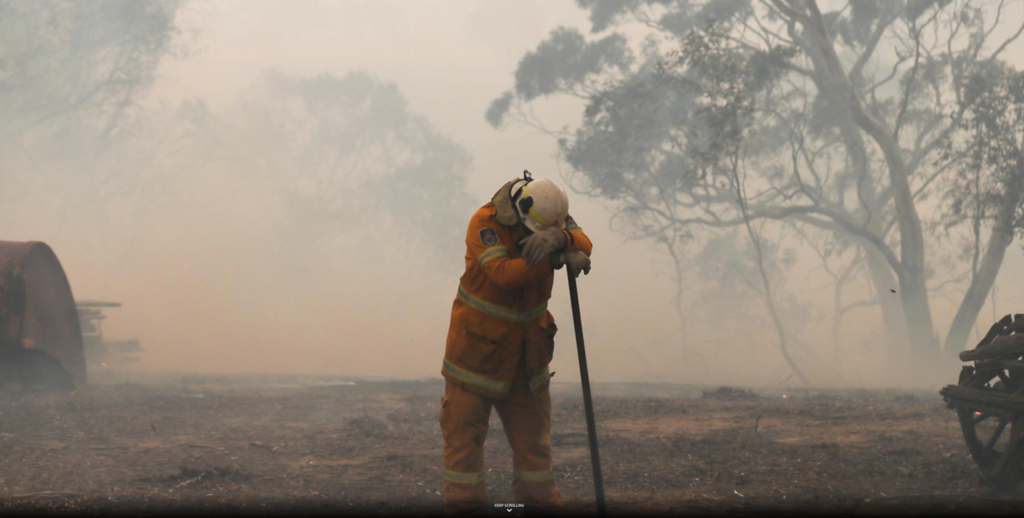 Excellent photography, Murray and Antonio and exactly what photographers are so set to do:

“Hold up a lantern to the Earth we choose to dominate”

From here, it seems that the newspaper magnate Murdoch might have better used his pulpit!

Why should it wait until lives are lost, farms are destroyed and millions of wildlife are burnt alive?

How can policies change if the most powerful news sources don’t highlight the threats and search experts for solutions, well in advance?

News has a job of making money entertaining us, of course!

But ignoring a brewing storm like this for many decades?

Again, thanks for the amazing but chilling images!

That's a great and very powerful link Antonio. Both the images and the text. I hadn't seen that one.
A

And according to the Bureau of Meteorology, the hot dry conditions are likely to last until the end of April, so that's ten months after the first fires of this season started.

Antonio Correia said:
I invite you to see this series of images by several Australians photographers

I'll be attending the opening in Canberra of an exhibition by one of these photographers, Nick Moir, next weekend.
A

Murray, I’m in Canberra, we should meet up there.
A

I’ll be wearing a pineapple shirt, you’ll be the one who looks like Bruce Pascoe!

An carbon monoxyde, as seen from space a few hours ago. 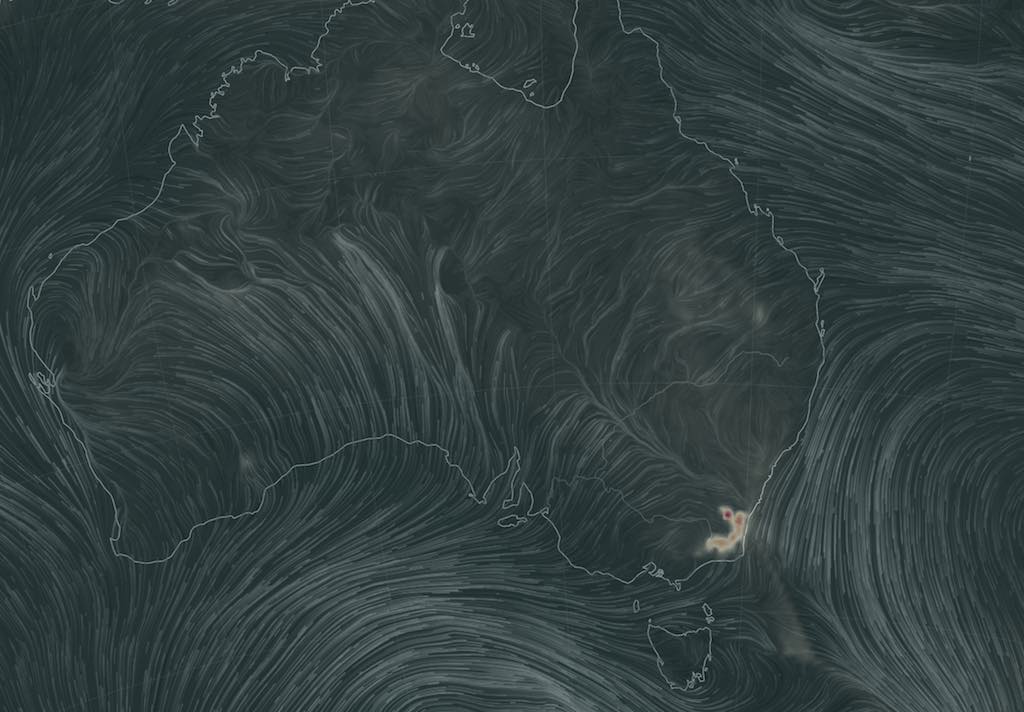 The solid white on the Eastern Coast is a stunning revelation!