Authorship? Whose Work is it when the photograph gets copied in someway or other?

Duke Beattie said:
You can make big money if you you choose your subjects carefully...
http://www.nytimes.com/2007/12/06/arts/design/06prin.html?_r=2&ref=todayspap&oref=slogin
If you go here-- http://www.richardprinceart.com/index.html
You will see very expensive pieces of 'art'..
Click to expand...

I'd have thought the body of law would now be clear. Prince has gotten away with taking other photographer's work by considering advertisements has "having no author", although he reportedly settled privately on some occasions. 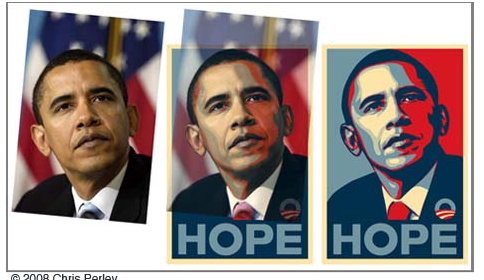 Aphotoeditor: Chris Perlev​
Shephard Fairey not only used the photograph from AP for his iconic poster, "Hope"

Source in quote below​
He also is now on probation for wantonly defacing buildings with his art!


The street artist behind the iconic poster of Barack Obama entitled 'Hope', which became a symbol of his election campaign last year, has been sentenced to two years' probation in Boston after pleading guilty to charges of vandalism.

Shepard Fairey, who had posted his work on buildings around Boston, pleaded guilty to one charge of defacing property and two charges of "wanton destruction of property" valued at under $250 in exchange for the prosecutors dropping 11 other charges. Fairey (above, in front of his poster, 'Hope') was arrested in Boston in February as he arrived at the Institute of Contemporary Art for the opening-night party for a retrospective of his own work. He issued a public apology to the people of Boston for "posting my art in unauthorised spaces without the consent of the owner" after being placed on probation and ordered to pay $2,000 to a graffiti removal organisation. He was also banned from carrying materials that could be used for graffiti. Source​
Time Magazine has commissioned him in 2008 for the Barack Obama picture for its front cover. But wait a minute, where did he source the picture? It came from the AP and he is now suing the AP for copyright ownership of the artwork. A quote from Fairey referencing "respect for private property" after his grafitti conviction, is worth reading, (how is it that respect does not extend to the original Photographer Mannie Garcia?) :


"Freedom of expression is the bedrock of our democracy," he added. "However, I also believe it is important that people respect private property and do not use it without the authorisation of the owner."​
This assembly of succinct comments from diverse sources appeared in the Philadelphia Enquirer Blog:


Photographer Mannie Garcia had this to say over on Tom Gralish’s Philadelphia Inquirer photographer blog:

“Of the iconic poster he said, ‘I’ve been on the campaign for twenty something months, so I would see the artwork, I would photograph it, and think what is with this image? But it didn’t snap. It never occurred to me it was my picture. I thought, ‘that’s familiar.’ I would see it and say that’s cool, but it did keep sticking in my head.’ He was quick to add he is not mad at Fairey, and he’s not looking at any lawsuits. ‘I know artists like to look at things; they see things and they make stuff. It’s a really cool piece of work. I wouldn’t mind getting a signed litho or something from the artist to put up on my wall.’”

“I talked with him again this morning, and he is still proud his photo is the basis of the painting that now hangs in the National Portrait Gallery, a part of the Smithsonian Institution, in Washington, DC - the first portrait of the new president to enter the national collection.”

I followed a post by Carolyn E. Wright of the photo attorney blog where she brings up “thin copyright- where there is not much original copyrightable expression in a particular work” (here) to a discussion on Madisonian.net (here) where a commenter (Bruce Boyden) has this to say:
“The third and most difficult question is whether the copyrightable elements in the photo have been infringed by the poster.”

“To figure out the answer to that, you have to do more than just hold the images side by side. That’s because there’s a lot about the photo that is not the creative work of the photographer and therefore not copyrightable — and copying that stuff is not infringement. E.g., Obama’s face. Drawing Obama’s face does not infringe on this photo.”

“Once you’ve figured out the creative bits that the photographer contributed to the photo, the next step is to figure out if *those bits* have been substantially copied by the poster. ”

and Carolyn had a comment earlier in the thread where she says:

“It’s a common excuse for copyright infringement - the photo wasn’t anything special and anyone could have shot it. That begs the question - then why didn’t they?”

The Art Law blog has more (here) including this tidbit:

“”This would be a tough fair use argument to win because the ‘transformation’ is purely in the look of the work, not the purpose… campaign posters are certainly a reasonable and traditional market for licensed uses of photos, so there’d be a strong argument for market harm”

which leads to this from Time magazine (here):

“I would think Fairey would not have much trouble proving that it was his pulsing three-color reinterpretation of the Obama photo that elevated it from press conference news photo to icon.”

and finally a bunch of law professors get in on the debate (here):

“changes in color and style have been held not fair use before, see Rogers v. Koons”

I am of course fascinated by the debate… you may not be.​
I've tried to simplify some of the pillars of the discussion by quoting in red. What surprises me is that the law still is being made up as we go! I'd have thought that Prince would be disgraced and Fairley shared the copyright with Mannie Garcia.

Now it appears thay Mannie himself is joining the law suit on the side of AP since he cannot afford to have the © go to AP or to Fairley! If he's not part of the current fight, then in the future he has zero standing! So, right now he has to block Fairley and then in a countersuit he's also challenging AP's assertion that he was at the time of the picture, their employée!