Following up on my post "Cheap Christ" here is a much more impressive religeous souvenir shop in the small city of Buga, Colombia. 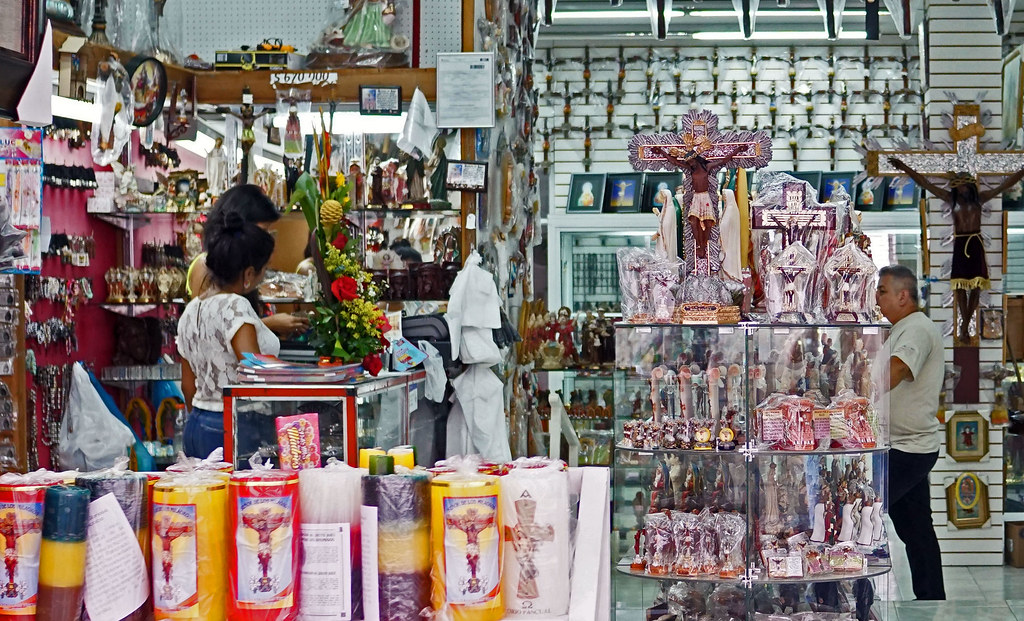 You may note, stage right in the image a crucifix which appears to be fringed. The "fringe" represents flames and here is the story.

In 1580 an elderly Indian washerwoman was washing clothes in a stream when a small wave washed up a little wooden crucifix. She took it to her shanty home and improvised a little alter to display it. Some days later she heard knocking sounds coming from the location of the crucifix. When she viewed it some days later she was surprised to see it had grown in size. After a week or so the crucifix had grown to more than a meter and she informed the Jesuit priest. Word spread and many Indians and others came to witness and worship it. The Catholic priests were alarmed by this unauthorized devotion and tried to burn the crucifix but while it was in flames it began to sweat copiously and devotees came with cotton to absorb it to use in curing ilnesses. That is the miricle of the Señor De Los Milagros De Buga. An un unabbreviated version is here in Spanish:

What a rich folk law and tradition. It’s quaint and beautiful.

The imagination does play tricks on us. But if it ends up with works of art that somehow give folk entertainment and more hope, great!

Certainly the Catholic Church is kept busy dealing with demons and Satan the prince of power on earth.

They have specialists trained in recognizing miracles and others who can exorcise demons completely from the possessed.

Miracles, rare events that defy our expectations based on probabilities of some event happening, we might consider plausible for that situation.

But for rational thinking, the occurrence of one rare event doesn’t of necessity presage such events are more likely to recur.

With “miracle cures”, attributed to intervention by an apparition of The Virgin Mary, (or someone else endowed with spritually saintliness), there’s an expectation by believers, that visiting that blessed spot would confer on the devotee, the cure or blessing they seek!

Such activity by the Catholic Church might perhaps be a hold-over from early church customs and beliefs which found fertile ground within the newly conquered cultures of the Spanish and Portuguese colonies in South America.

I would like to doubt there is such belief in such spirits outside the Catholic Church.

But I have to admit, even among atheists, it seems, such magical thinking is more common than we would want to admit!

It seems we blend fears and dreams with reality and so are susceptible to shamans and fraudsters. Con artists or bombasts don’t have to work hard to sell us diagnoses of physical or societal ills that they happen to be so uniquely powered to cure!

Thanks, Peter for reading my far from brief comment.

But whether I look at the blessings or Rabbis or assurances of politicians, it’s not lies at work as much as self delusion of insights that are simply not true!

It’s timely to weigh the influence of magical thinking on our behaviors!