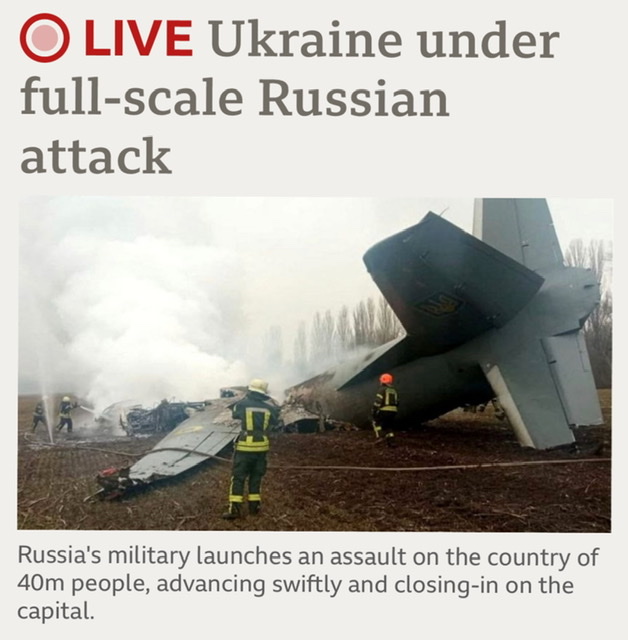 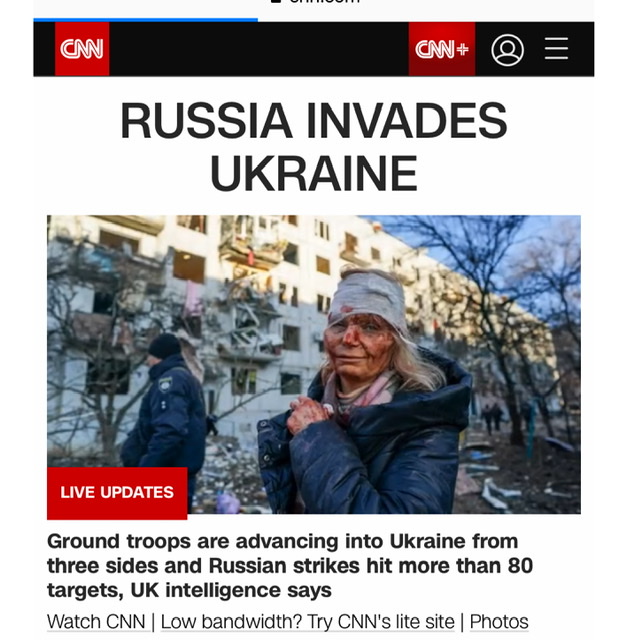 lets see how this works out for Putin in the long run.

Steven Sinski said:
lets see how this works out for Putin in the long run.
Click to expand...

Obviously Putin prepared for sanctions with a 600 Billion US dollar foreign reserves and a non expansive economy.

So yes, it has to play out a long tome.

The financial companies behind liquid gas markets have diverted a bunch of giant tankers to Europe.

This is a windfall in profits that will finance new Liquid Gas terminals in the USA and new tankers too.

Furthermore, the natural gas is being designated as “green” so dependence on Russian gas will be ameliorated over the next 6 months to 2 years.

So, where are we now after one day of Russian multi-pronged armored invasion of Ukraine?

They haven't made spectacular progress but have only sent in a fraction of their massed forces surrounding the country.

No doubt, US intelligence is providing information on incoming missiles and armor. Ukraine forces have not melted away under attack.

What will count is the West’s ability to resupply weapons, ammo, fuel and food after a week of conflict.

With Russian armor in the cities, Ukrainian guerrilla fighters with anti-tank weapons can do a lot of damage, even as the Russians advance, block by block!

So, if decapitating the Kiev government is not achieved with special ops/assignation units, then massive bombardment, as in World War II could lead to leveling of Cities!


In all this horrible present situation, in retrospect, one has to ask, “What exactly did Ukraine gain by giving up Nuclear Weapons in the Budapest Agreement?

After all, The USA, Russia and The U.K. Guaranteed Ukraine’s sovereignty and territorial integrity in return!

As usual, the situation is a bit more complex than it looks. Russia had all reasons to oppose Ukraine entering NATO, which is what we were talking about last month. Western Europe is dependent on Russian gas and ships will not replace this any time soon. The US fought against the north stream pipeline, which coincidentally was just finished last month. Ukraine themselves did not see that project with joy as their economy is dependent on gas transit taxes. The eastern part of Ukraine greeted the Russian army with champagne (from Crimea, I suppose...), so the notion of "invasion" is a bit peculiar, at least in these areas.

In any case, the Russian army is massively superior to the Ukrainian army. So whatever happens will happen fast.

Here is an interesting link. How times change... 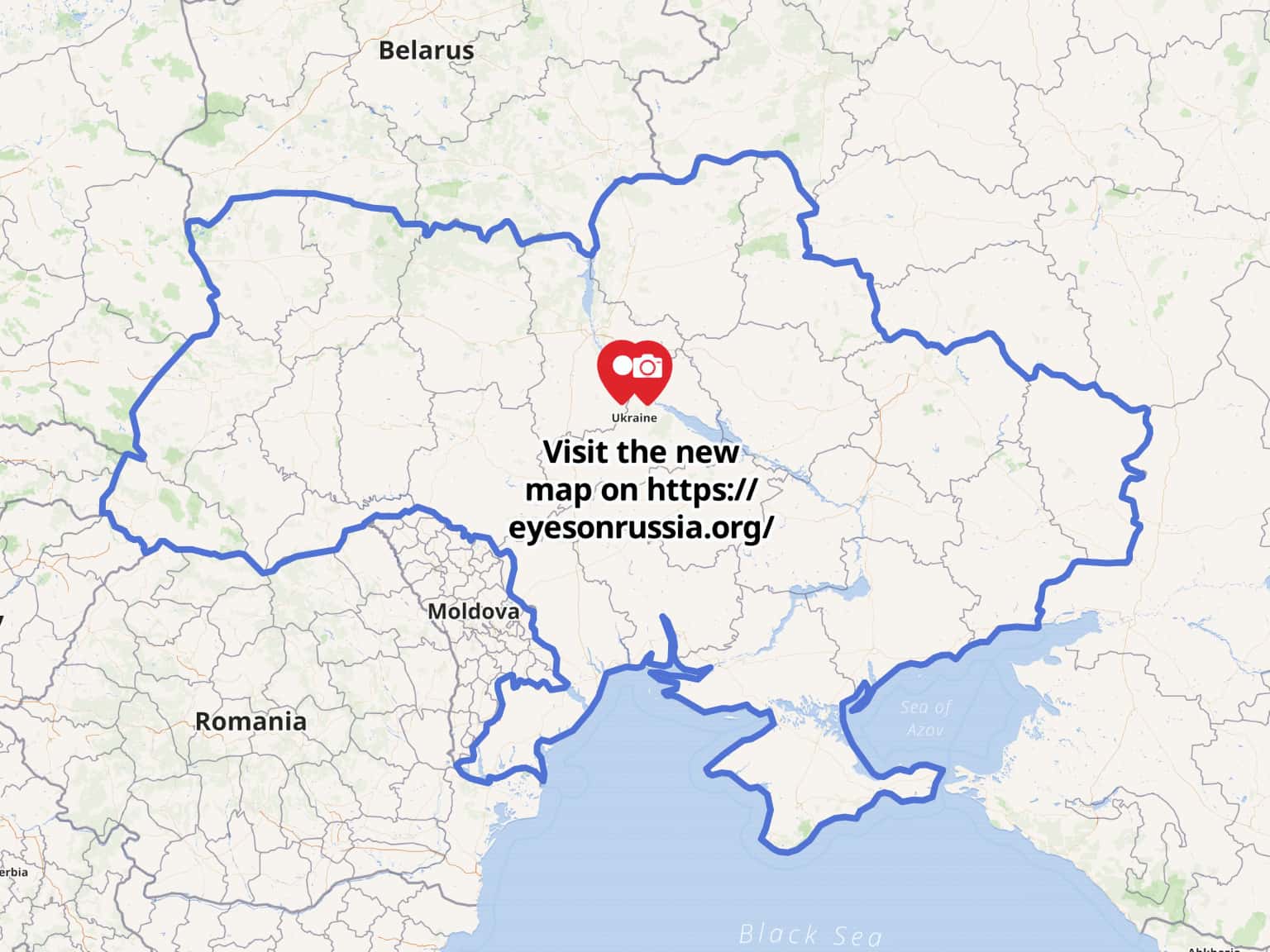 Eyes on Russia: The Russia-Ukraine Monitor Map by Cen4infoRes · MapHub

The Russia-Ukraine Monitor Map is a crowdsourced effort by the Centre for Information Resilience as part of the 'Eyes on Russia' project. We work with Bellingcat, GeoConfirmed, Conflict Intelligence Team, Advance Democracy and the open source community to map, document, archive and investigate...

Any discussions that look at such maps?

Russia’s is tricking it’s one year conscripts as they illegally move them into harms way into Ukraine.

By law, Russian one year conscripts conscripts for military service cannot be sent to an active war zone. They first have to willingly volunteer for the professional army.

So officers are simply stamping their ID cards that they “volunteered”!

But they also are hiding the true costs in lost soldier’s lives! 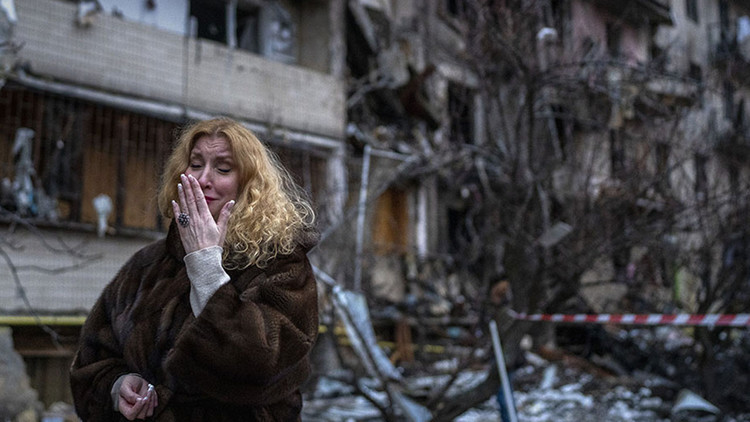 Russia’s cache of weaponry and machinery includes a mobile crematorium, which is mounted on a vehicle and can be deployed if needed during the ongoing, devastating invasion of Ukraine, Fox News has confirmed.

I have no idea whether mobile crematoria are standard equipment in modern conflicts. Do you?

In a nutshell: if you follow the news, you will be faced with such piece of information which, taken without context, are designed to stir your feelings against Russia. Even if Russia probably deserves these feelings considering recent events, these feelings won't help us.

The real situation is as follows:
Now, the real question is: what is Putin's plan? He is obviously interested in keeping NATO's away from Russia's immediate borders, but what else? The plan could involve:

The ethnic Russian argument is an excuse, not a reason! 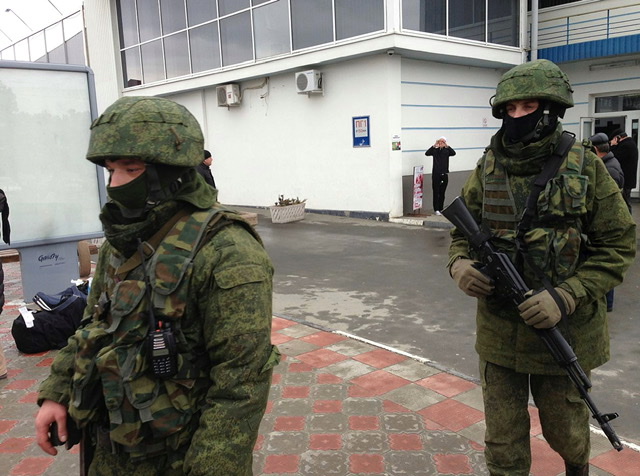 without “the little green men”, there would be no separations! 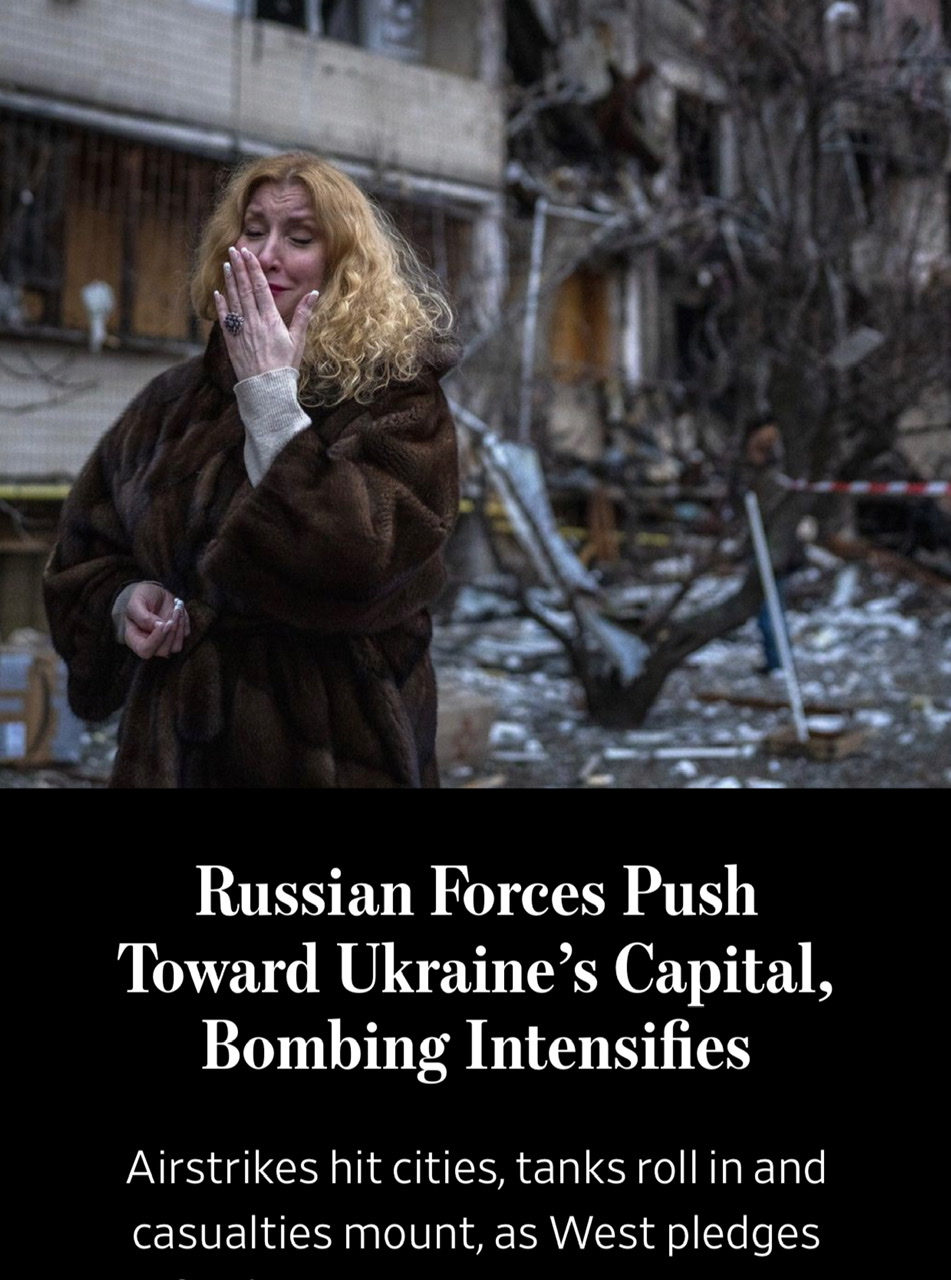 Asher Kelman said:
The ethnic Russian argument is an excuse, not a reason!
Click to expand...

Don't you think that the Russian population will be content with their government if they do nothing when the Russian speaking population in east Ukraine is forced to speak Ukrainian, for example?

“The Ukrainian capital is transformed into a battle zone as Volodymyr Zelensky, the president, warned against false reports of his demise. NATO leaders said more troops would be deployed.” (NYTimes)


Zelensky has kept himself with his generals in Kyev and has proven to be a rallying g figure for the nation! 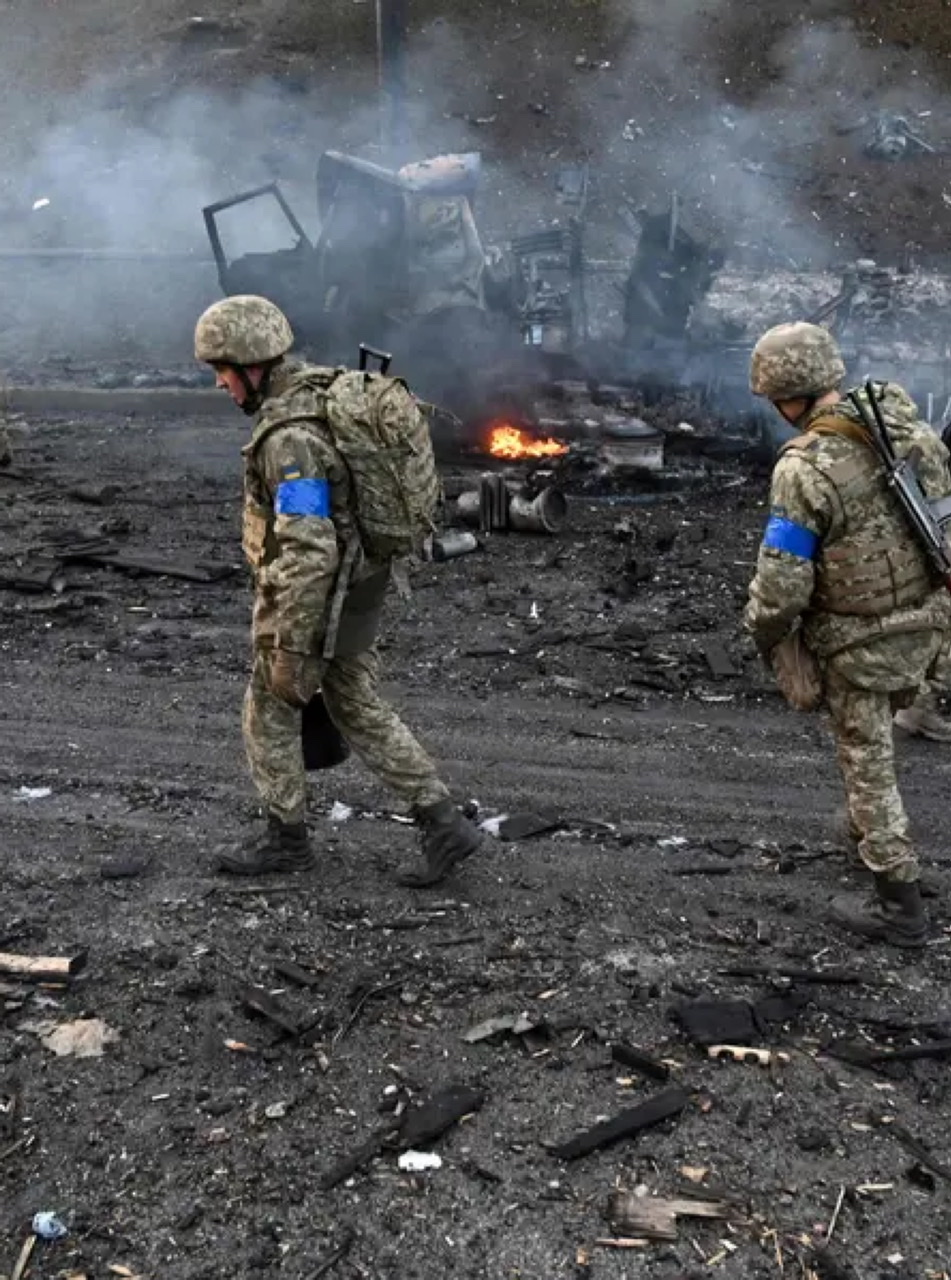 This is quite a narrow crop for an image.

What do you think about the nuclear plants and the dangerous occupation of Chernobyl ?

Ukraine presently has 15 nuclear power plants in operation, producing about 50% of the country's electricity: 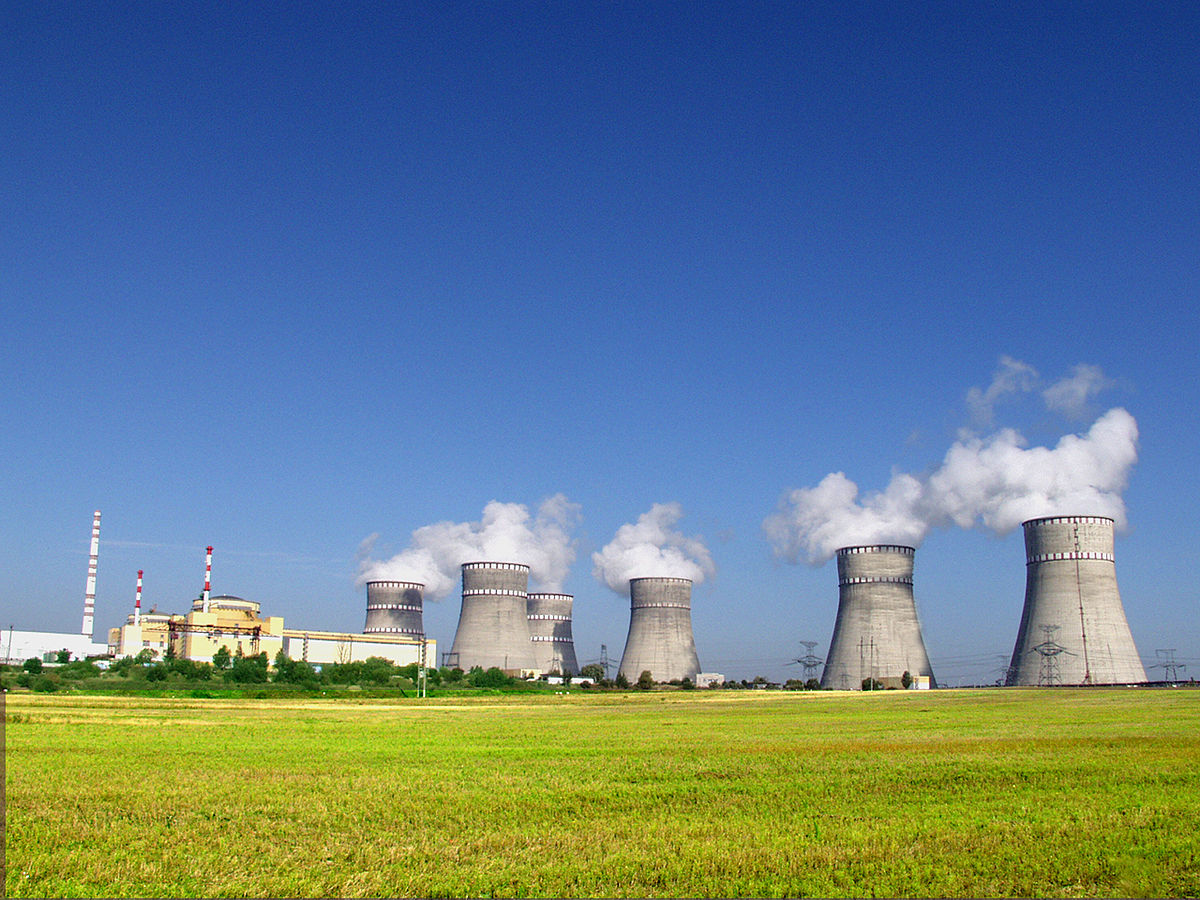 Yes Jerome, but Russian have occupied Chernobyl increasing the nuclear pollution in the area.

The link you cited explains that it is probably soil disruption by heavy military vehicles and no cause for much concern. I would imagine the Russians know about Chernobyl, as they were deeply involved in the cleaning at great financial and human cost.

Antonio Correia said:
Yes Jerome, but Russian have occupied Chernobyl increasing the nuclear pollution in the area.
Click to expand...

I think it’s so important and at risk, that they felt it was best to remove it from the war equation by grabbing it.

I wonder whether the particular tanks that entered had HEPA and carbon filters for nuclear conditions!

Asher Kelman said:
I think it’s so important and at risk, that they felt it was best to remove it from the war equation by grabbing it.
... Asher
Click to expand...

Aren't you being a little naive ?
Chernobyl was on the best way to the capital !


Asher Kelman said:
... I wonder whether the particular tanks that entered had HEPA and carbon filters for nuclear conditions!
Asher
Click to expand...

Antonio Correia said:
Aren't you being a little naive ?
Chernobyl was on the best way to the capital !

So are you implying, of course they were or the opposite?

In Soviet era planning, infantry and tanks were like ammunition: one just needed a large supply!

They are/were not worried about the potential risks but only the efficacy of the military action.

This reminds me the barrels US throw into the Pacific Ocean with nuclear components or the great, great, great problem Tesco has with contaminated water from Fukushima.

Antonio Correia said:
They are/were not worried about the potential risks but only the efficacy of the military action.

This reminds me the barrels US throw into the Pacific Ocean with nuclear components or the great, great, great problem Tesco has with contaminated water from Fukushima.
Click to expand...

Probably correct. But they plan to stay in the area and don’t want the radiation to be drifting over Russia again!

Don't you find it a bit surprising that communication infrastructure including the Internet is still working in Ukraine?

Jerome Marot said:
Don't you find it a bit surprising that communication infrastructure including the Internet is still working in Ukraine?
Click to expand...

The Russians thought they were going to control the cities in two days and install a Moscow friendly government right away, so they wanted to keep everything intact as possible!

But if they are bogged down, their tanks are sitting ducts for the brave home defenders with newly supplied armor piercing weapons pouring in daily in increasing numbers. 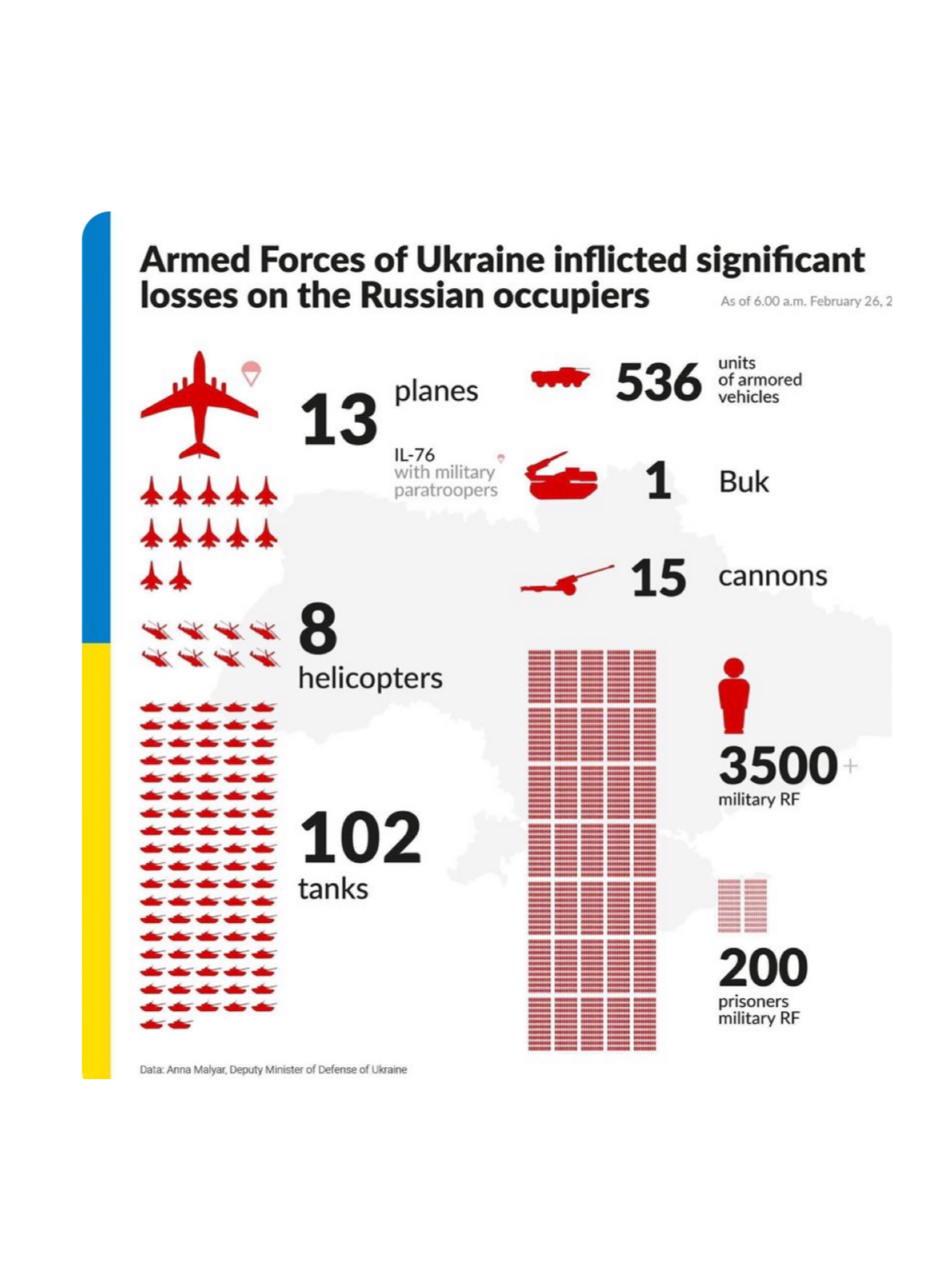 At the same time Ukrainian losses are significant according to Moscow’s claims: 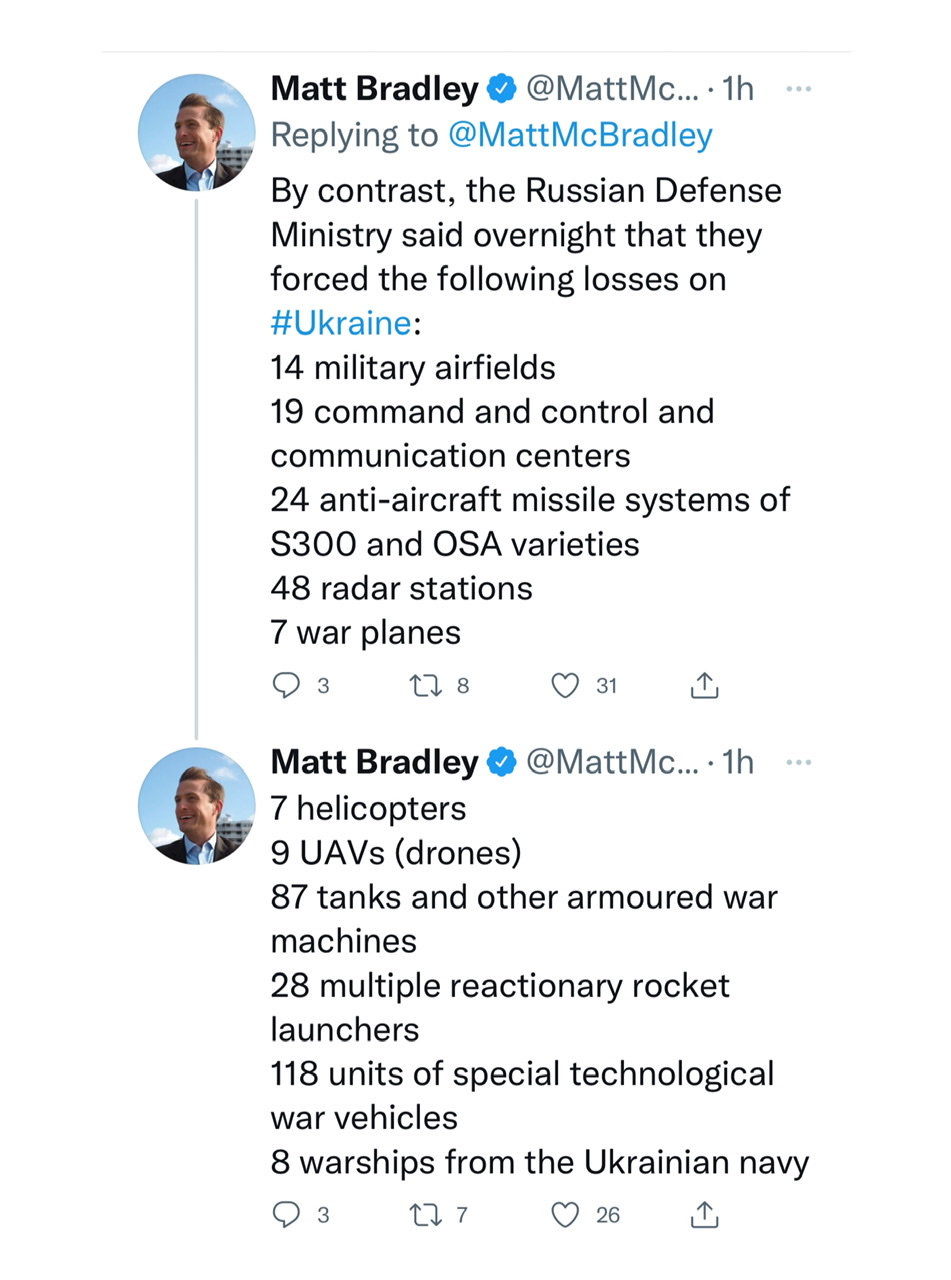