Michael Nagel's admiration and pictures of a mechanical watch, reminded me of the forgotten art of time dissection and prediction by the ancient Babylonians and Greeks. Crete 2 millennia ago, was a center admired for mechanical inventions with objects that could bend and move. An accident of weather and a decision by a ship's captain to sponge dive, led to a treasure trove of statues and artifacts from 100-1`50 B.C.E. Only later, did someone notice that an Athens museum collection had gears embedded in the crusted brass object! That discover has precipitated a century of sleuthing and scientific investigation as to the structure and purpose of the machine.

In an exciting link up between high-tech industry and international universities, including Cardiff, Athens and Thessaloniki, the secrets of a two-thousand-year-old astronomical calculating device, the Antikythera Mechanism, are exposed for the first time with a unique 400kV microfocus Computed Tomography System. 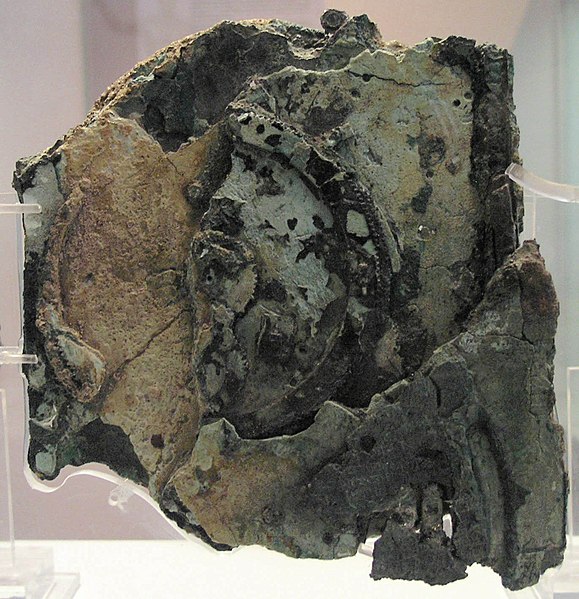 X-Tek’s 400kV microfocus CT equipment has been used to probe the secrets of the ancient artefact, estimated to date from around 80 BC. Discovered in 1900 AD in a shipwreck in the Greek islands, the Antikythera Mechanism contains over 30 gear wheels and dials and the remains are covered in astronomical inscriptions. It may be a device to demonstrate the motion of the Sun, Moon and planets, or to calculate calendars or astrological events.
Although the Mechanism is no bigger than a shoe box, it is too priceless and unique to leave the National Archaeological Museum in Athens, so a major expedition in late 2005 brought an X-ray tomography machine, weighing over 7.5 tonnes, to examine the artefact in Greece.
X-Tek’s imaging equipment has been instrumental in advancing our current understanding of the Mechanism. It was originally thought that the CT results would be vital in providing good images of the gear train, allowing researchers to obtain good teeth counts for the Mechanism's gears, and finally resolving any arguments regarding the relationships between the gears. The CT results have achieved this, and much more. The results have revealed many more details of the mechanism, including the so called 'pointer-follower' in Fragment B which allows the back dial to be interpreted as spiral dials, not circular dials as previously thought. The 3D CT images have also revealed the pin and slot mechanism that has allowed researchers to discover that the Mechanism models the first anomaly of the Moon's motion.
However the great surprise has been the ability of the CT results to show hidden inscriptions in many of the Fragments. In the case of Fragment G this is exemplary: Price (1974) notes that its inscription is “almost illegible’, reading only 180 characters. The CT images, viewed at various angles, enabled the research project to read 932 characters. Looking at the data with X-Tek, academic principal investigator Professor Mike Edmunds commented, "The outstanding results obtained from X-Tek’s 3-D x-rays are allowing us to make a definitive investigation of the Mechanism. I do not believe it will ever be possible to do better." Source

Thus far, it's agreed that the device was used to predict positions of the 5 known planets and the months and leap years based on all known science at that time. It was not too accurate as the theories then of Martian movement in the sky were not well developed and so it's accuracy for Mars was 35% off at times. Otherwise, it was pretty consistent with what we'd expect for predicting all the main celestial events needed for commerce, festivals and sports at that time.

It was designed to be compact and of use for the educated but not expert astronomer or traveler as it has a manual of at least 2,000 words in Greek craved into the brass plate.

Fascinating. It puts into perspective all the harm that the dark ages caused science.

Ben Rubinstein said:
Fascinating. It puts into perspective all the harm that the dark ages caused science.
Click to expand...

Think of all the time it took till we had a Galilleo have enough boldness to stand up argue from first principles; of observation. The pendulum timing is independent of the angle of displacement, until it stops!
That one observation allowed accurate clocks!

Galileo Galilei (1564-1642) was a Tuscan (Italian) astronomer, physicist, mathematician, inventor, and philosopher. He was born in Pisa, and was the oldest of six children in his family. When he was a young man, his father sent him to study medicine at the University of Pisa, but Galileo studied mathematics instead. He later became professor and chair of mathematics at the University. Until about 1609 he taught mathematics, and made several discoveries in physics. He helped to mathematically describe ballistics, and the force of friction as it relates to motion. After experimenting with moving objects, he established his "Principle of Inertia", which was similar to Newton's First Law.

Galileo then became interested in optics and astronomy, and in 1609 he built his first telescope and began making observations. The following year he published his first results, where he described the highlands and "seas" of the Moon, four of Jupiter's largest moons, and many newly discovered stars. He also discovered the phases of Venus and sunspots, thereby confirming that the Sun rotates, and that the planets orbit around the Sun, not around the Earth. But Galileo thought that most planetary orbits are circular in shape, when in fact they are elliptical, as shown by Johannes Kepler. Still, Galileo's observations have confirmed Copernicus' model of a heliocentric Solar System. They refuted the basic principles of Ptolemean cosmology, and put to rest Aristotle's theory that the heavens were "perfect and unchanging", which was supported by the Catholic Church. But the Church still allowed Galileo to conduct his research, as long as he did not openly advocate his findings.

In 1632 Galileo angered the Pope when he published a book in which he openly stated that the Earth was moving around the Sun. He was put on trial by the Inquisition in Rome, where he was found suspect of heresy, and forced to say that all of his findings were wrong. He was first imprisoned, and later confined to his house near Florence.

During the last ten years of Galileo's life, the Church monitored his travel and communications with others, and his writings were censored and placed in the Index of Prohibited Books. Galileo continued to write about physics, and in 1632 he put forward his concept of Basic Relativity in physics, which may be stated as follows: "the laws of mechanics will be the same for all observers moving at the same speed and direction with respect to one another." This fundamental concept later formed the basis for Einstein's Special Theory of Relativity. Source.


So imagine how hard it was to catch up with what was lost when the greatest library collections ever were burnt in Alexandria through the ages, although who did what is not clear!

Thank you for that Asher, I did know of his story but it was interesting to reread it. What is fascinating is how the technology was lost in between the Greeks and the dark ages. Who was suppressing the knowledge, did the Romans do that or was it just too much time and too many wars?

In our own culture it is well known that for all the vast repository of Judaic texts and writings which are still extant, far more than we have today has been lost throughout our turbulent history. For example more than half of the Jerusalem Talmud was lost due to the Roman repressions following the Bar Kochba revolt, significant portions of the Talmud, its commentaries and portions of prayers were censored by the church and although in my day job we are working hard to bring to light hundreds of years of hidden writings from the Middle East, it is just a tiny fraction of what has been lost. In Europe of course the few works, ancient works, we have from there are hugely fragmented and far too many bear the scars, literal scars, of pogrom and holocaust. The burn marks are scary in their portrayal of such evil times.

How much knowledge, how much betterment of mankind, has perished in the fires of war or religious intolerance? How much has just faded to dust from lack of interest or understanding?

Perhaps my imagination is just too vivid or it is due to the fact I deal with such artefacts every day but the mind boggles at how much culture and knowledge has been lost for all time.

Just stop everything you are doing. Transport yourself back in time. Imagine you had to make this?

Now imagine, you did not know much of how to go about it, or why, or how.

Now imagine the ingenuity of those that created it.

It takes us the best in science to figure out what someone did thousands of years ago.

Just imagine. You have only paper and pencil, and your mind. What can you think of?
B

Now imagine that you are very intelligent. Could be a senior programmer for a big games giant, a top medical researcher for a large pharmaceutical firm, etc, etc. But you were born in an age two and a half millennia ago where the physical prowess of man was considered one of the only worthwhile goals, were the glory of war was considered an ideal. You have the same brain but very little to do with it, to achieve. I've never been amazed at what the giant thinkers of a previous age managed to accomplish. Without the distractions of the present day world, TV, the internet, the goal of leisure and similar time wasters, with the urgency caused by not having the worldwide melding of minds that is the reality of today, is it any wonder that intelligent thinkers and practitioners were able to achieve such leaps of imagination? It is only a wonder that there were so few and it took so long. I have no doubt that the distractions due to the continuation of the secular thought embodied by Greek and Roman culture mixed with religious persecution and the fight against progress (the protests against the Industrial Revolution in the UK are a good example of this) and the political will to suppress progress which would have granted equality, all were the reason why it took millennia to reach where we have today.
You must log in or register to reply here.
Share:
Facebook Twitter Reddit Pinterest Tumblr WhatsApp Email Link
Top