23rd July, the day after.
There was a procession of people walking around the sealed off perimeter with tiny cameras. I kind of did my "penitence" with the norma 8x10 on my shoulders.

On this picture, you see journalists, then the cordon with military (kids, really, with guns). Flowers are at the foot of the traffic light.

I am on top of stairs of a church. I always cycle past this and turn left. Sometimes if I need to by something, I cycle straight down and turn left at the bend, in between the bits sticking out: this is where the blast occurred. 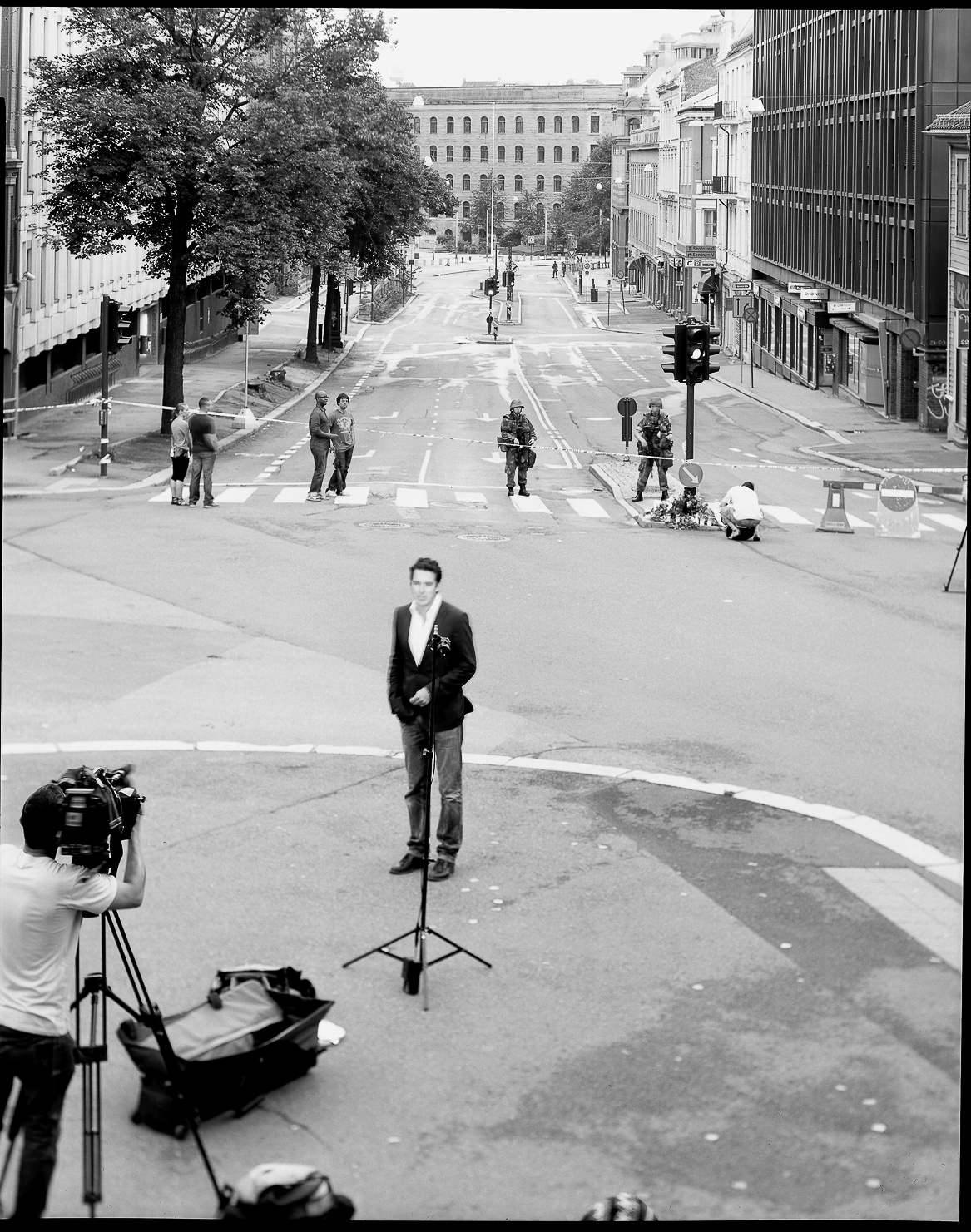 Background: the building that was targeted. The blast occurred behind it. The security guys are sitting on some stairs leading to some nice columns.
This is actually a nice area, where I always thought I'd come with a model and take pictures. Especially of that building targeted: it has a shallow fountain making some kind of mirror.

One street behind is a square (Youngstorget) where there are nice cafes. As of today (26th July), they are still off limits. 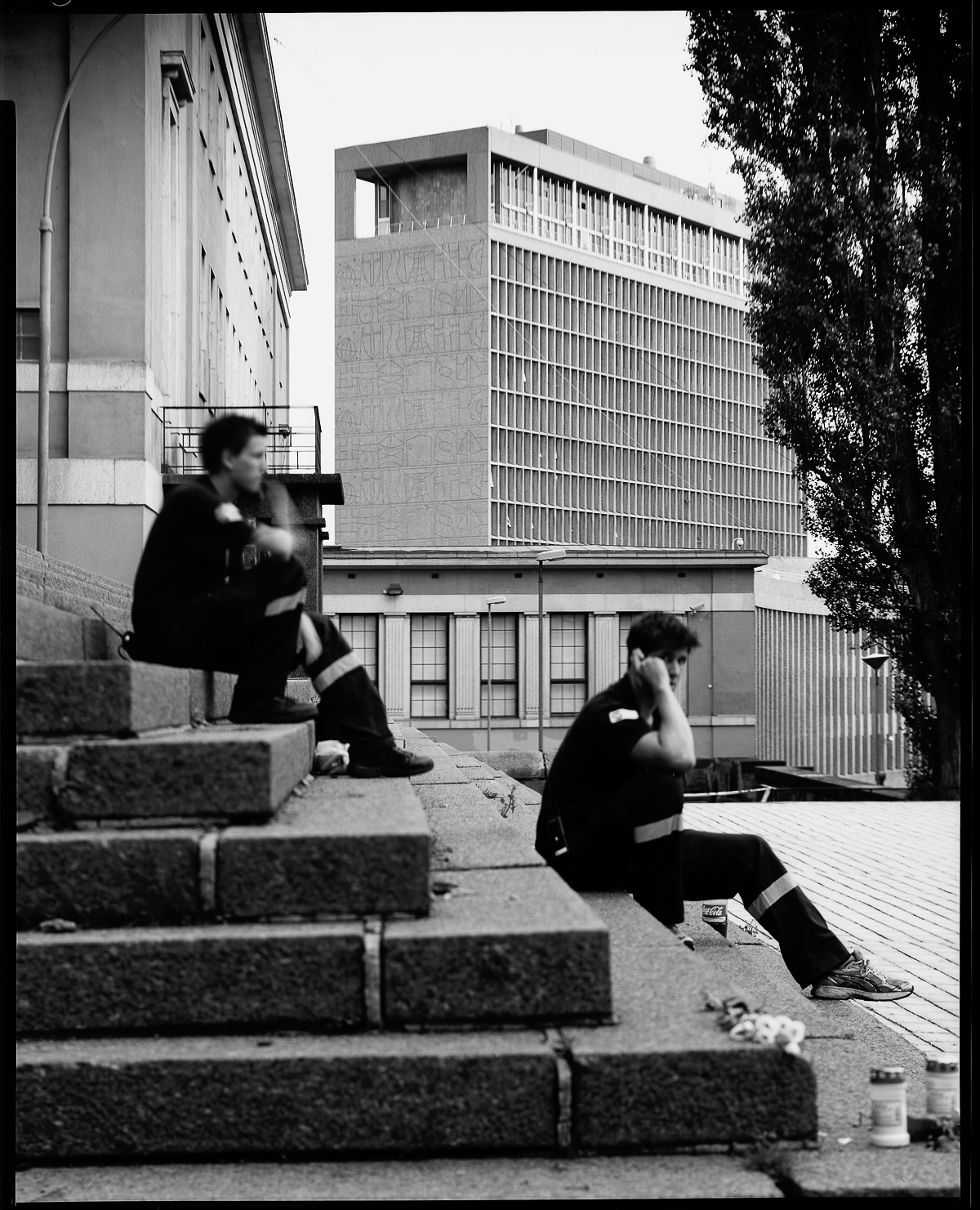 The bomb exploded in that street. You can see the helicopter pad of the oil ministry (and in the full res the rescue unit on the balcony). 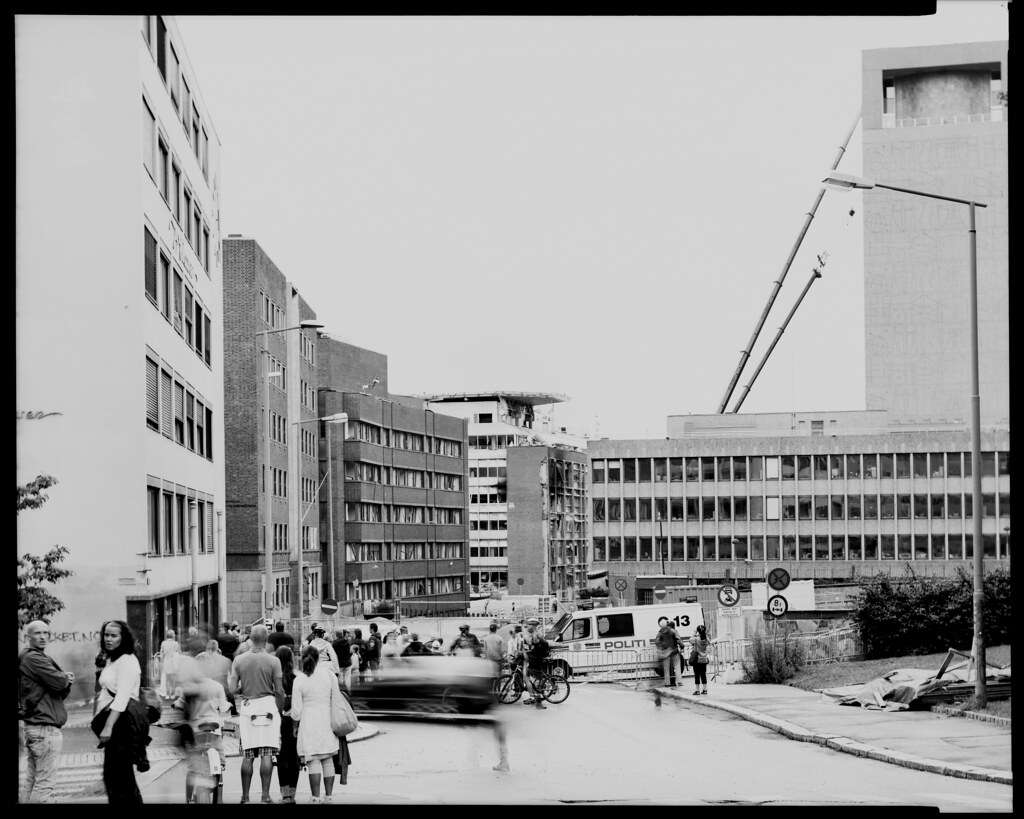 The car exploded behind this building (high resolution here) 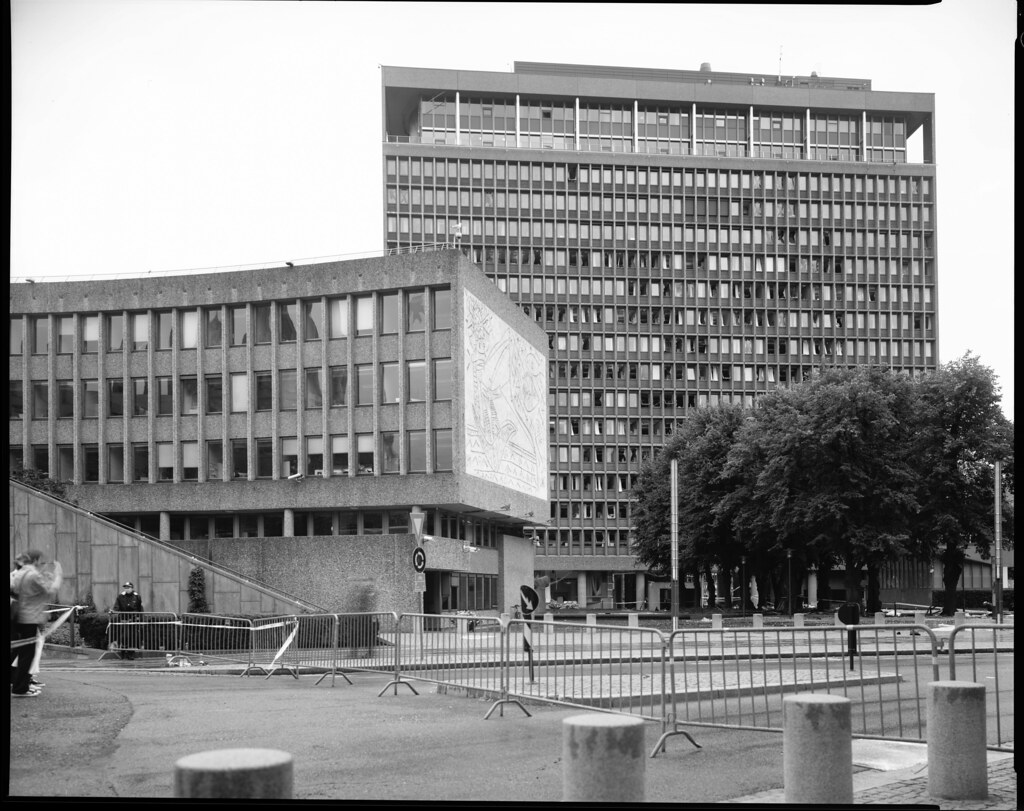 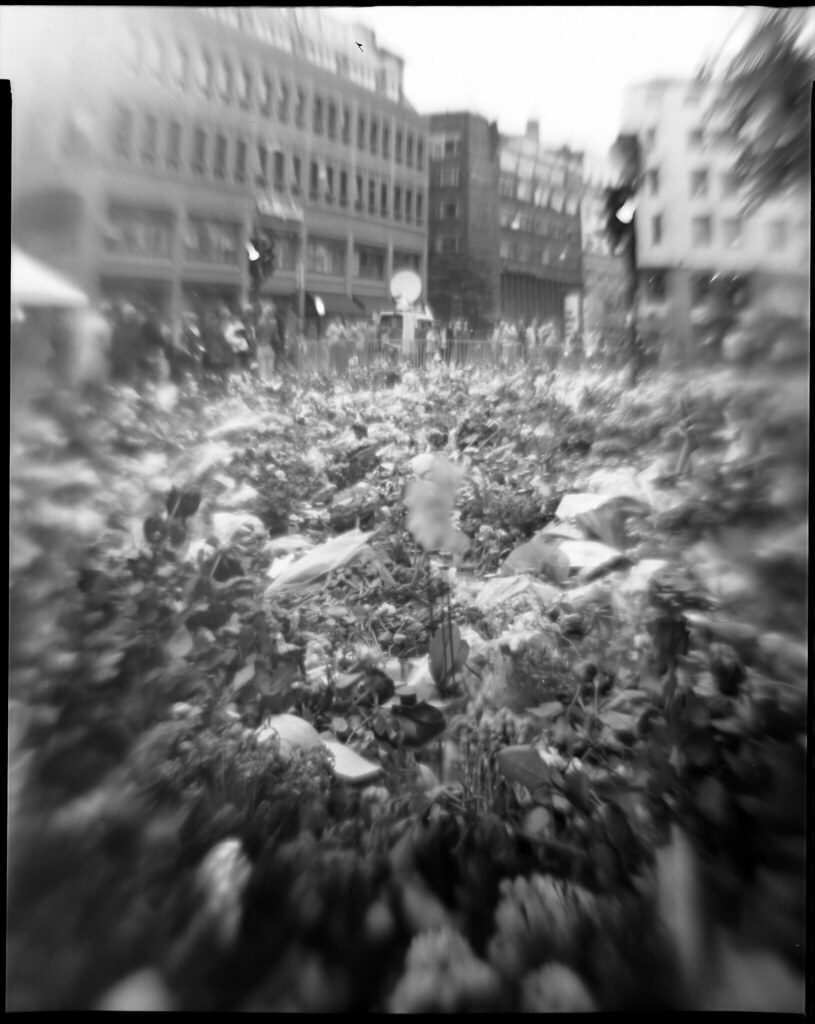 I was processing film when I heard a loud sound that made the window shake and made me jump. I did not realize it was a blast 1 km away until I read the news. Sky filled with helicopters and with the sound of sirens.

As if the blast was not enough, this demented bozzo opened fire at a youth rally and killed too many people trapped on a small island, one by one, during 1:30h.

I thought I was going mad with all this chaos around, feeling useless. Called a friend and went out for a beer to wind down. First time there was so few people in Grunnerlokka on a Friday night. I bet most were singles (like me).

People have felt the need to light candles in churches, deposit flowers in ephemera monuments, or just walk around. I chose to carry my 8x10 to document what happened here.

Thanks so much for bring such iconic and heart-rendering pictures to us. This tragedy tests us. The outpouring of grief and re-assertion of the commonality of humanity will overcome the evil behind this horror. Your work is important as a memorial and reminder to us. That you made these picture lugging around and 8x10 Sinar is remarkable!

More on flowers in a BBC report.
M

Thank you for sharing your pictures and thoughts.

I watched in horror on Friday night as information about the attacks unfurled. We visited Norway only two years ago and our hearts go out to you all.

You are welcome to leave comments, pictures and references as condolences to the people of Norway.

Visiting photographers, To get posting privileges, simply register with "Oslo" added to the "Interests" section of the form for rapid attention. We'd really like pictures that show us more of the people of Oslo.

I have been to Norway more than once. I know the warmth and friendliness of the people of Norway.
I also know the level of their tolerance for human beings.

Our prayers are with the families of the victims and the People of Norway.

May God give you all the patience and strength to see through this inhuman act of barbarism.

With our sincere wishes and prayers to and for you all.

In Memory of Oslo


By request of Asher Kelman

In Memory of Oslo
Charlotte Thompson​

In Memory of Oslo
Charlotte Thompson​
Click to expand...

A wonderful tribute. I'm glad to see your skills and heartfelt empathy and oneness with those mourning in Oslo and the entire people of Norway for the senseless and cruel loss of so many young lives full of great potential. You are talented and able to take inanimate objects to express your feelings and that's a gift!

It is wonderful to think of your impulse to go to the street with an 8x10 in "hand". You carry into the modern time some of the best impulses of photographers through the ages.

By the way, welcome to our forum.

In Memory of Oslo
Charlotte Thompson​
Click to expand...

Thanks for this wonderful display of your special insight and artistry.

Doug
Thank you- the work meant much to me!

I hope we see more tributes. Even a flower! We cannot just go after mementos, earning money, prettiness and beauty.

What a wonderful idea. The tributes are lovely.

I've posted this before, but it seems to fit here. 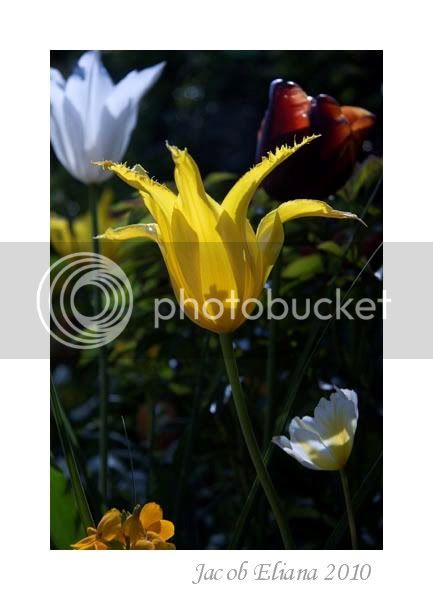 Rachel Foster said:
What a wonderful idea. The tributes are lovely.

I've posted this before, but it seems to fit here.

This picture has long mesmerized me with its symbolism. Fitting indeed for this time of respect and empathy. 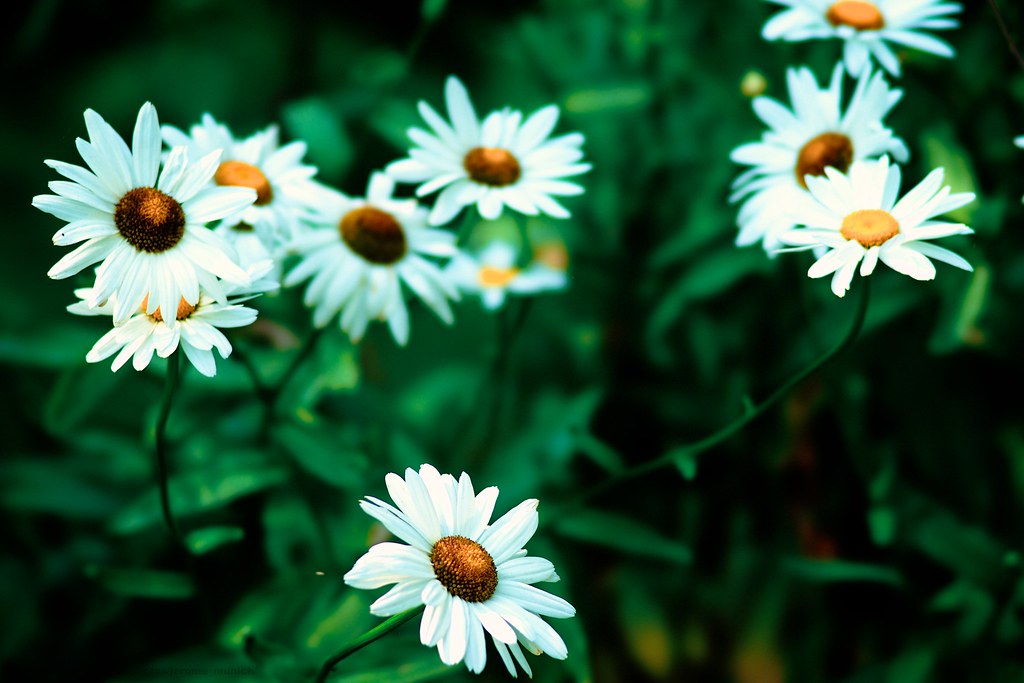 I have just returned from a much needed mini vacation . I went to Corpus Christi for 2 days. While running on the crystal clear waters and beach sand so very light and extremely happy I couldn't still shake all the feeling that stayed with me- "The Children" who died in Norway so morning after I returned I did another overlay to show how my heart still aches-

I love the daisies.

Asher, I thought the "cross" in the tulip was a good reminder that one extremist Christian does not represent Christians any more than extremist Muslims in the news represent Muslims.