I was shocked when a single worker died falling from scaffolding in the building of the Westside Mall, in Westwood, adjacent to Beverly Hills Ca going West towards the ocean. there's no memorial plaque and it's always upset me that scant attention was drawn to this tragic loss of life.

Today I read of more than 900 workers, mostly from Nepal and India, have died in the rush to build infrastructure for the world foot ball event in 2022 in Quatar. 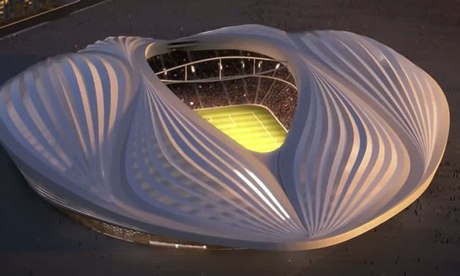 "In 2022, Qatar will host the World Cup. The host city has already made some waves with its stadium shaped like a certain body part. But what you might not know is that, since 2012, about 900 workers have died while working on infrastructure in Qatar, in a building boom anticipating the World Cup.*

Last month, the Guardian reported that over 400 Nepalese migrant workers had already died at building sites. Between 2010 and 2012 more than 700 workers from India lost their lives working on construction sites in Qatar, too. A report by the International Trade Union Confederation (ITUC) says that if conditions don’t get any better, by the time the World Cup kicks off, at least 4,000 migrant workers will have died on the job.

Robert Booth at the Guardian explains why Qatar is so unusual:

Workers described forced labour in 50C (122F) heat, employers who retain salaries for several months and passports making it impossible for them to leave and being denied free drinking water. The investigation found sickness is endemic among workers living in overcrowded and insanitary conditions and hunger has been reported. Thirty Nepalese construction workers took refuge in the their country's embassy and subsequently left the country, after they claimed they received no pay.

According to the ITUC, there are already 1.2 million migrant workers in Qatar, and about a million more will probably pour into the country to help with construction. These are essentially slaves, Sharan Burrow from the ITUC told Booth. “Fifa needs to send a very strong and clear message to Qatar that it will not allow the World Cup to be delivered on the back of a system of modern slavery that is the reality for hundreds of thousands of migrant workers there today," she said.

When presented with the results of the Guardian investigation, a spokesman from Qatar told Booth: “The health, safety, wellbeing and dignity of every worker that contributes to staging the 2022 Fifa World Cup is of the utmost importance to our committee and we are committed to ensuring that the event serves as a catalyst toward creating sustainable improvements to the lives of all workers in Qatar.”


I don't know what can be done, but it's seems totally correctable.

I'm reminded of Nobel prize-winner Konrad Lorentz's comment years ago that international sport may reduce political tension between countries. Whatever the validity or not of that hypothesis, this post raises the question of at "what cost?".

The cost is also the number of Bangladeshi workers killed and the salve conditions of the workers. They live in essentially concentration camps. the passports are taken away and they have no rights.

Now back to the USA, USC and UCLA are foremost in the world in many areas of Neuroscience, especially dementia following football injury to the brain!

Still the sport brings in hundreds of millions.

American football is an assumed part of college. But why? Its hypocritical and archaic!