I will shortly be putting up for auction on eBay an Anniversary series Speed Graphic (3¼”×4¼” format size) press camera, serial number 395280, made by Folmer Graflex Corporation in early 1946. It is equipped with a Graflex "flash gun" of the original design (see below). 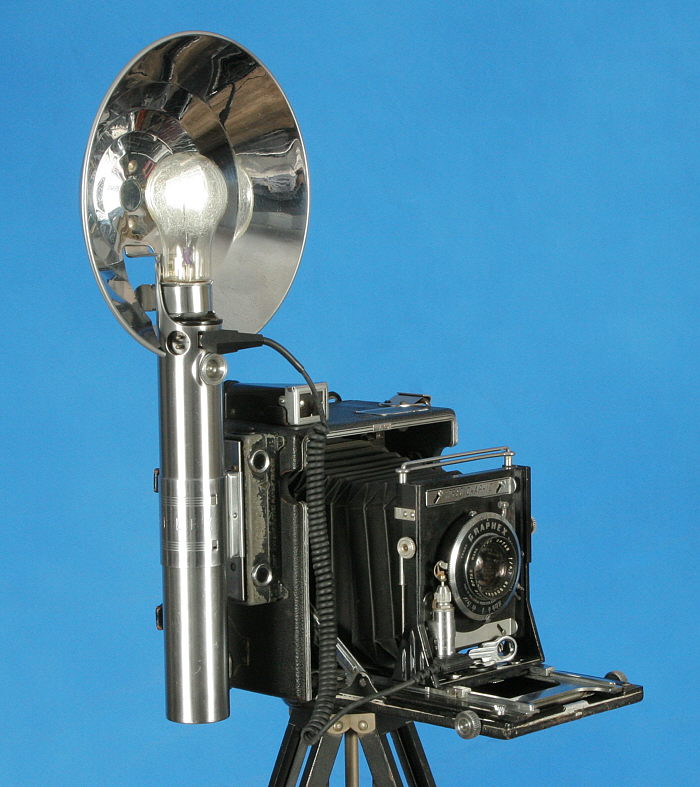 A major redesign of the Speed Graphic was introduced in 1940, and was dubbed the “Anniversary” series in honor of the 50th anniversary of the original entity’s incorporation.

This specimen has the chrome and nickel trim that was absent during most of the World War II era.

The hallmark of the Speed Graphic series, found on this specimen, is its multi-slot single-curtain focal plane shutter. This allowed the photographer to use a stable of lenses not having their own shutters, a cost-saving feature especially during the early part of the 20th century. The focal plane shutter also afforded exposure times as short as 1/1000 second, not practically available on lens shutters until the last third of the 20th century.

It was in fact this feature that accounted for the word “Speed” in the camera’s name. The term was misleading, though, as the camera was really not suited for the photography of fast-moving objects unless the photographer was interested in the artistic effect of “leaning into the wind” skew distortion (caused by the relatively slow travel of the exposing slit across the height of the image) that later became the illustrator’s convention for the motion of vehicles.

The focal plane shutter offers 24 speeds from 1/10 second to 1/1000 second. A table showing the settings of the two adjustments of the shutter for the various speeds is on an engraved plate on the top of the case.

The shutter is complex to operate and its proper manipulation was only learned through long practice.

The camera has a telescope-like eyepiece viewfinder with parallax adjustment.

The camera also includes a “sports” viewfinder, comprising a peep-sight at the camera back and a rectangular viewing frame mounted on the lens standard. By using this finder, the photographer can see the field of view of the camera within the context of the larger scene, facilitating “acquiring” the moving football or whatever. The peep sight can be folded down and the frame collapsed into the front standard when the sports finder is not being used.

The camera is equipped with a side-mounted Kalart split image coupled rangefinder, linked to the focusing mechanism. 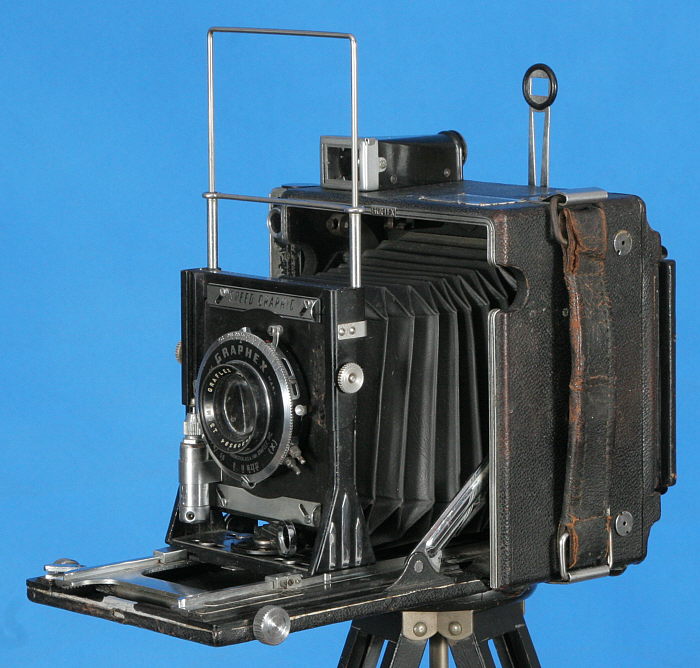 This camera is equipped with a Graflex Optar 135 mm f/4.7 lens in an X synchronization Graphex shutter, both made for Graflex by Wollensak. The lens shutter offers speeds of 1 to 1/400 second, as well as Time and Bulb modes for long exposures. It provides only “X-sync” (zero delay) flash synchronization, suitable for electronic flash units and for F-class (fast peak) flash lamps if a modest shutter speed is used. The camera is equipped with a lens trip solenoid. 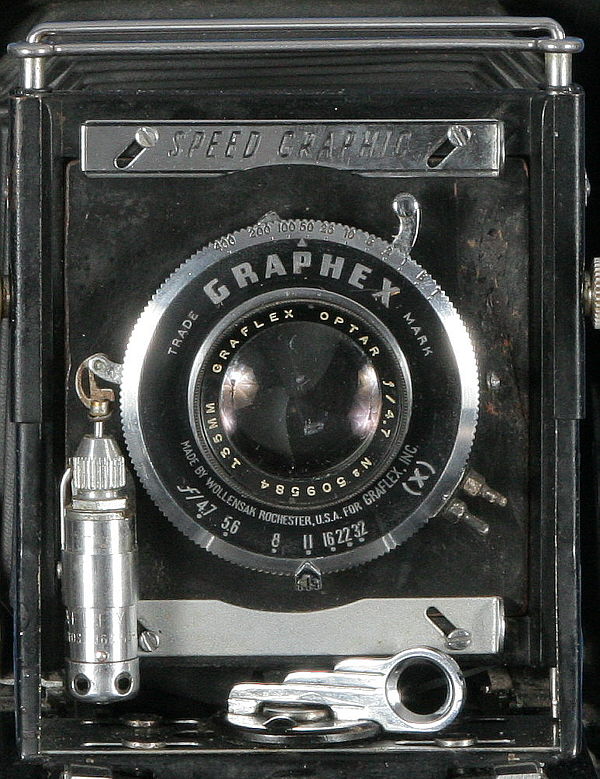 The camera offers a very limited set of “movements” for image control: front (lens) rise (but not fall) and shift (side to side).

Focusing is done with a helical gear that moves the focusing track, with a knob on each side. The track is equipped with a distance scale having a vernier arrangement for ease of reading closely-adjacent distances. The scale (specific to this lens) runs from 6' to infinity.

The camera is exhibited with a Graflex Type 37 Flash Synchronizer (“flash gun”), with a 3-cell battery case and a 7” reflector. It accommodates medium base flashlamps, such as the no. 11, no. 22, or Press 40. This flash unit includes a spotlight to illuminate the subject for focusing in nighttime conditions. This unit is contemporaneous with the camera.

This is the earlier Graflex flashlamp flash unit (called just "Graflex"); the later series was called the Graflex Graflite series. Units like this one are today hard to come by, and the market price is quite high, for an unusual reason. In the first Star Wars movie, the properties department made the "light sabers" based on the handle of a Graflex Type 37, which were at the time readily available at low cost in the numerous used camera stores in the Los Angeles area.

The result of this is that Star Wars aficionados still bid vigorously on units of this type that come on the market so as to make replicas of the original light sabers. (There are even Asian firms that make dummy replacements for hard-to-find components of these units.)

Three cords are included for use in connection with the flash unit:

• A special cord that goes into the focusing spotlight (in place of the lampholder/lens assembly) that connects to a Kalart Focsupot (not included in this item). This lamp assembly attached to a port in the top of the Kalart Rangefinder, and used its optics to project a beam of light onto the subject, allowing rangefinder focusing in a dark environment. This is a period cord, and is quite rare.

The camera back is of the “Graphic” type (often called a “spring” back). It takes a standard Graphic style DDS (double dark slide) film holder, which is reversible and can carry two 3¼”×4¼” sheets of film.

The back has a trap door over the groundglass. When it opens, there are cloth wings on both sides to provide a hood (Their outer edges have become detached in this specimen.)

The camera overall is in good mechanical condition (except as noted below) and moderately good cosmetic condition.

The bellows is supple and sound, and does not appear to have any light leaks. I cannot guarantee the complete absence of pinholes; I have never shot the camera.

The lens shows a few internal anomalies in the glass, and there is a "scuff" on the front surface.

On the lens shutter, the aperture ring turns very stiffly. The shutter is very sluggish, and really doesn't fully operate at the slower speeds. It acts as if the main spring and other organs are intact.

The focal plane shutter has an intact curtain and is operative, although a bit sluggishly.

The flash unit is in very good mechanical and cosmetic condition.

The tripod seen in the pictures is not included in the package offered for sale.

This set represents an important phase of the Graflex continuum. In its present condition, it makes a lovely exhibit. It could be readily restored to shooting condition.