In an interchangeable lens camera system, the term flange focal distance (often also called the back flange distance, register distance, and several other terms) refers to the distance between the reference contact surface of the mount and the focal plane (where the sensor resides).

In the Canon EOS R system, that distance is 20 mm, significantly less than in the familiar EOS (EF) mount, where it is 44 mm. This is of course made possible by the fact that in the non-SLR formulation of the EOS R there is no mirror between the lens and the sensor. Thus, we can allow the mechanical aft end of the lens to reside closer to the sensor, and a closer mount is an obvious corollary.

One obvious advantage of this is that, "all other things being equal", it allows for the body to be made thinner, perhaps by 24 mm (almost an inch) or so.


It is worthwhile noting here, so as perhaps to avoid anybody later barking up a wrong tree, that the throat diameter of the new mount is identical to that of the EF mount.​
The Canon white paper on the EOS R system discusses at some length other advantages of this change in flange focal distance with respect to lens design. The description nicely avoids mathematics or discussion of actual optical theory principles, and while it sounds facile, I have not yet been had time to wrap my engineer's head around it. Nevertheless, I will tell the story essentially as it is presented in the white paper.

The author points out that the various schemes used in lens designs to minimize certain aberrations can be made "easier" if we:

• Move the last element of the lens closer to the sensor, but this would result in some of the rays traveling toward the outermost parts of the frame striking the sensor at a more oblique angle, which is not desirable. So to overcome that, we

• Make the last element larger. Then, many of the rays destined for the outermost parts of the frame come thorough places in the outer regions of the lens, and thus striking the sensor at a less oblique angle.

But does this mean that the lens is now heavier and more costly because of the increase in size of the last element? Evidently not, since (according to the example sketches in the white paper) we can now make the first element smaller (simplistically, having turned the original lens recipe around).

Interestingly enough, as this story is told (second- or third hand) in some comments about the new camera system, "The smaller flange focal distance allows us to make the last element of the lens larger, which is advantageous."

As well as I now understand all this (not too well, I'm afraid), that is sort of backward. We are now able to make the last element closer to the lens, but to benefit from that we need to make it larger.

Over the next day or so I'll try and do some bush-league ray tracing which will then (hopefully) prepare me to construct a more fluent explanation of this matter.

On a different camera, with a fixed lens, the last element is already quite close to the sensor:

And this is the non-removable lens of another camera removed, the last element can be seen: 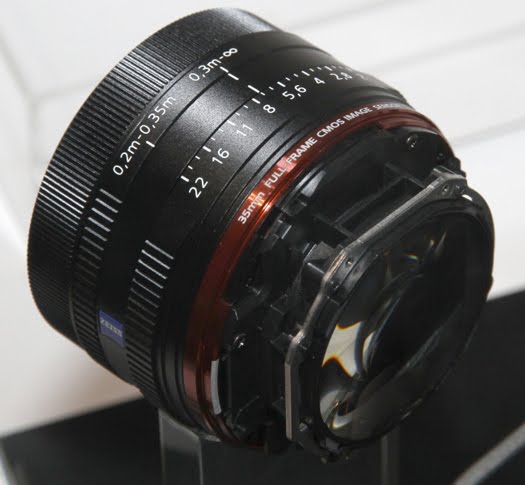 Doug Kerr said:
It is worthwhile noting here, so as perhaps to avoid anybody later barking up a wrong tree, that the throat diameter of the new mount is identical to that of the EF mount.​
Click to expand...

One must remember to take into account that the lens mounting flange is now 1” close to the sensor. So for optical drawings, the, (apparently), unchanged size opening in the body, being close to the sensor plane will increase the ability of more oblique light getting into the camera.

Another way of putting it is that the “penumbra” effect of the edges of the opening in the front of the camera is reduced substantially.

This, BTW, makes this camera a much better camera body that the classical Eos cameras for stitching with shift back adapters on Large Format Camera’s, as there will be less vignetting at the most extreme shifts. Put it another way, this new camera seems ideal as a back for LF cameras with a universal 4x5 shift adapter.


Jerome Marot said:
On a different camera, with a fixed lens, the last element is already quite close to the sensor
Click to expand...


Asher Kelman said:
One must remember to take into account that the lens mounting flange is now 1” close to the sensor. So for optical drawings, the, (apparently), unchanged size opening in the body, being close to the sensor plane will increase the ability of more oblique light getting into the camera.

Another way of putting it is that the “penumbra” effect of the edges of the opening in the front of the camera is reduced substantially
Click to expand...

That notion would apply if the operation of interest were to lay the camera body, with no lens aboard, on its back on a table outdoors, facing the open sky, and our interest were in uniformity of illumination of the sensor.

But in actual camera operation, there is of course a lens mounted. Typically the last element is about at the plane of the mount. Thus "shadowing" by the area surrounding the mount opening is not, per se, an issue.

I wish I were yet prepared to give an applicable homily to help understand the advantage of a smaller back focus (distance from the vertex of the rearmost lens element to the sensor), the actual parameter of interest here*, but I'm not.


* If we have no reflex viewing mirror, then, we could still ,with the mount in the same place as an EF mount, have a smaller back focus than in an EF lens if we wish, by merely having the tail of the lens protrude trough the mount toward the sensor. But that would of course be mechanically silly, so once we have no mirror, and would (evidently) like to be able to design with a small back focus, we might as well have the mount itself closer to the sensor. Then the body could be thinner (and thus, I hear, "less professional").​
Best regards,

One issue that suggest a small back focus distance (and indirectly, a small flange focal distance), not the one spoken of (directly) in the Canon white paper, is this.

First consider the fanciful "thin lens" we often use to sneak up on optical design concepts. There, the focal length is identical to the back focus distance (the distance from the rearmost point of the rearmost element of the lens; for a "thin lens", just the distance "from the lens"). And in fact, for more complex, "compound", lens designs, of the most straightforward type, a small focal length generally still calls for a small back focus distance.

In a single lens reflex camera, because of the need to have lebensraum for the reflex mirror, we cannot have the last lens element as close to the sensor as the small focal length we want for some lenses. Thus the retrofocus design principle is employed, which allows the lens to have a back focus distance greater than its focal length. But such a design is complicated (more so the greater the discrepancy between the back focus distance and the focal length), and I presume that meeting targets for various aberrations is more difficult in the face of the mandate for retrofocus design.

If, for example by foregoing the use of a reflex viewing mirror, we can place the rearmost lens element near to the sensor (that is, have a small back focus distance), then we may (for some desirable small focal lengths) be able to eschew the retrofocus design principle altogether, or at least employ it in a "more modest way".

• By eliminating the reflex mirror, we can put the last lens element closer to the sensor.

• This allows a simpler design for small focal length lenses.

• Having done that, there are various mechanical design advantages (in the body and the lenses) to moving the mount closer to the sensor.