In 1923, Eastman Kodak introduced 16 mm motion picture film and a camera to use it, the Ciné-Kodak. This, in the US, first made practical what came to be known as "home movies". The Ciné-Kodak was followed by a long line of motion picture cameras (the original Ciné-Kodak became known as the "Ciné-Kodak Model A" after the emergence of the next camera in the line, the Ciné-Kodak Model B). The 16 mm camera line was later joined by 8 mm cameras, and then there came into being cameras using pre-loaded film magazines, eventually both in 16 mm and 8 mm formats.

In 2018, through a curious "accident", I became interested in the Ciné-Kodak line, and began to acquire specimens. Eventually,we had one of almost every model (one notable exception being the Ciné-Kodak Model A - specimens of that are just too rare and costly).

Also missed by our dragnet was the Ciné-Kodak Model E, which I didn't consider "very interesting". But just recently I had the opportunity to acquire a Model E in (mostly) very good condition, and it is now on the display shelf with the rest of the line.

Douglas A. Kerr: Kodak Ciné-Kodak Model E camera​
This specimen is the variant that had interchangeable lenses, usually supplied with a focusing 25 mm f/1.9 lens. It can accommodate 100 foot film spools.

The camera is driven by a spring-wound motor, wound with a large winding key. That key is missing from this specimen. The only practical way to get one is to buy another camera in "for parts only" condition. (And sadly, the camera serial number is on the winding key, so . . ..)

Important predecessor models such as the Model B and Model K, also accommodating 100 foot film spools, had the supply and takeup spools "face to face", leading to a body that was not extremely high. In the model E, the more classical arrangement was used, with the two spools in the same plane. But rather than the two spools being one directly above the other, as in many other manufacturers' cameras, here they were diagonally disposed, leading to the unique case shape we see. This was described as being intended to allow a photographer wearing a brimmed hat (who would go on a backyard shoot without one) to put his eye to the eyelevel viewfinder eyepiece lens without interference between his hat brim and the camera.

We see the interior of the camera here, with the loading door removed: 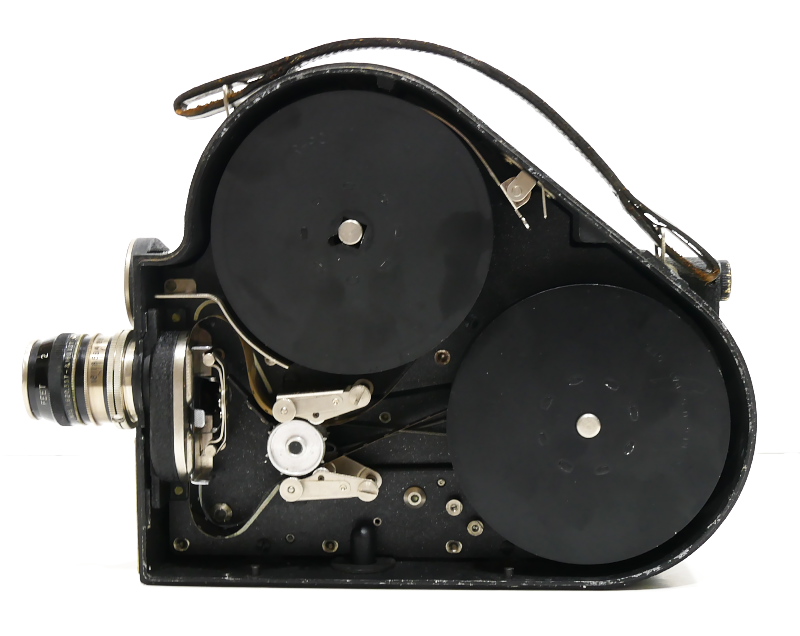 One might wonder why Kodak would put the serial number of this camera on the winding key.

Kodak wanted the numbers to closely follow the sequence of manufacture (that is, of final assembly) of their cameras. But if they wanted to put the serial number on, say, the back plate of the film chamber, that wouild be most easily done before that plate had been filled with mechanisms. And since often a partial assembly was made in a batch that might go into cameras made over a period of months or even years, that wouldn't work out.

So they most often put the serial number on some isolated small part, put on the camera at the very end of assembly. Then they could number these in small batches and put them on the cameras in the order in which they were completed.

Sometimes that was one of the brackets to which the carrying handle was attached, but then again, maybe the whole body, including that, was made in a large batch (the bracket being riveted on the case before the innards were inserted).

So the winding key, easily put on last (it just "screwed in") became a common part on which to place the serial number.

Oddly, even among fairly avid collectors of these cameras, that is infrequently known.

Are the keys unique? I could copy one for you if that would be helpful?


Asher Kelman said:
Are the keys unique? I could copy one for you if that would be helpful?
Click to expand...

Well, its design is only used on this model, and I don't have a sample of one. But I could perhaps borrow one from another well known collector I stay in touch with. 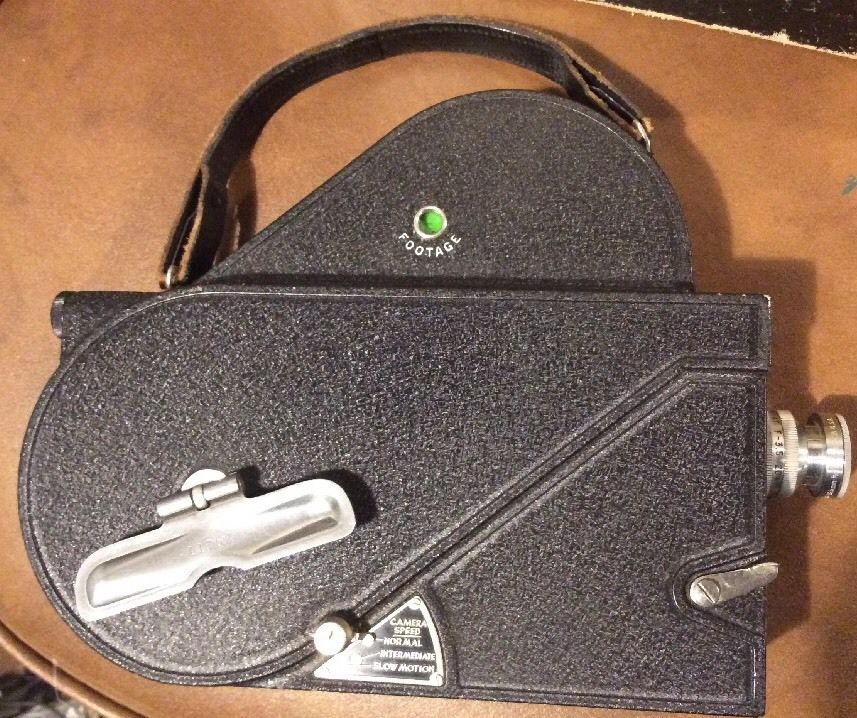 ​
The "hub" has a threaded stud on it that screws into internal threads on a "hub" on the camera mechanism.

Incidentally, the point of having one is not to make the camera "runnable". It has another probably debilitating fault, and disassembly to fix that is very difficult.

I forgot to mention it in my original message, but this model was introduced in 1937, and it is likely that this specimen was made in 1940 or 1941.

Doug Kerr said:
I forgot to mention it in my original message, but this model was introduced in 1937, and it is likely that this specimen was made in 1940 or 1941.