It seemed as if we should have a nice external flash for our new Panasonic DMC-FZ1000. The "genuine" Panasonic flashes are, except for the smallest one, which is really feeble (in the broader meaning of the word), fairly large and greatly expensive.

My attention was somehow brought to the Nissn Di466. I saw that it comes in three flavors:

But of course my interest was not for use with a Panasonic Four Thirds camera but rather with the FZ1000. But, as it turns out, this model is seemingly fully-compatible with that, and with its littler brother (which we also have), the FZ200.

So we bought a Nissin Di466FT, USD 140.00 through an Amazon-associated camera dealer. Interestingly enough, B&H does not at present list the "Four Thirds" version of this machine.

It is quite lovely and seems very nicely made. It is a very nice size, well harmonious with the FZ1000. Here we see it in place: 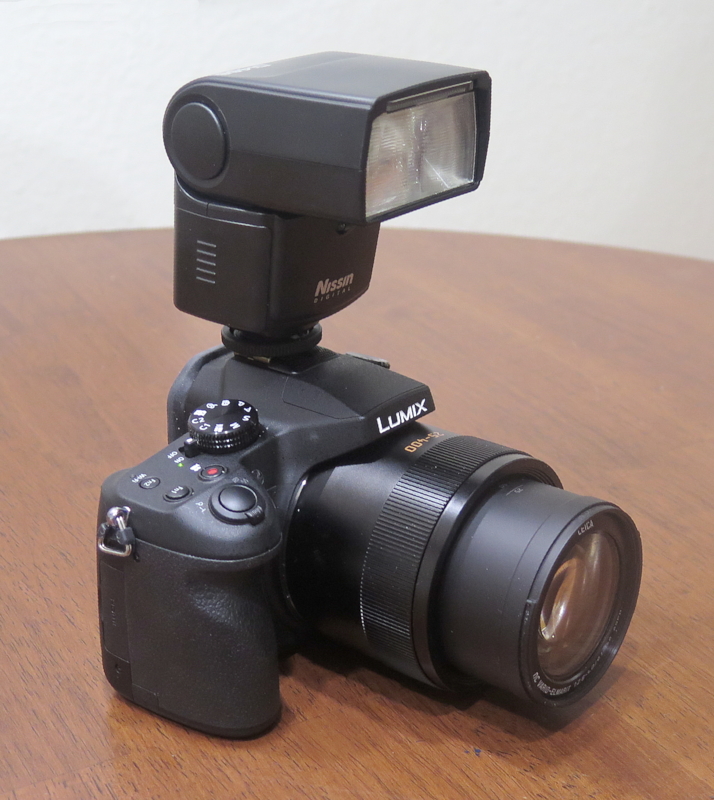 Douglas A. Kerr: Nissin Di466FT flash unit on a Panasonic DMC-FZ1000 camera​
As you can see, it has a tilt head, but no swivel feature (thus making it not directly usable for bounce flash with the camera in portrait orientation. It has an automatic head beamwidth ("zoom") control, with seven positions from 12 to 53 mm focal length on a Four Thirds camera (essentially from 24-106 mm ff35 equivalent).


Note that the beamwidths are fixed, expressed in terms of ff35e focal lengths, regardless of the camera on which used.​
There is a pull-out auxiliary lens to provide for a focal length of 9 mm (on a Four Thirds camera; about 18 mm ff35e). There is also a nice pull-out "highlight card" for use when in the bounce mode. Those two arrangements are essentially identical to what we find on the Canon flash units.

The unit runs from four AA cells, which are housed in a removable cassette (as in a Vivitar 383, for example).

The unit has provision for applying flash exposure compensation (FEC) from -1.5 to +1.5 stops. This "piles on" to any FEC set on the camera.

The unit can also be used in a manual exposure mode, with settings down to 1/32 of full power.

We see its controls here: 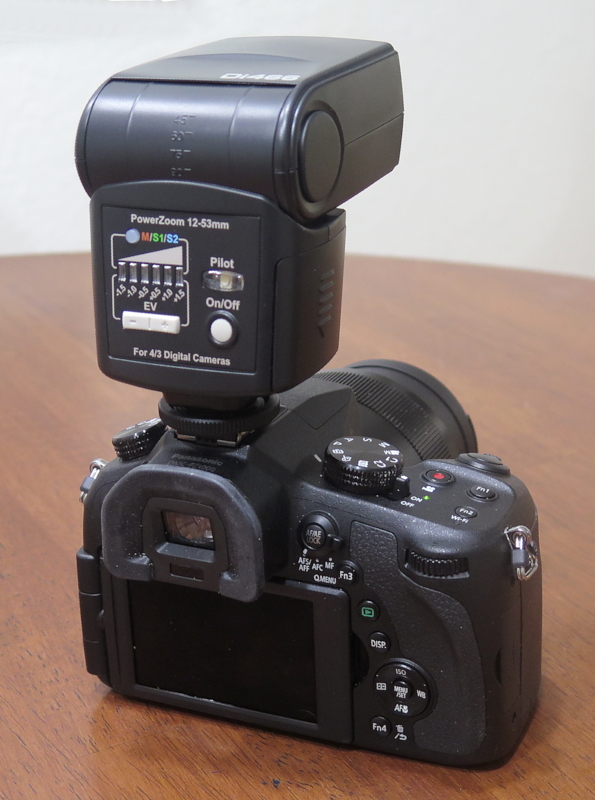 Douglas A. Kerr: Nissin Di466FT flash unit on a Panasonic DMC-FZ1000 camera - rear view​
The maximum rated guide number, on an ISO 100 basis, is 18 m at the widest beamwidth (not including that attained with the auxiliary lens) and 32 m at the narrowest.

The units can be used in an optical slave receiving mode, with optional provisions to ignore a (single) metering preflash. Operation in that mode is on a manual output setting basis. It comes with a set of "penguin feet" for standing it up on a table in that service; there is a tripod fitting on the bottom of the penguin feet.

We have not yet had much chance to shoot with this new machine, but hope to have some samples to show soon.