I post this in this forum section as it is, at this writing, one of the few that allows the attachment of image files.

"Steampunk" (in one usage) refers to a genre of clothing and accessories that evokes, usually in a "fantastic" (and often "corny") way, the technology of an earlier era (the allusion being to the era in which machinery was "steam-powered").

One of Carla's gifts to me this past Christmas was a striking wristwatch that really doesn't fit that definition of "steampunk", but which I think of as "modern steampunk". We see it here: 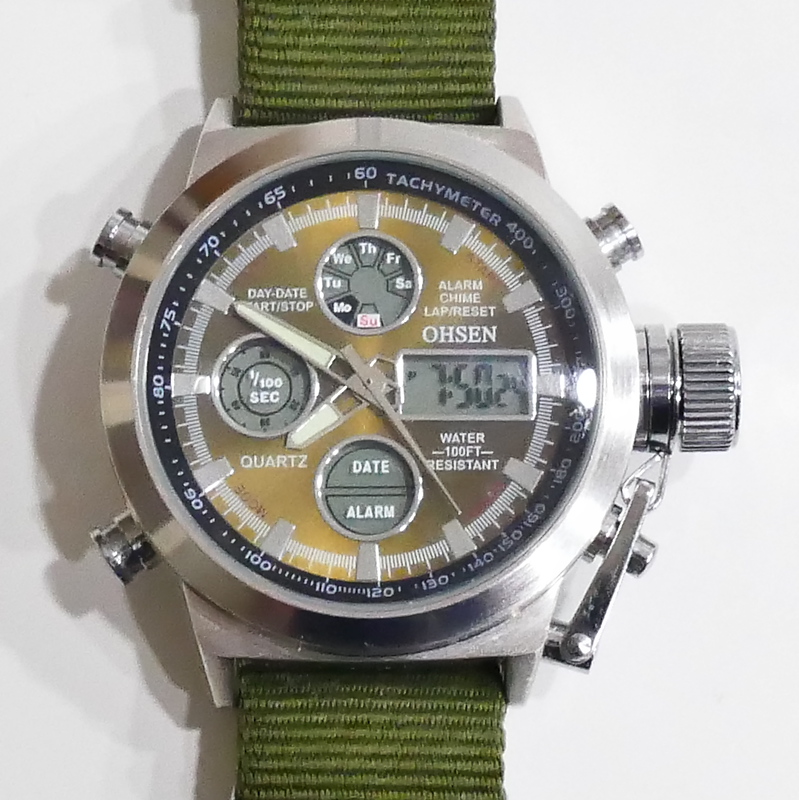 Douglas A. Kerr: Ohsen AD1615 watch - modern steampunk​
It is an Ohsen AD1615 analog/digital watch, made by the Guangzhou Ohsen Watch Co., Ltd., Guangzhou, China. The analog aspect is rather conventional, with the usual hour, minute, and center seconds hands. The digital aspect includes a normal digital time display, a digital stopwatch (with single memory lap/split capability), and a digitally-set alarm. These all operate via a very small digital display panel located at about 3 o'clock on the analog dial. It is so small (and so easily obscured by the analog hands) as to make these capabilities essentially useless.

On the right is an odd apparatus, a rather large screw-on cap that covers the setting crown, with a lever tether to keep it from getting away when it is removed. The ostensible function of this cap is to waterproof the crown (it has a gasket in it). (Of course, a gland on the crown stem would have done the same thing much more compactly.) In reality, this is just an excuse to have an interesting collection of parts to make the watch look "unusual". And this is what justifies my calling it "modern steampunk". It’s a great watch to wear when one wants to seem “stylish but eccentric”, without going so far as to wear a classical steampunk watch. C'est moi.

Am in process of providing a uniform and rich experience!

I know it is very tedious. But we do "the necessary".

Thanks so much for continuing to perfect our new home.