Carla's adventure in the Black Hills

Carla is a member (in fact is the founding and current queen) of the New Mexico Roadrunner Chapter of The Red Hat Society, which as you may know is a social order for "mature" women. It is headquartered here in Alamogordo, N.M.

But she also belongs to a chapter known as Miss Kitty's Social club, which is a floating chapter, without a fixed geographic base. It has members from all over the U.S. (and a few from outside), and has one adventure each year, in locations all across the U.S. (mostly so far in the western states).

This year's adventure was in the Black Hills region of western South Dakota. It was only a long weekend in length, but included many wondrous events, including:

a. A visit to the Mount Rushmore National Memorial, where the girls got to see the stirring lowering of the U.S. flag at dusk.

b. A visit to the site of the Crazy Horse Memorial, where a colossal statue depicting the famed Oglala Lakota warrior, Crazy Horse, perhaps best known for his victory in the infamous Battle of the Little Bighorn, is under construction.

c. A ride on an antique steam train, drawn by a unique locomotive.

d. The girls donning period costumes (two different kinds) and stunning the civilian patrons of a restaurant and a saloon.

I'll cover (a), (b), and (c) in some detail in later messages in this thread. But I'll open with a shot of Carla at the entryway to the Mount Rushmore National Memorial: 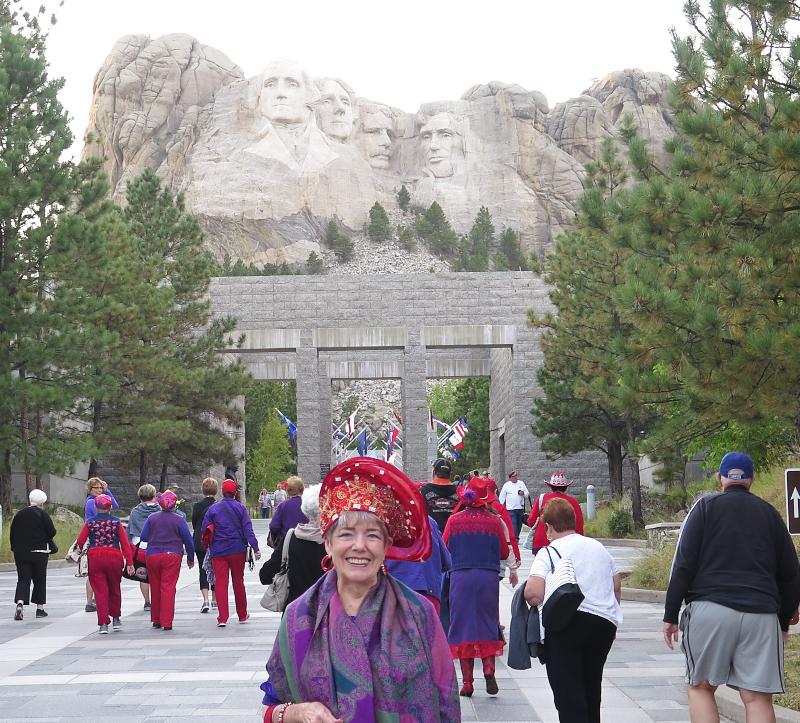 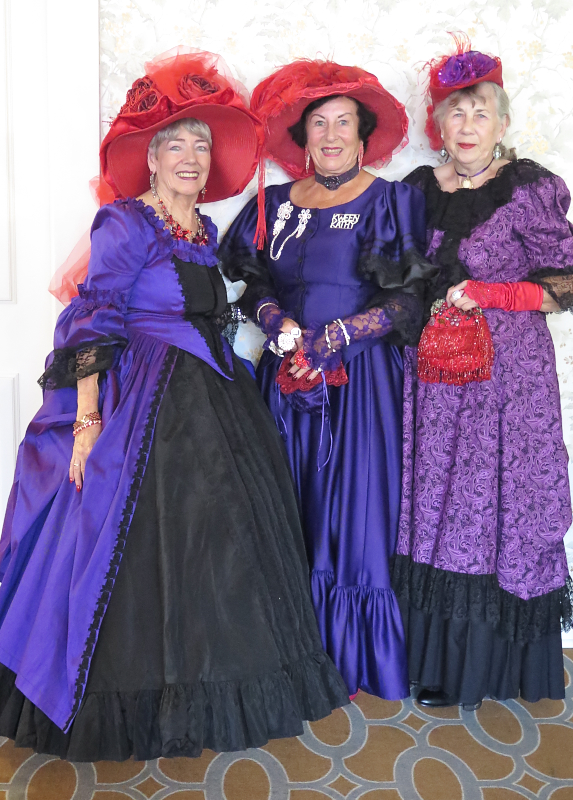 Carla and two of her friends, Kathy and Myrna (from Maui, Hawai'i) in their period costumes

Mount Rushmore National Memorial is a sculpture of the heads of four U.S. presidents, George Washington, Thomas Jefferson, Theodore Roosevelt, and Abraham Lincoln, carved into the granite face of Mount Rushmore near Keystone, South Dakota, U.S.A. The faces of the subjects are approximately 60 feet high.

It was originally planned that the four subjects be depicted from head to shoulders, and the layout of the sculpture was based on that, but a lack of funds (and the outbreak of World War II) precluded completing the shoulder portions. We do see the "rough in" for Washington accommodating that.

The sculpture was designed and most of the work was overseen by famed sculptor Gutzon Borglum, assisted by his son Lincoln Borglum. The senior Borglum always was fascinated by Abraham Lincoln, and named his son after him. After Borglum's death in early 1941, his son supervised the remaining work.

The work began in 1927. In October of 1941, the work was suspended due to a lack of funds; the outbreak shortly after of World War II then precluded the resumption of work.

Here we see the memorial at late afternoon: 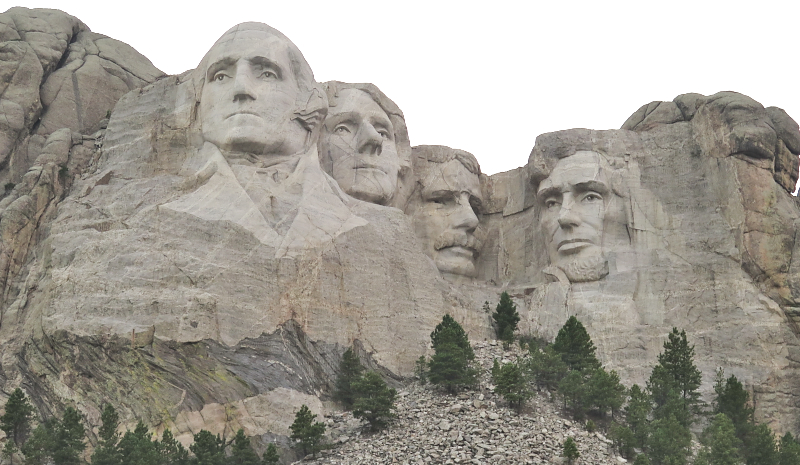 Canon PowerShot G16, ISO 125, f/2.8/ 1/100 s​
We note that the left side of Lincoln's face is unfinished. There are several parts to the story of why that is so. Lincoln's face was not symmetrical, and its left side was mildly "deformed". Borglum, who had done several sculptures of Lincoln before this project, was alert to this, and always wanted to have any sculpture present the right side of the face, but that did not always work out.

In Borglum's 1908 bust of Lincoln (now on display in the rotunda of the U.S. Capitol Building), which might be observed from any direction, Borglum made the left side of the face a bit "vague" and in fact subtly did not portray the left ear at all.

Many ponder whether this was just the way the timing worked out, or whether it was perhaps Lincoln Borglum's way of giving his father the last laugh. In any case, after World War II ended, there was no serious discussion of doing any further work on the sculpture. Indeed, sometimes less is more.

But back to Carla's adventure. Here is a shot taken during the retiring of the American flag at dusk at the Memorial: 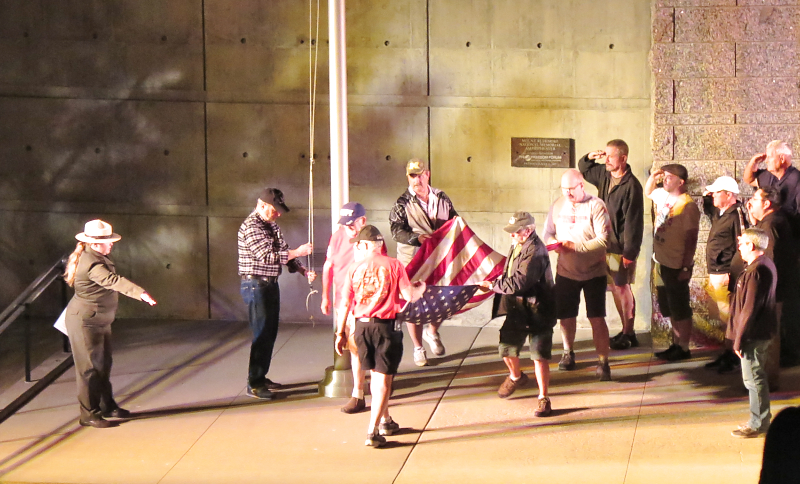 Canon PowerShot G16, ISO 800, f/2.8 1/40 s​
We see a Park Service ranger giving instructions on folding the flag to a number of veterans who participated in the ceremony, none of whom had ever folded the flag in such a context before.

Fascinating post Doug and I love their red hat displays (albeit lacking the signage of other red hats in the news). That second photo should be the cover on a magazine. As they seem to go to similar places I wonder if they ever cross paths with the Rainbow People.

Crazy Horse (born c 1840, named at birth "Among the Trees" ) was a fabled Oglala Lakota warrior, perhaps best remembered for his key role in the defeat of a U.S. Army force under Lt. Col. George Armstrong Custer at Little Bighorn river, Montana Territory, in 1876. He died in September, 1877, while in U.S. Army custody after having surrendered with his people after their band had been weakened almost to the death in a long struggle with the U.S. Army in punishing winter conditions.

In 1939, Henry Standing Bear, an Oglala Lakota chief, and well-known statesman and elder in the American Indian community, recruited and commissioned Polish-American sculptor Korczak Ziolkowski to build the Crazy Horse Memorial in the Black Hills of South Dakota. The sculpture will depict Crazy Horse atop a charging horse, and is being carved out of the granite of Thunderhead Mountain, about 17 miles from Mount Rushmore, South Dakota.

The work began in 1948. There is no estimate of when the work will be completed. The project is conducted by a memorial foundation. No federal or state funding is involved. There have been a number of very generous philanthropic donations over the course of the project to date, but the projected total cost is certainly stupendous.

Crazy Horse's head will be 87 feet high; his eyes are each 17 feet wide. The sculpture's final dimensions are planned to be 641 feet wide and 563 feet (172 m) high. By some reckonings, it is said that when completed it will be the world's largest sculpture. By comparison, the Great Sphinx at Giza is about 240 feet long and 66 feet high. (No, I do not want to defend the comparison nor debate its terms.)

Here we see a small-scale model of the sculpture: 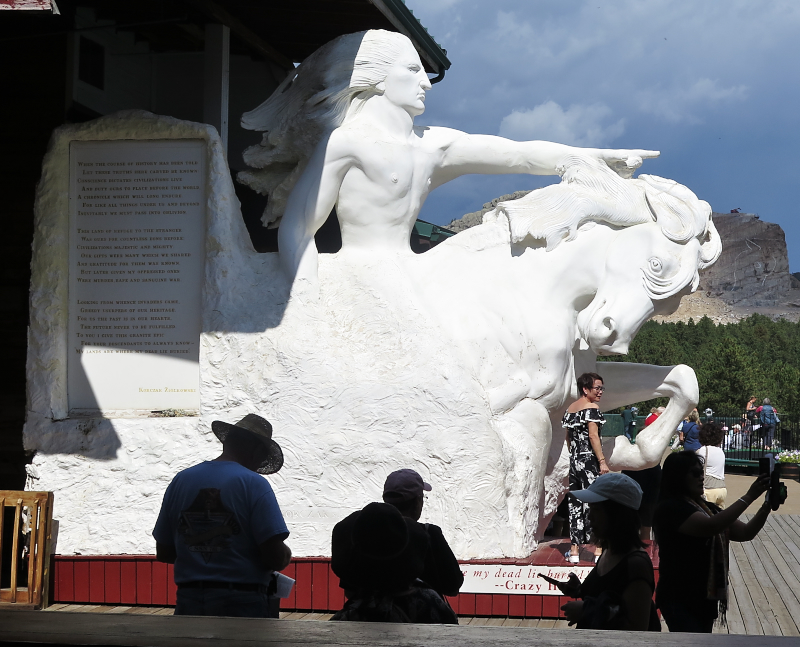 Carla C. Kerr: Model of the Crazy Horse Memorial Sculpture​
Here we see the sculpture as it now exists: 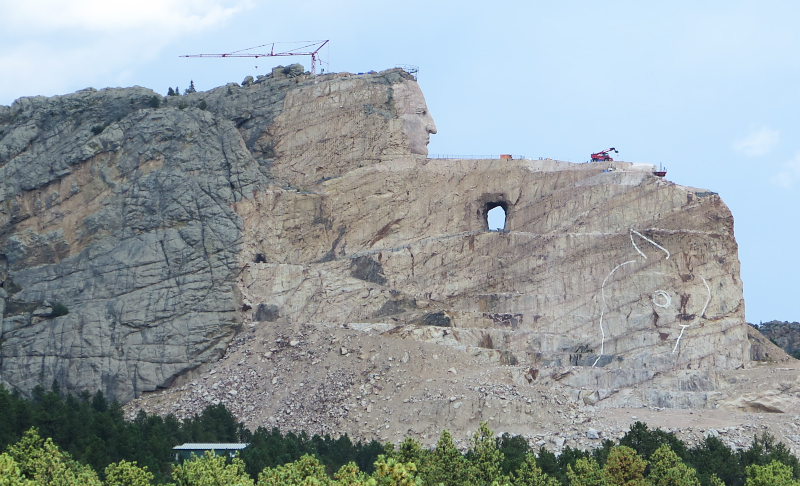 Carla C. Kerr: The Crazy Horse Memorial Sculpture​
We can see a painted outline showing generally where the horse's head will be.

The face was completed and dedicated in 1998.

At the upper right, workers are carving the finger on Crazy Horse's outstretched hand, considered to be one of the most critical parts of the work.

Carla says one cannot imagine how thrilling it is to see this work "in person".


Peter Dexter said:
Fascinating post Doug and I love their red hat displays (albeit lacking the signage of other red hats in the news). That second photo should be the cover on a magazine. As they seem to go to similar places I wonder if they ever cross paths with the Rainbow People.
Click to expand...

Probably quite a contrast in "costume".

The queens would follow her fashion at Ascot if she saw her!

The queens would follow her fashion at Ascot if she saw her! 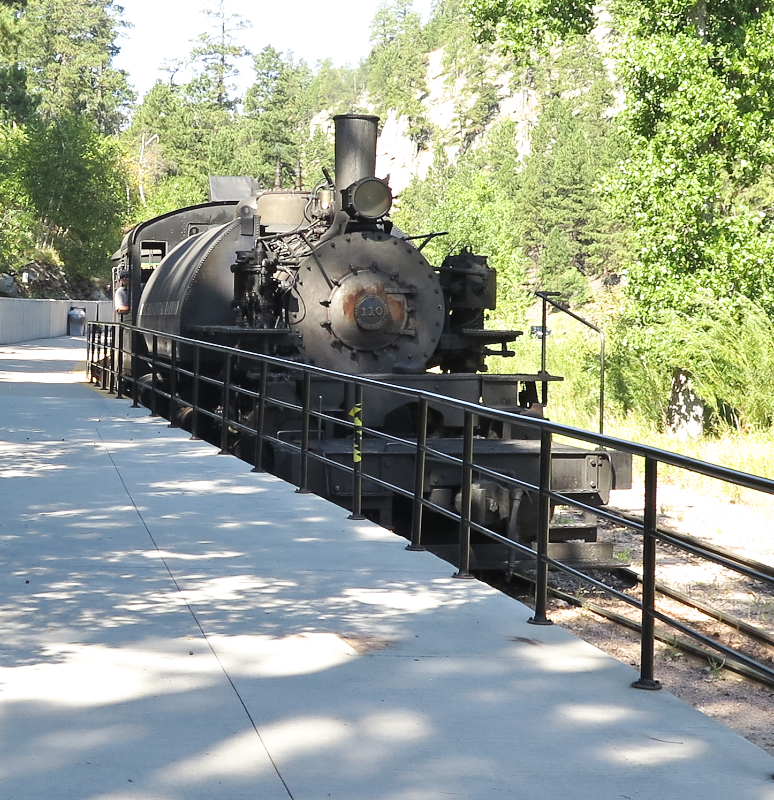 Carla C. Kerr: BHCR no. 110 pulls into the station

And the “110”, that’s for me something sentimental and fabulous!

....and the G10 Canon Camera. Really what more do we generally need, except to fill up massive hard drives in a blink of the eye!

Asher Kelman said:
....and the G10 Canon Camera. Really what more do we generally need, except to fill up massive hard drives in a blink of the eye!
Click to expand...

Indeed. And the G16 has a wonderful lens.


Peter Dexter said:
Fascinating post Doug and I love their red hat displays (albeit lacking the signage of other red hats in the news).
Click to expand...

I actually have two red baseball caps, both with messages. One says, "I love my Red Hatter" and the other says "America is already great". But I never wear baseball caps.

Still, it's a little less great than when Carla got me the latter cap (late in 2016).

Carla always wears a hat when she goes out, not necessarily a red one (if she's not on a Red Hat event). She always gets so many nice comments.

But lately she has often been wearing the red one seen in the first shot of this thread, and it seems to be a special "hit".


Indeed. And the G16 has a wonderful lens.

Further pictures of the Red Hat adventure in South Dakota, most shot with people's telephones, stream in from various organs of the Internet.

This one of Carla needed a little editing (she was disappointed to have sported a napkin when the shot was taken), but I really like it; we're not sure just now who took it: 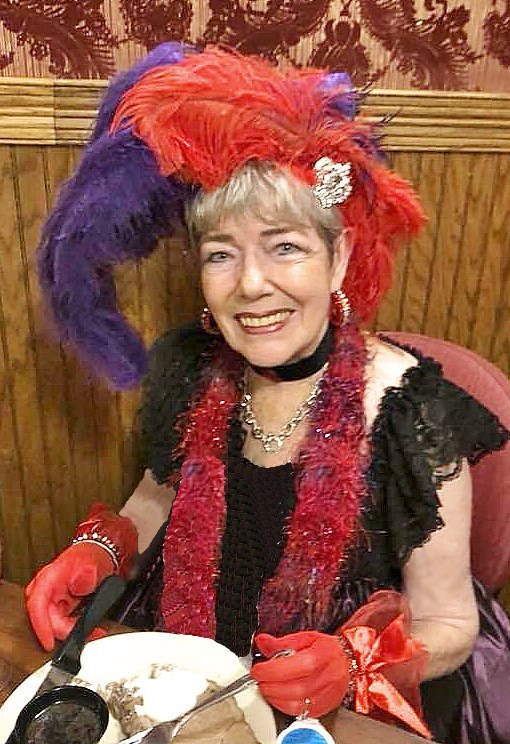 What a lovely lady the President !
And what a nice set of images, Doug !...


Antonio Correia said:
What a lovely lady the President !
Click to expand...

She is indeed, in ever so many ways.

Thank you so much.