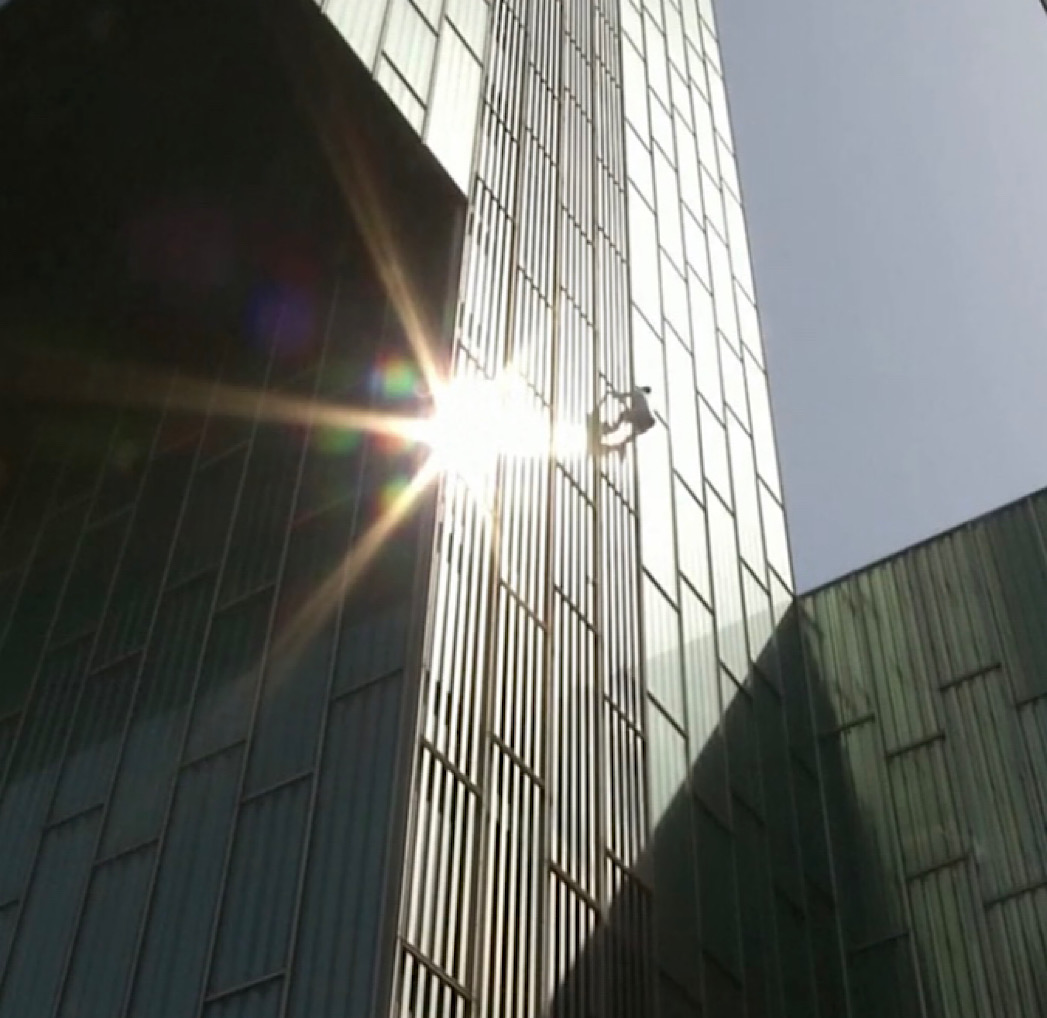 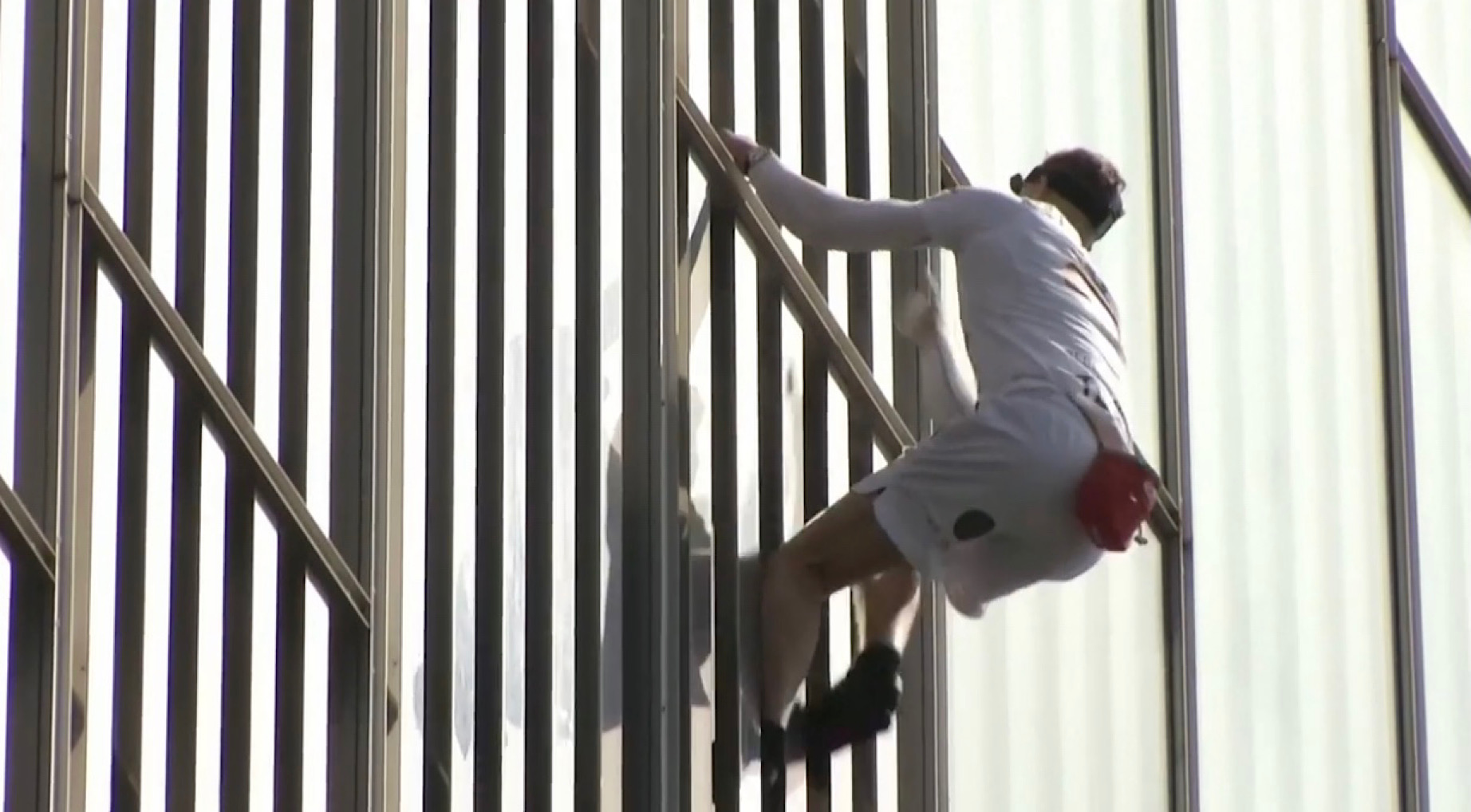 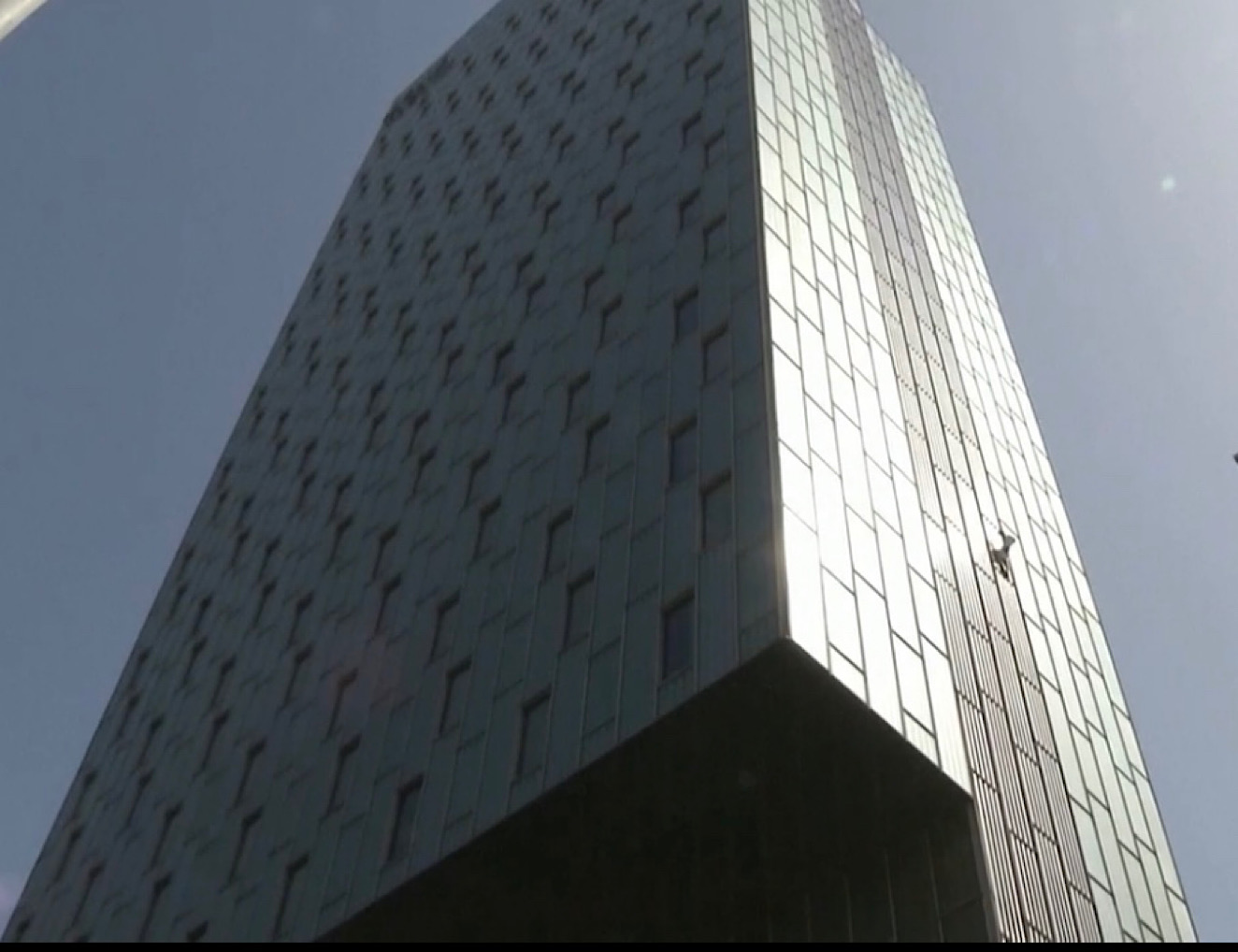 I would love to see the force diagrams as to how this fellow climbs vertically with no ropes or climbing aids. He makes Spider-Man almost redundant!

View attachment 7328​
I would love to see the force diagrams as to how this fellow climbs vertically with no ropes or climbing aids. He makes Spider-Man almost redundant!

I think this is called free solo. I have a friend who is an avid free climber but does use ropes in case of a fall to catch him.

I was wondering about his technique. When he climbed up the length of one window unit, how come his shoes don’t slide on the aluminum?

Asher Kelman said:
I was wondering about his technique. When he climbed up the length of one window unit, how come his shoes don’t slide on the aluminum?

Not sure but there all kinds of devices that are used .
Climbing cams – or spring-loaded camming devices (SLCDs), to be specific –fit into cracks and gaps in rocks where they’ll grip to provide protection. Cams are particularly useful in trad climbing where a nut or bolt won’t work. With that in mind, cams offer a little more flexibility in the route you can take up a rock face, and they’re commonplace in every outdoor rock climber’s arsenal of tools.
The basic mechanism of a cam is that the harder you pull on it, the farther it spreads apart, thereby gripping the walls of the crack you’ve placed it in. It’s more of an advanced piece of rock climbing equipment, but essential nonetheless.
Another advantage of a cam is that it’s a non-invasive form of climbing protection – it doesn’t damage the rock when in use, like bolting or pitons. Incidentally, this philosophy of conservation and ethical climbing is held by climbing pioneer and Yosemite big wall legend Yvon Chouinard who founded the outdoors clothing company Patagonia, amongst other achievements. 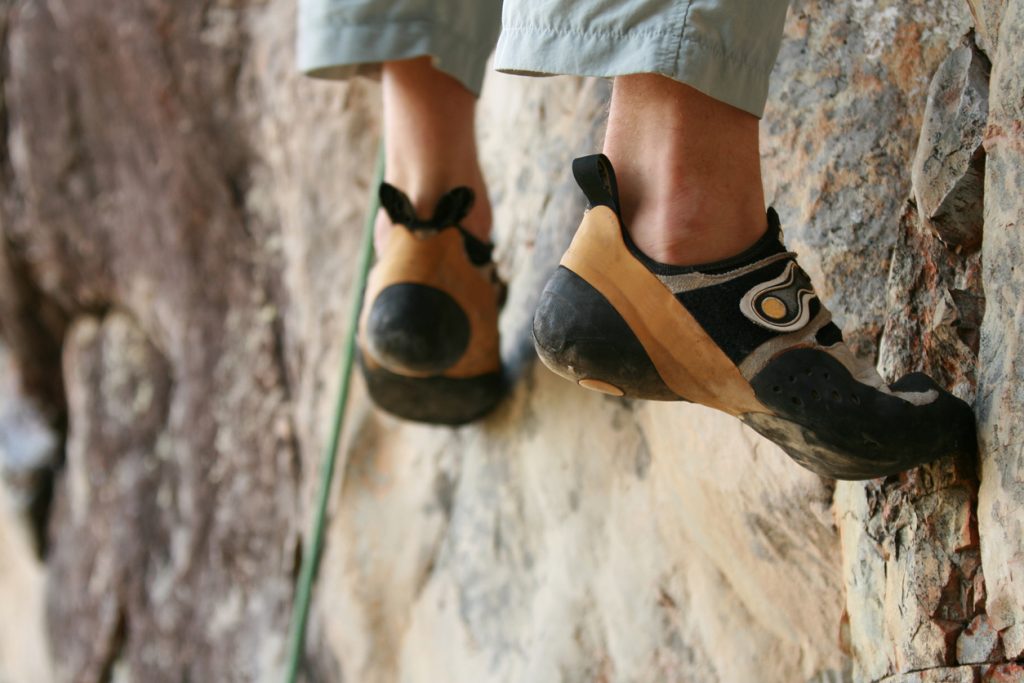 Stepping foot on a wall without climbing shoes is unheard of. They are as closely related to climbing as the racket is to tennis. In short, there is no rock climbing without them.
Climbing shoes are characterised by their tight fit, thin material, and rubber sole and outer edges. These design features all come together to give your foot the best grip on the wall to allow you to stand on holds you otherwise wouldn’t be able to in normal shoes or barefoot.
Buying climbing shoes isn’t simply a case of buying the best shoe on the market, either. For one, it’s mostly about subjective preference, and the ‘best’ shoes are often unwearable for a beginner. For this reason, climbing shoes are most often categorised by skill level, which is closely related to the degree to which the climbing shoe is downturned.
Beginner shoes are relatively flat, with intermediate shoes being slightly arched, and advanced or ‘aggressive’ shoes arched further still. In fact, advanced climbing shoes are so uncomfortable for general use that it’s common to see climbers taking their shoes off as soon as they’re off the wall.
Advanced climbing shoes are purposefully designed for vertical climbing, so the climber is able to transfer power through their foot to make better use of small holds. Achieving this ability takes immense foot strengthening through years of climbing, hence why advanced shoes would be unwearable for a beginner.
When weighing up a pair of climbing shoes, it’s important to try them on and test them out – more than with any other type of shoe. You need to make sure the shoe is suitable for your foot shape.
You should also bear in mind that traditional sizing is most likely redundant when choosing a climbing shoe, as you’ll probably be looking for something at least a size smaller than your usual trainers.
Many bouldering gyms have integrated climbing equipment shops and test holds so that you can both try on the shoe and try it out. If you’re climbing at an advanced level, indoor vs. outdoor use might be worth considering. In most instances, beginner and intermediate shoes are suitable in both environments.
Chalk bag 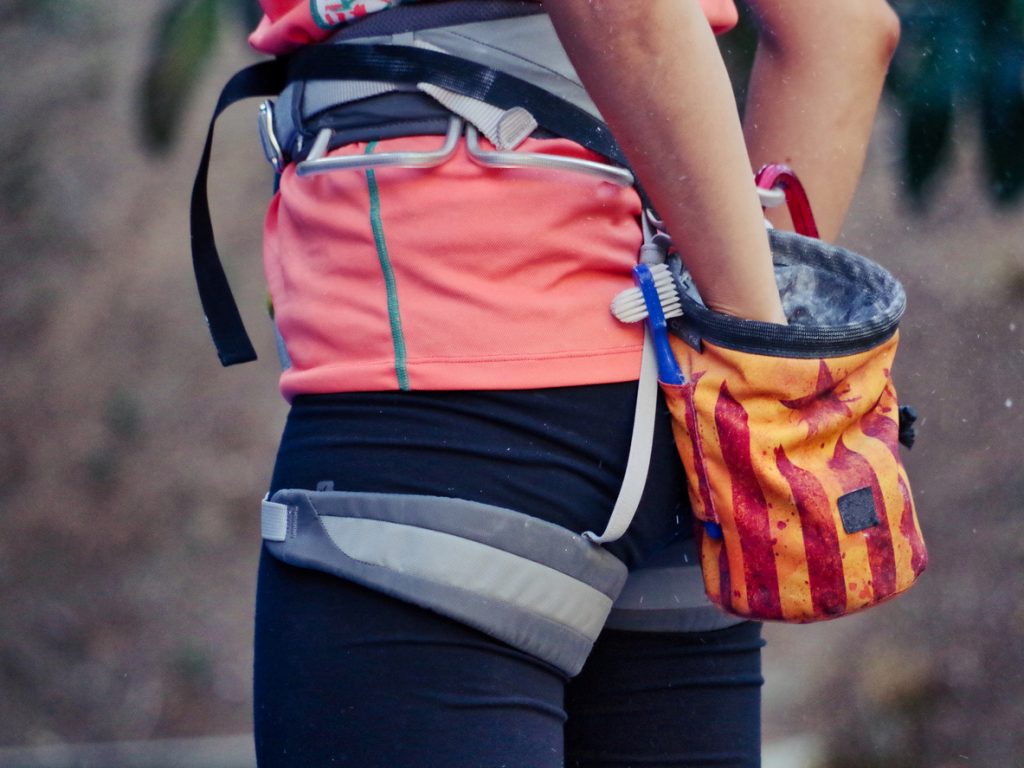 Chalk bags are a pretty straightforward bit of kit. They’re typically a small canvas or synthetic bag designed with an opening to comfortably fit your whole hand, though some are large enough to fit both. They also come with a side-release buckle and a loop of fabric, so you can attach them to your harness or pants.
There are endless options on the market, all roughly as good as each other, given the simple design. Plus, chalk bags are one of the few pieces of rock climbing equipment that allow you to flex a bit of your personality. So, whether it’s a naturalistic Aztec patterned number or a furry monster face, there’s something for everyone.
Just make sure whatever bag you get is wide enough to fit your hand, suitable for the type of chalk you’re using, and tailored to the length of your climb. A cylindrical bag is ideal for longer climbs, whereas a tapered bag is best suited to shorter routes.
Chalk 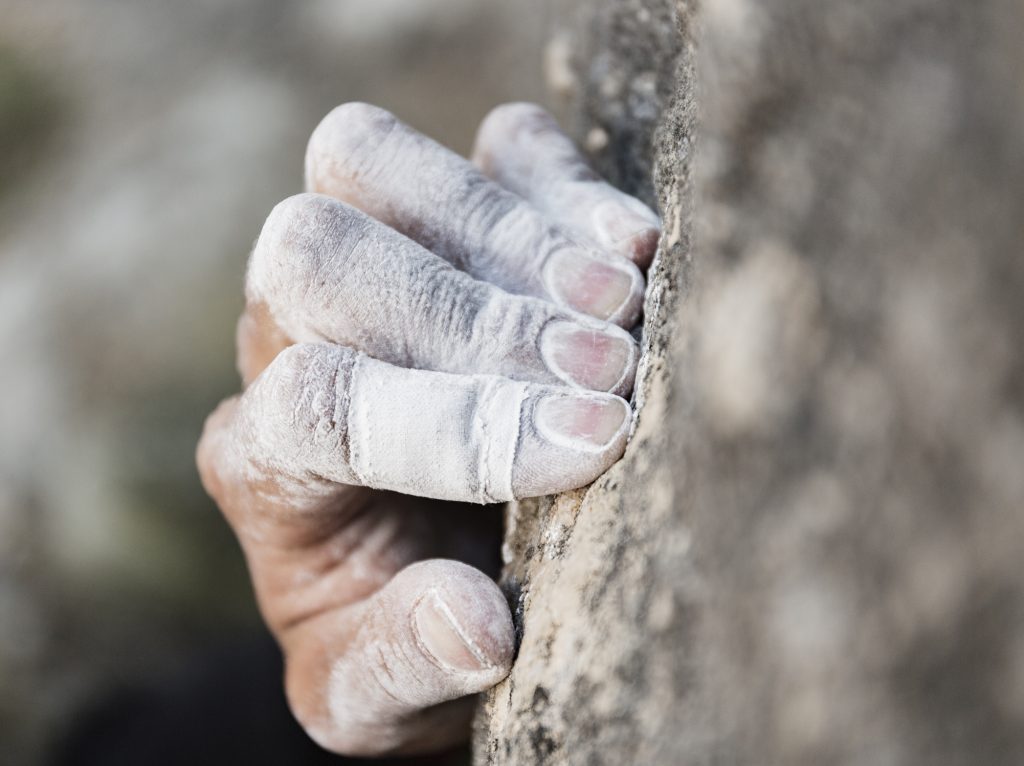 Now you have the chalk bag, you’re going to need some chalk.
As is the case with climbing shoes, it’s unthinkable for rock climbers to climb without chalk. As with the chalk powerlifters and gymnasts use, chalk is used in climbing to increase grip and friction on the surface of your hand by drying sweat and other moisture. It’s not hard to see why increased grip is of vital importance when scaling cliff faces using only your hands and feet.
If you’re starting out, any climbing chalk will do the job. That said, you should look for smaller grained chalk if possible, as it’s sometimes a hassle to break up the clumpier stuff.
You might also want to buy a chalk ball. This is essentially a sealed bag of chalk made of a thin fabric material. Many climbers find them less messy than loose chalk, plus they more economically apply chalk to your hands, which means you’ll cause less chalk build-up on the holds, which other climbers will appreciate.
If you’re really not a fan of chalk or you’re allergic or prone to dry hands, there are alternatives such as liquid chalk you could use instead. However, this might be more suited to bouldering because if you’re halfway up a route, liquid chalk isn’t half as easy to apply as loose chalk.
Climbing tape 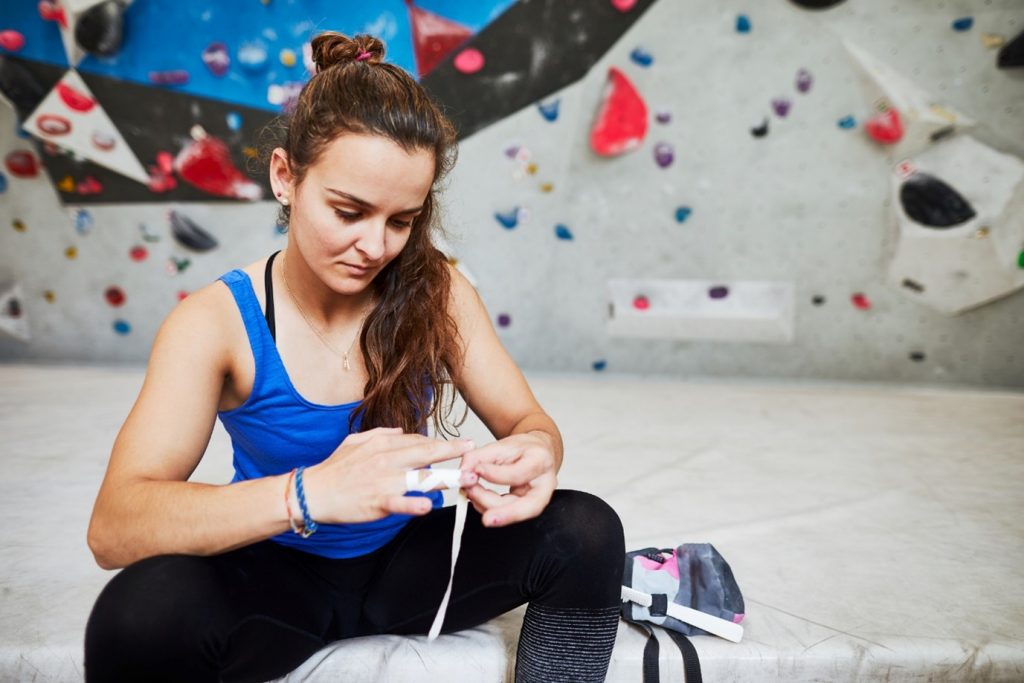 Flappers are the bane of a rock climber’s existence. These are the tears on the pads on your fingers that form when your hands slip off a hold, and they’re so named because of the tiny flap of skin they leave behind. They can also occur as your skin is gradually abraded over a day’s climbing.
That’s why climbers always tend to keep a roll of climbing tape handy. Some apply it pre-emptively, while others only apply it after flappers occur. Many climbing tapes contain zinc-oxide to help heal the abrasions and decrease the chances of infection, too.
Over time, the pads on your fingers and palms should develop callouses, and you won’t be so prone to flappers. But until then, there’s climbing tape.
Flappers aren’t the only use for climbing tape, though; many climbers also tape up their fingers to strengthen them and support the small tendons and muscles within the fingers.

Superb explanations, James! Much appreciated for the time and effort!

What about the challenge of climbing on aluminum with the risk of a layer of grease and slippery dirt or just perfectly smooth polished metal?

Asher Kelman said:
Superb explanations, James! Much appreciated for the time and effort!

What about the challenge of climbing on aluminum with the risk of a layer of grease and slippery dirt or just perfectly smooth polished metal?

Climbing cams come in different sizes very ingenious
Easy to secure and easy to release. What do you think may be in the red pouch that he is toting? 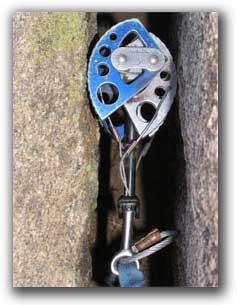 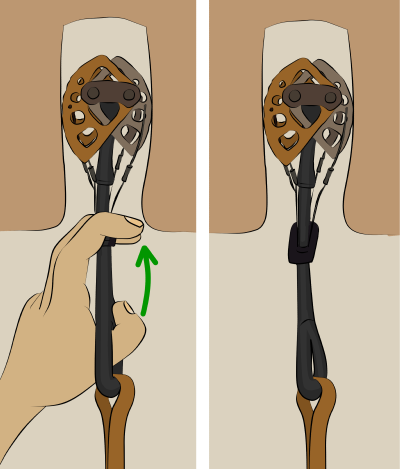 Anyway, how can they beused on flat aluminum and glass?

Besides this guy uses zero tools!