So Although I have some pictures to go with this story, they are from my first few years shooting models and I am not at all happy with them, I suppose if I spent hours in Photoshop I might make them acceptable.
It was back when I was shooting with a Canon D60 (my second digital camera, first DSLR). Many moons ago.
I figure though some of you may appreciate my motto and #1 rule I tell models when I work with them:

So how I came to have that motto...

There I was in Jamaica outside Ocho Rios with a model taking some shore pictures, not really a beach, more rocky than anything else. But the day was lightly overcast and the waves were providing a beautiful backdrop (if only I had learned by that point which direction to shoot in)
Anyway I would watch out for the waves in between shots and warn the model as needed, especially for the big ones.
And one particular wave came through and model was good and so I then put my eye to the camera and a second one had snuck up behind the first while I was focused on the model.
Needles to say she went down with the wave. It was only through the fortune of she was on a small part that was sandy did she avoid any injury. We re-located to safer spot after that.
Shooting at a later date with that same model I was standing in a river and slipped on a rock. Kept the camera out of the water, but I got scrapped up a bit making sure the camera stayed dry. Did find out what happens if you soak a spare memory card that was in my pocket as an added bonus.

These early lessons are why I never mind having a third person on hand to keep lookout for safety.

Trivia: My other rule is:
"If you hear me cursing it is never at the model, always at my equipment" There is a mental tag after that of "Even if it is the model's fault"

I am so glad she wasn’t hurt!

You should dig up the pictures and you would be amazed how today we can make them stellar!

As you distraction, that’s part of my being! So shooting in dangerous places I’ve had similar problems!


1. I am so intensely involved with the artistic details that I totally forget that I am 30 ft up on a ledge. So that natural reflect of deciding to move the tripod a foot to the left....

..... suddenly I was reflexly fighting to throw my weight backwards and not have the unsupported gear pull me over

2. I was photographing on a steep hillside overlooking the Pacific Ocean on Big Sur and my heavy Canon 50mm 1.2L fell of MF my camera..... and leaping forward to catch it, I nearly plunged down the cliff!

3. Last August, in Mexico on the Baja Coast, I was shooting the orange crabs on the giant rocks when a wave smashed me down. I pivoted to cradle and protect my precious Fuji GFX and smashed on to a rib.

It’s badly broken and I am still punished for my foolishness!

The lesson is to not do a photoshoot in a dangerous place without an assistant to be there for safety!

Gear can be replaced! Not so easily bones, ??

Since she is all covered I can show this one although kind of embarrassed by it, I upped the exposure in PS a touch to show her better although it washes out the wave,
but I would have to mask her off and then the rocks separately from the waves to fix this image starting from the raw. Although it does show what kind of waves and the terrain that day. 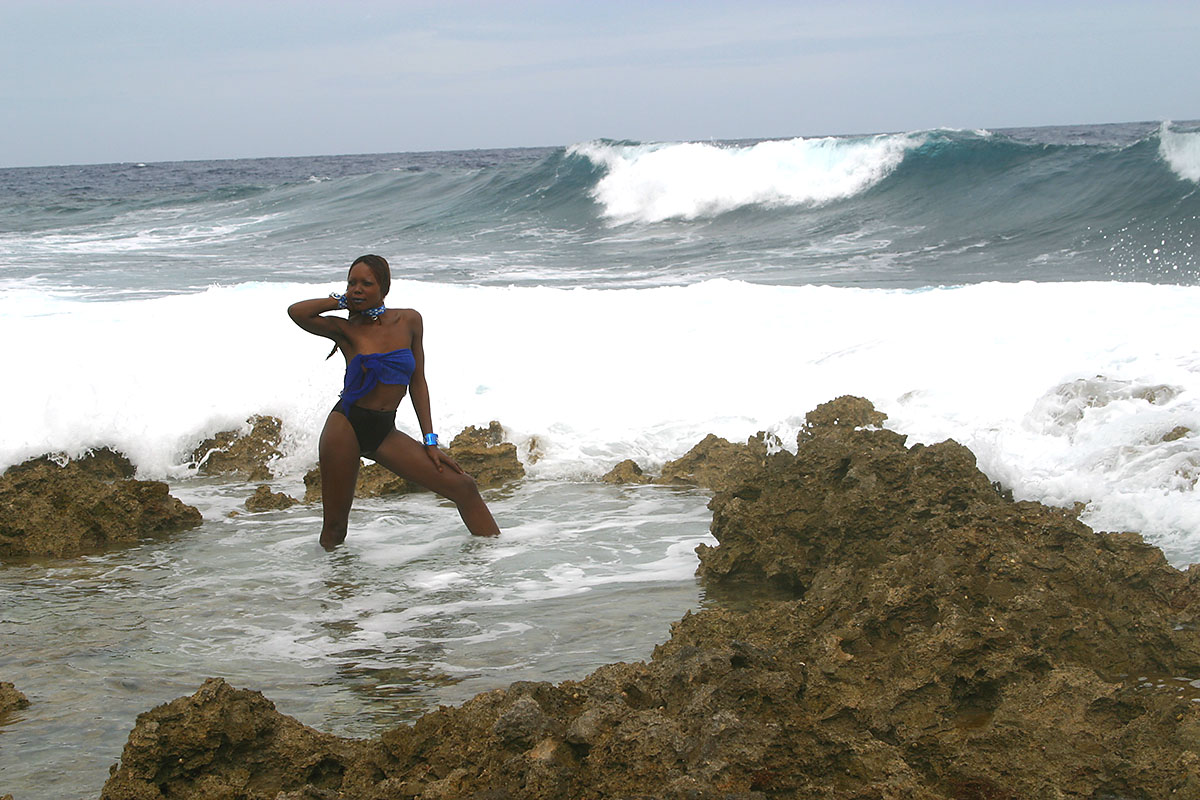 And not the best of the lot for her, but I picked one that shows the waves well, when the incident occurred she had less clothes on and a slightly different part of the beach.

Almost forgot to mention I was shooting almost into the sun and should have been shooting away form the sun, but lesson learned the hard way so to speak.

I would have loved to have been there to help with several assistants. One really shouldn't work under these conditions without help. I broke a rib this way back in August 2018 and it hasn't healed! There are also rip tides and believe it or not, your model could be swept away!

Also there's a lot more you can do with editing today!

Any chance you have the RAW files still?

I do have the raw files on DVD archive as well my primary backup drive and if it still works the original hard drive (I never get rid of a drive if I can avoid it)
The picture is already somewhat fixed as I mentioned.
And other than one thing that got lost and is no longer supported, yep a lot of things are far better and easier to edit. I am old enough to remember doing touch-ups with ink and a brush (way before Photoshop and the Internet).

If I could have had an assistant or two that would have been great. Second time I was in Jamaica I had a girlfriend/assistant as well the driver I hired for the day was more helpful than the first time.

I will see if I can dig it up tomorrow.

Are you comfortable with Photoshop, Lightroom or the equivalent?

If you are a darkroom inhabitant you may or may not have gotten into editing outside the real sanctuary of the darkroom!

I prefer Photoshop, although I stopped at CS6, the last of the perpetual licenses.

Just unless it is for someone or I think I have a real chance of making money off of it, I don't like spending the time needed to do it right.

Also a lot of folks are preferring natural-unedited shots these days, warts and all so to speak. So I am doing less editing these days.

Tim Dolan (Longwatcher) said:
I prefer Photoshop, although I stopped at CS6, the last of the perpetual licenses.
Click to expand...

i have been amazed by Snapseed as one can do everything with ones smart phone and one finger: fast and intuitive!


Tim Dolan (Longwatcher) said:
Just unless it is for someone or I think I have a real chance of making money off of it, I don't like spending the time needed to do it right.
Click to expand...

We will have galleries here to sell images. Being built now! Can’t promise sales, LOL ??

Tim Dolan (Longwatcher) said:
Also a lot of folks are preferring natural-unedited shots these days, warts and all so to speak. So I am doing less editing these days.
Click to expand...

I have only seen that with Polaroids or Fuji instant film.

Is there a recognized artist using digital cameras, who exhibits flaws & all?

I have seen folk leaving litter in landscape or a post that spoils a perfect composition not removed out of concerns for “the truth”!