My World: Guess the Evil in this old abandoned house! 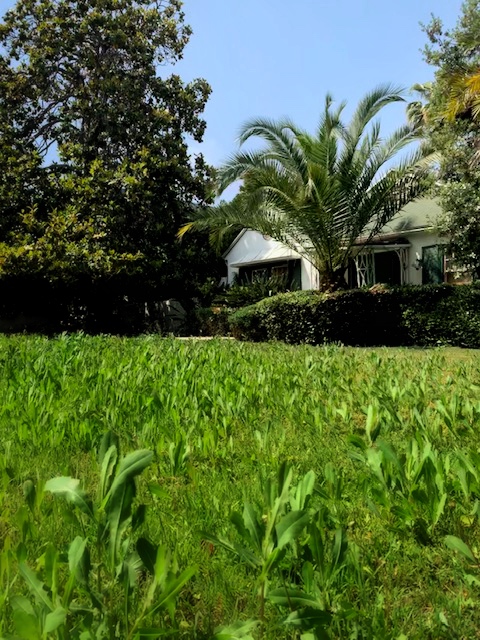 I have been documenting a neglected and apparently empty 90 year old single story clapboard house that would be unsurprising on a lakeside that had been abandoned due to toxic runoff.

But this is in Beverly Hills, California, an elite neighborhood with wealthy estates.

Ever so often, the fence in the back alley behind the homes, is vandalized and the police come to remove vagrants who are camping in there.

Sometimes, they call in a Police Helicopter from. Los Angeles to track down a more dangerous robber who has his hideout there. A decade ago, the Elite Swat Team used it for practice taking down a terrorist group. In the past several years we have only seen a few poor homeless women there, so I thought it was fine for wandering around in the overgrown garden to photograph wild plants brought there by birds or the wind!

But for me, it’s the source of the most fabulous Magnolia leaves, which turn golden in the autumn when they fall.

So while photographing the garden I explored a little more aggressively and was sickened by what I found.

I am about to call the police.

What shocked me to the core and made be want to throw up?

Can you guess what the evil was lurking there?

Several ideas come to mind, because the abandoned house seems to be the perfect setup for a crime series. But you don't give us enough info to find out what it really is.

Jerome Marot said:
Several ideas come to mind, because the abandoned house seems to be the perfect setup for a crime series. But you don't give us enough info to find out what it really is.
Click to expand...

Thanks for visiting, Jerome!


One man, a skinhead, was caught leaving my house a year back, and as he left he passed me and mumbled,

“I’ll be back. I’m fixing the sink I need more tools from my truck!”

I let him pass, but then when he ran off down an alley, I knew he was a crook! I remembered seeing him by the broken fence at the back of the abandoned house.

I chased him until I realized I was unarmed, and he was well built and could have had a weapon.

Got the police there, but he escaped.

Then this finding. Two days ago. The police just left but can’t get in. They’ll need a warrant to enter!

Meanwhile we have installed a new security system.

But what’s in there that is so evil

?? So you met a guy a year back at your house. Presumably, the guy is a burglar of sorts and uses the abandoned house as his base? What you found at the house is not sufficient for the police to enter without a warrant, so I would guess stolen goods?

Well, Jerome, that would be bad, but hardly evil!

I might not like thieves, but they are simply selfish and sneaky taking other folks hard earned stuff!

What I saw was the tracks of evil!

I got a shot with flash via the hinged mail slot:

Not teenagers, for sure. Marginals of society are hanging out in this secret refuge.

Folk pass the in the alleyway behind this ignored house; young girls and boys taking a shortcut home, a maid coming to work at 6:30 am before it is fully light.

Thieves hanging out might be illegal but Who gets harmed. Obsessed fanatics OTOH could pose a grave risk!

Over the past 40 years the invaders have come, been caught or chased away time and again. But we dis not know the extent of anti-social animus breeding there! To me it was just place to get golden magnolia leaves in the autumn!

Now it’s very different. It’s more serious, dreadful and grim. Did anyone act out these sentiments written on the walls

There may or may not be already be bodies buried in there!

Who are these miscreants. Is it humor or dead serious flashings of committed brains or brains that need to be committed?

What does the writing mean?

Was it first a group of White extremists with antisemetic hate followed by African American homeless who were enraged by the signs of the earlier dwellers!

Or did one person write both messages?

Hatred and schizophrenia, fascists or gang-bangers, folk living here with no respect for humanity?

Frankly, I tend to associate graffiti in an abandoned house more with silly young males with too much testosterone than with organised extremists. I understand that your life history makes you particular sensitive to the symbols used, however. This being said, I would also have called the police.

Jerome Marot said:
Frankly, I tend to associate graffiti in an abandoned house more with silly young males with too much testosterone than with organised extremists. I understand that your life history makes you particular sensitive to the symbols used, however. This being said, I would also have called the police.
Click to expand...

In Europe race and ethnicity are learned and recognized as simply as boys by the age of 10 being able name most makes of cars....

Here in the USA, for Jews, it never comes up. Only in each visit to Germany or Switzerland, has there been such a total absence of animus in every social interaction, for every single day my of my many visits.

......I had never been to a day at school in the U.K., (for 23, years of my life nor almost all weeks in France or any day in Turkey, where my ethnicity wasn’t hinted at or declared very rudely in my face.

So yes, I am over-sensitive, to the nth!

But this single appearance of the Swastika on a wall, bad never had never occurred anywhere in my own sphere of life in decades. We do not have wild teenagers ever being in that house! In fact there are none seen in my entire neighborhood.

........except egging cars on Halloween, way after the lines of children, dressed as fabulous movie or animal characters visit, for “trick and treats” to homes with illuminated decorated faces carved in giant pumpkins and welcoming lights and cotton candy over the garden and doorways!

The surge of “White Nationalists@? To my grown children it’s a product they relate to “Trump’s” encouraging his base of right wing under-educated whites!

We never before saw a Synagogue or a Church defaced or attacked once a month, as we have under Trump.

To see it in my treasured wild plants and flowers, is a deep shock to my being! 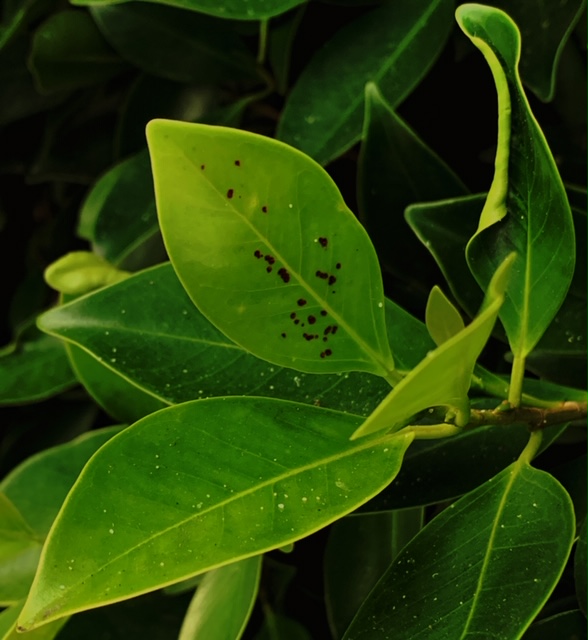 ......and this desolate house is merely the other side of a tall green hedge of ficus trees, (infested in balance with Cuban thrip secretly growing in the leaves), from my own open happy home!

But, back to your suggestions, Jerome, I might use it as a start to a story of some evil that lurks ready to multiply when conditions are opportune!

Causes one to think of a sneaking growing monster pollution not seen yet because it is young yet- when it is finished growing to adult stage it can be seen though somewhat transparent and sly ..... it will endanger all life if not destroyed but how can it be done. Fire and other chemicals make it grow-being somewhat transparent it can hide. Look like part of the house..plants grass etc. It does have an achilles heel though. How to find it... ?

Thanks. Charlotte and Jerome for sharing your ideas!

Am not ready to write it, it has to incubate!

Whew. Not so bad. Hating white people is sort of politically correct, isn't it? For a minute I was thinking the worst. Like a vote for Trump bumper sticker or some such. Much relieved.

Jim Galli said:
Whew. Not so bad. Hating white people is sort of politically correct, isn't it? For a minute I was thinking the worst. Like a vote for Trump bumper sticker or some such. Much relieved.
Click to expand...

Unfortunately, being male, (and even worse, white), right now, one is not “in Vogue”!

When I tried to tell my female assistant that she got the math wrong on a calculation, I was accused of “mansplaining” to exert my “position of power”!

Half of major public art RFQ, notices hint they actually might only want an artist of color or a woman!

“Previous work demonstrating compassion to the community”, “fitting in with the existing art”, (which has only other-than-Caucasian faces), “responsive to diversity”, “sensitive to the roles of women”

We sense that Joe Biden is so unqualified because he is not “a person of color” and too “Middle of the road”, staid old fashioned Christian!

I can’t tolerate demeaning people because of some “tag”!