Ten thousand or so years ago glaciers covered much of Illinois during the last ice age. For the most part, the ice entered from Lake Michigan and plowed toward the southwest in fits and starts. Detailed surface topography maps of the state provide clear evidence of this time.

DeKalb County has a nature preserve named Wilkinson Renwick Marsh, which exists because it is one of the very few prairie pothole marshes in Illinois. Essentially, a big block of glacial ice parked in the area for a long enough time to form pothole, or basin, into which local water drains. Aside from evaporation, there is no outlet for this water. The resulting marsh has been named a state natural area.

One last bit of history: late in the 19th century the Chicago Great Western Railway ran directly through this marsh. Attempts to drain it failed so it has never been filled or farmed, and mostly remains the wetlands it has been for centuries.

Interestingly, aside from occasional birders or dog walkers, very few locals know about the place or care about its history. I think this is just as well. A place ignored is often a place preserved. 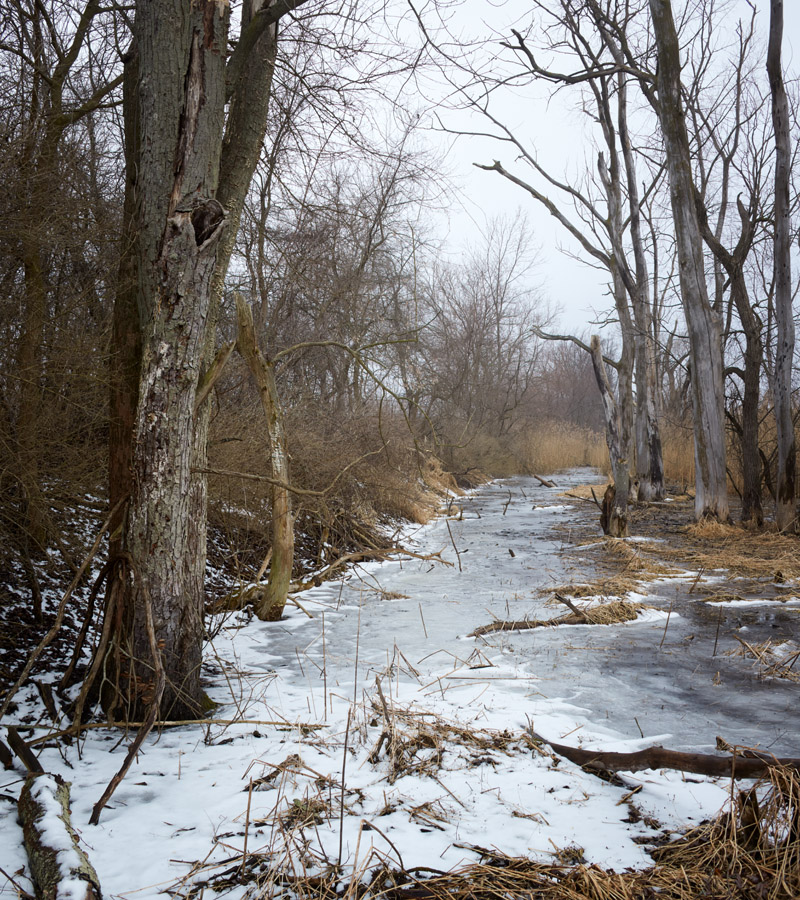 North of the Railway​

There are movies where folk get lost and find themselves in an unmapped zone where ancient life still goes on, unbeknown to the civilized world. I never believed any of these fantasies. Bit now I realize that there could indeed be places, even today, that are actually lost in "plane sight", as you have discovered.

North of the Railway​
Tom,

I am taken by this image. Of course you took more!

Do you have shots to the right? I'd love to see the full width of the frozen water!

No other photos taken there from last Friday have been posted to my galleries. However, this one, taken a couple months ago, includes the area to the right. When the place became a county preserve over twenty years ago, all previous attempts at drainage ceased. As a result, the woods that grew in this section became waterlogged and quickly died. The trees have become great habitat for the local critters.

Insects, Woodpeckers, rats and what else?

This would be a dangerous place to be ignored for foreign invasive species!