There are over 2,000 State of California recycling centers for aluminum soda cans and plastic bottles.

So for the poor and homeless, the unlocked trash bins of Beverly Hills upscale streets are a safe hunting ground for extra money without begging!

It’s a simple process for the organized. From my observation, one can recover 2-20 pieces from each unlocked bin. In Cities like Los Angeles and Long Beach, trash bins that are collected by City trucks have gravity lock!

Here in Beverly Hills they are open for the getting, ??

​
A cache of 50 collected in an hour only brings in $5:00, but for the homeless that is substantial! It’s a hard economy, but it’s part of the recycling effort. In fact, I am suspicious that the non-pilfered garbage might not be sorted and simply go to the landfill. I will ask!

The world of us is getting trashed!

charlotte thompson said:
The world of us is getting trashed!
Click to expand...

Actually, these guys may be doing good!

I suspect cities are quietly dumping stuff in landfills

Asher Kelman said:
There are over 2,000 State of California recycling centers for aluminum soda cans and plastic bottles.

So for the poor and homeless, the unlocked trash bins of Beverly Hills upscale streets are a safe hunting ground for extra money without begging!
Click to expand...

That is indeed a fascinating subject, but first, a picture: 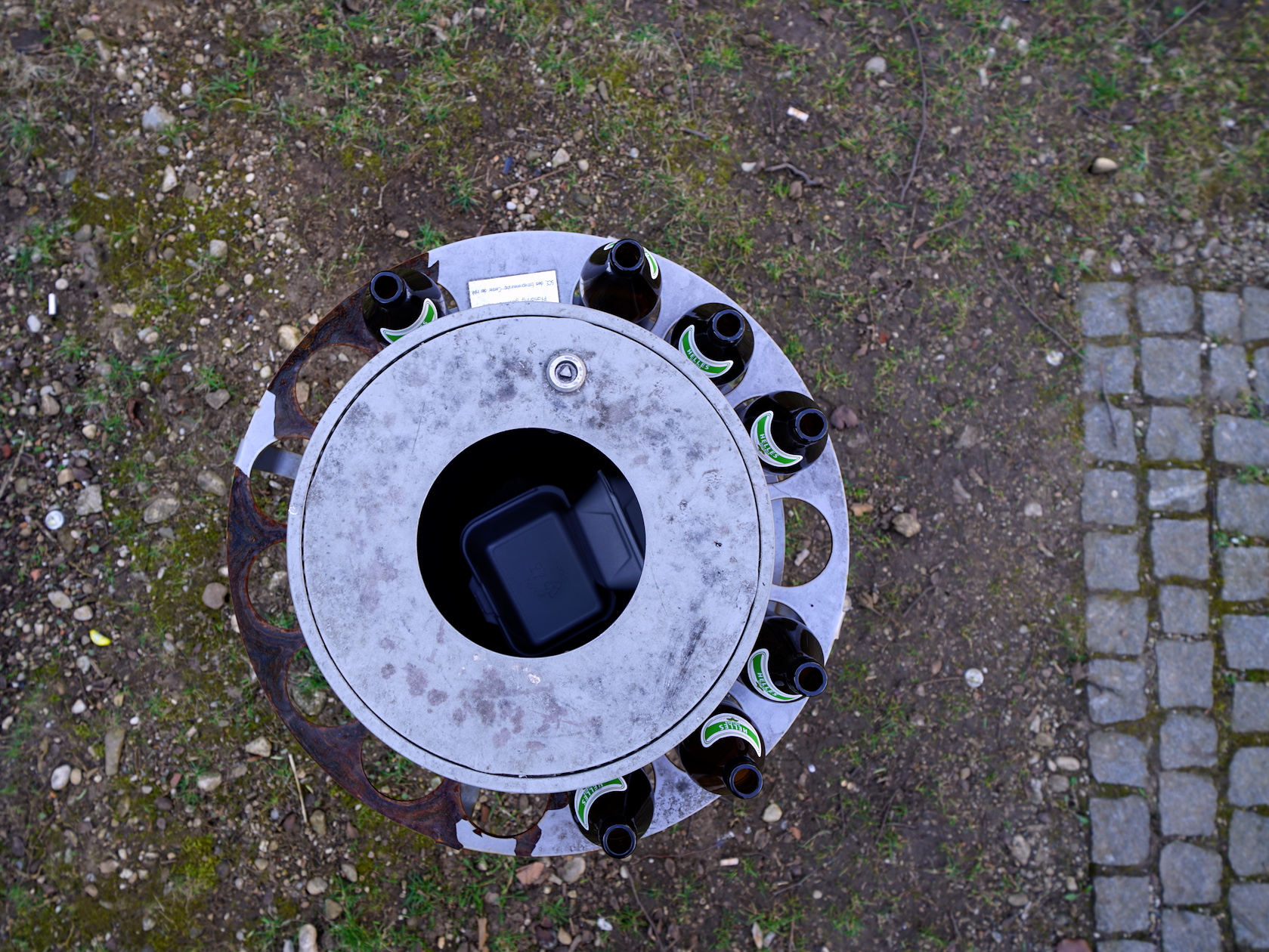 ​
This is a rubbish bin viewed from the top (yes, I know, it looks more symmetrical that way but people don't quite understand how it is built from the image). Around the bin is a structure to leave the empty bottles for anyone to take them. Less effort for all.

This is not the standard bin in Munich.

What is standard in Munich (and the whole of Germany) is the shape of the beer bottles. There are only a few. This form is called "Euro-flasche" and is one of the most common. These were always refundable, as it made sense for the breweries (and caused a shortage of bottles after the opening of the iron curtain as, suddenly, a lot more beer was exported and the bottles never came back, but I digress...).

Then, in 2003, Germany introduced a new legislation, basically making deposit compulsory on most containers, including non-reusable ones (wine is an exception). Deposit varies from 0.08€ to 0.25€. It was an outrage at first, then most people brought their bottles back and, finally, the situation evolved to that it is a paid occupation for... let just say some people, as I don't think the wording "street people" is appropriate.

Asher Kelman said:
A cache of 50 collected in an hour only brings in $5:00, but for the homeless that is substantial!
Click to expand...

That where it gets really interesting. It is not substantial. I believe that any of these people could get more money begging or, in Munich where the economy is doing surprisingly well, having a slightly more regular job. Note that this is a slightly more educated guess then I am willing to explain.

I can understand why the people collecting bottles would not beg. Begging brings surprisingly large amounts of money but there are various catches: begging is often organised, so not everybody can get in and is surprisingly destructive of one's abilities to function in society. I don't support begging and by stating so I am not dismissive of the beggars, but on the system. It is like drugs: I don't criticise the addicts, but it is still something one should not do.

I am not really sure why the same people do not run a more standard job. I suspect the explanation would enlighten us on the dark side of human nature. I suspect that the people collecting bottles are not in a situation to negotiate a salary, so that they fear that a regular job is not a good deal for them. There are a surprisingly high amount of jobs with no pay (including photographer...). Somebody without the ability to negotiate and push through will not get the promised salary at the end of the day.

That makes jobs where the price is set beforehand and is the same for all particularly interesting for these people. Jobs like collecting bottles, working as a Uber chauffeur, bicycle food delivery, etc...

Fascinating subject. BTW: recycling of aluminium containers makes sense, environmentally. There is lots of energy in aluminium. Recycling of plastic bottles often less so as it takes more energy to bring the bottle back to the factory as there is energy in the material. The cost of transportation (on lorries which use fossile fuels...) is surprisingly high.

I had trouble with using “homeless” or “street people” for my writings gmgete. “Some people” is far better a term since one would then imagine a range of candidates for that job, LOL!

Likely as not, my efficient bottle & can collector, wouldn’t do well in an interview for McDonalds!

A "reciclador" in Cali, Colombia taking a siesta. Fair wage policies keeps many of these street people living on the street. 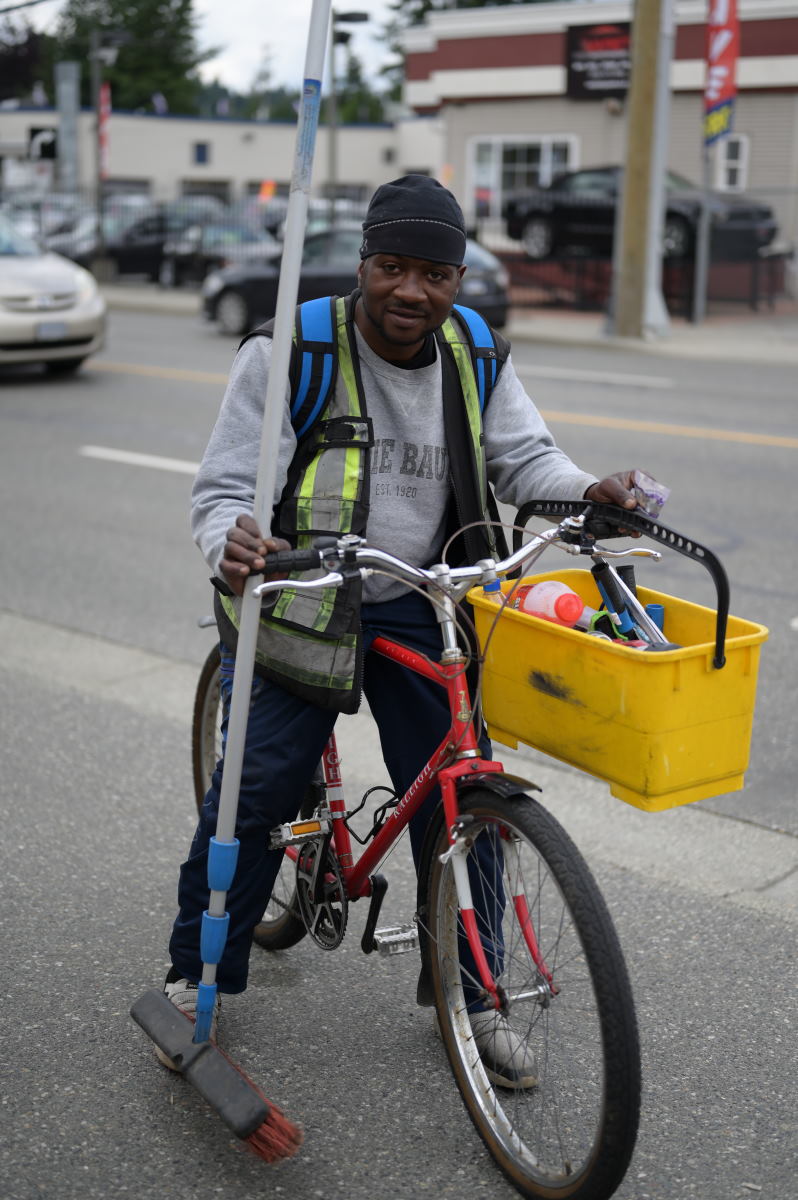 Can you explain that and the broom?

Can you explain that and the broom?

The point is that there are people who are willing to work for less than minimum wage but it is illegal for an employer to pay less. However there are circumstances where an employer can't justify hiring a full time or part time employee for some tasks. This is where an employer should be able to hire an individual on a casual basis.

I have seen the person in the photograph on a number of occasions early in the morning or late evening sweeping or sometimes cleaning windows of convenience stores and gas stations that are open 24/7. The guy is obsessive about his work and is meticulous about doing a good job. The thing is he just shows up and starts working, he is not hired by any of the establishments. He does not ask for anything form anyone but people give him pocket change for his excellent work.

So there should be a mechanism in place for people who want to perform meaningful tasks that they are capable of. Tasks that would give them a sense of self worth as apposed to digging through garbage.

I have seen many street people who work hard collecting bottles and transporting there goods to the recycling depot. They certainly don't look lazy and do the best they can .

Good points! They should make a category for mobile services whereby the person works at unrelated addresses!