Most of our photography is done now with two compact cameras, a Canon PowerShot G16 and a Panasonic Lumix DMC-ZS100. Both have permanent zoom lenses with "eyelids" to protect the lens when in a pocket, and indeed either of these will go easily in a pocket in the dock pants I wear most of the time (or handily into Carla's purse).

They are very close to the same size, give or take a couple of millimeters in one dimension or the other:

Canon G16 and Panasonic ZS100​
Here I want to do some very primitive (perhaps presumptuous) "theoretical" comparisons between these cameras as to the matter of photometric performance. Here are some of the pertinent specifications of the two cameras:

But that having been said, I will make some comparisons that essentially assume that relationship.

If we go through all the bush-league algebra, we find that the size of the delivered image pixel on the camera sensor is 2.79 times larger for the ZS100 than the G16. So we can realize for the same photometric exposure, there will be 2.79 times as much phtometric energy per (delivered) pixel for the ZS100 as for the G16.

For the same scene and the same shutter speed, this would mean about 2.8 times as much phtometric energy per unit area for the G16 as for the ZS100.

So for what such a comparison is worth, we find that the smaller maximum aperture on the ZS100 almost exactly negates the benefit (in this primitive comparison) of the ZS100's larger sensor.

Now of course, even if the assumed effects on noise performance were valid, this doesn't overall negate the advantage of the larger sensor of the ZS100. For example, "all other things being equal", we should be able to get comparable noise performance in any given situation with the ZS100 by using a smaller aperture, giving an advantage in depth of field.

But of course this is all conjecture. What will turn out to be the actual difference in performance of the two machines in different situations will only turn up over a long time of use.

In any case, they are both lovely machines.

Now as a matter of interest, our Panasonic Lumix DMC-FZ1000 uses the same sensor as the ZS100, but its lens is 25-400 mm ff35 equivalent, f/2.8-4.0. So we might expect with it to be better able to exploit the larger sensor where a larger aperture is workable from a depth of field basis. But this camera is gigantically larger, and rather heavier, than the ZS1000: 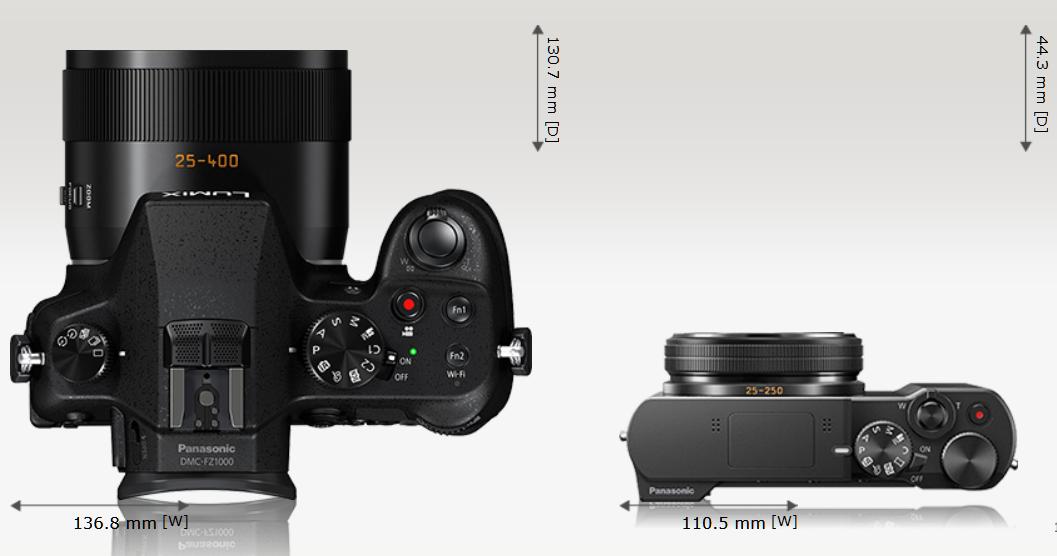