Where Can the Homeless Denizens Sleep?

So folk plant bushes outside their stores, design public benches with hard divisions to prevent sleeping 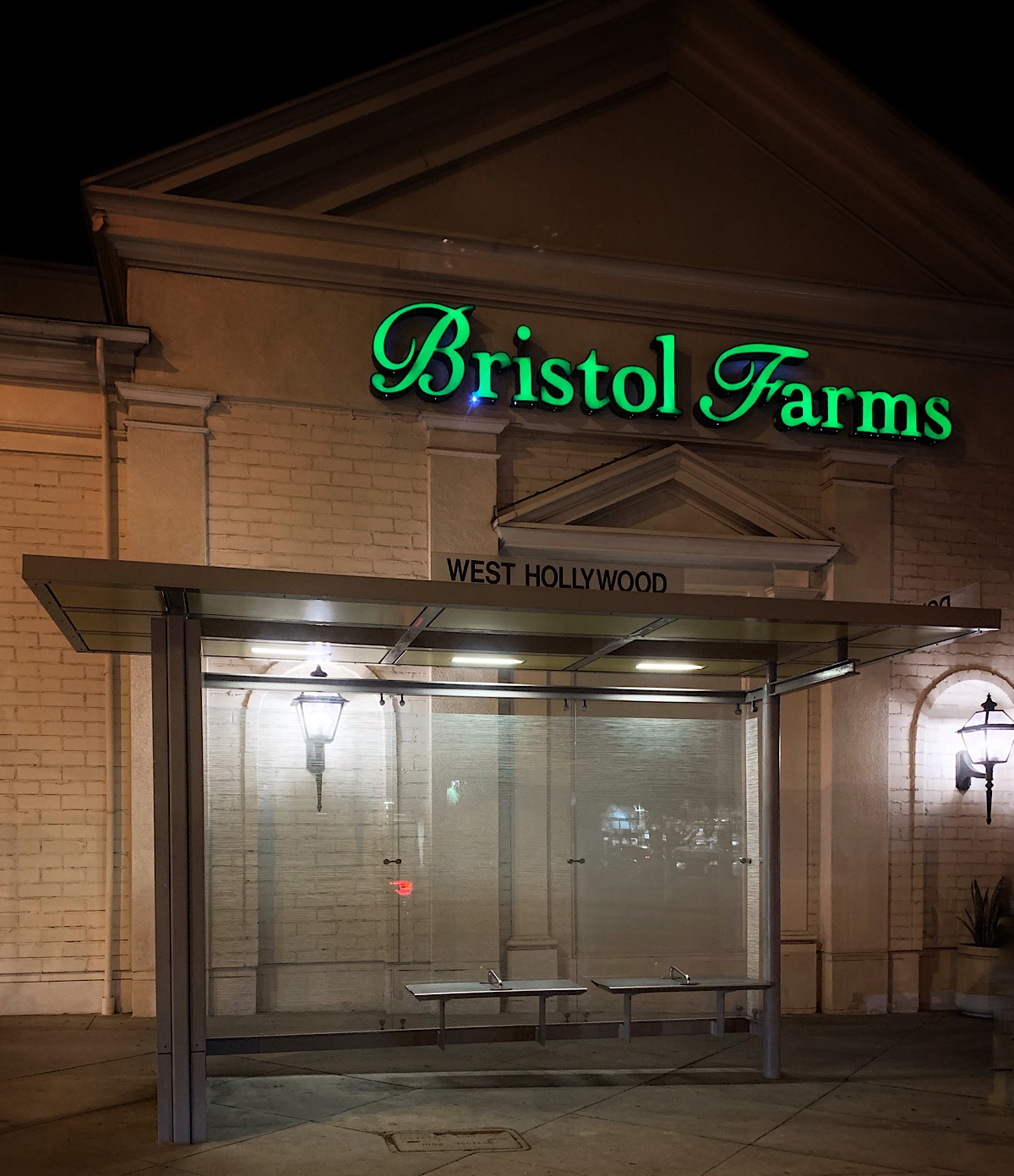 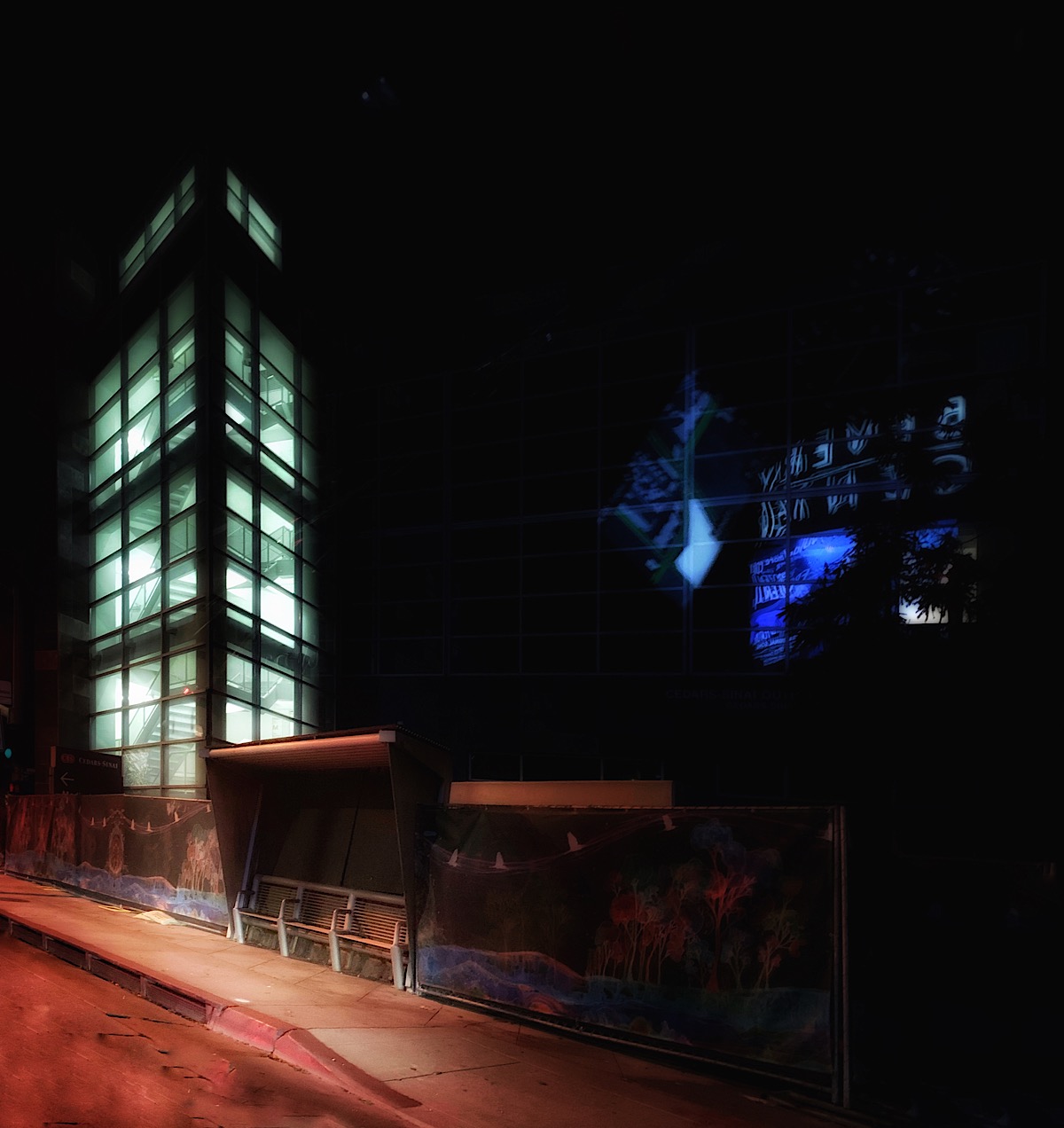 and try to still create shelters.

There is a crisis. Everyone wants to help: but in someone else’s neighborhood. 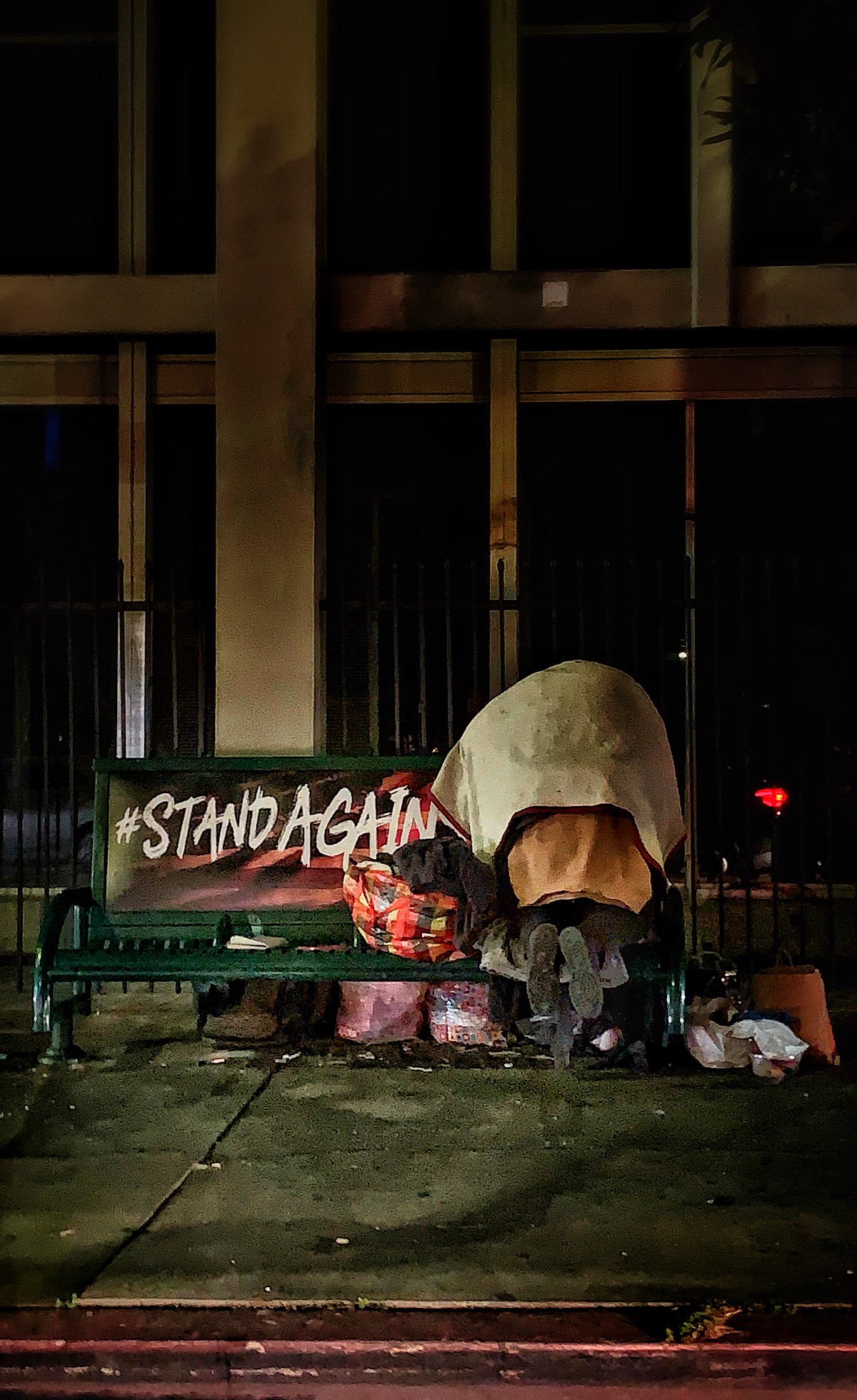 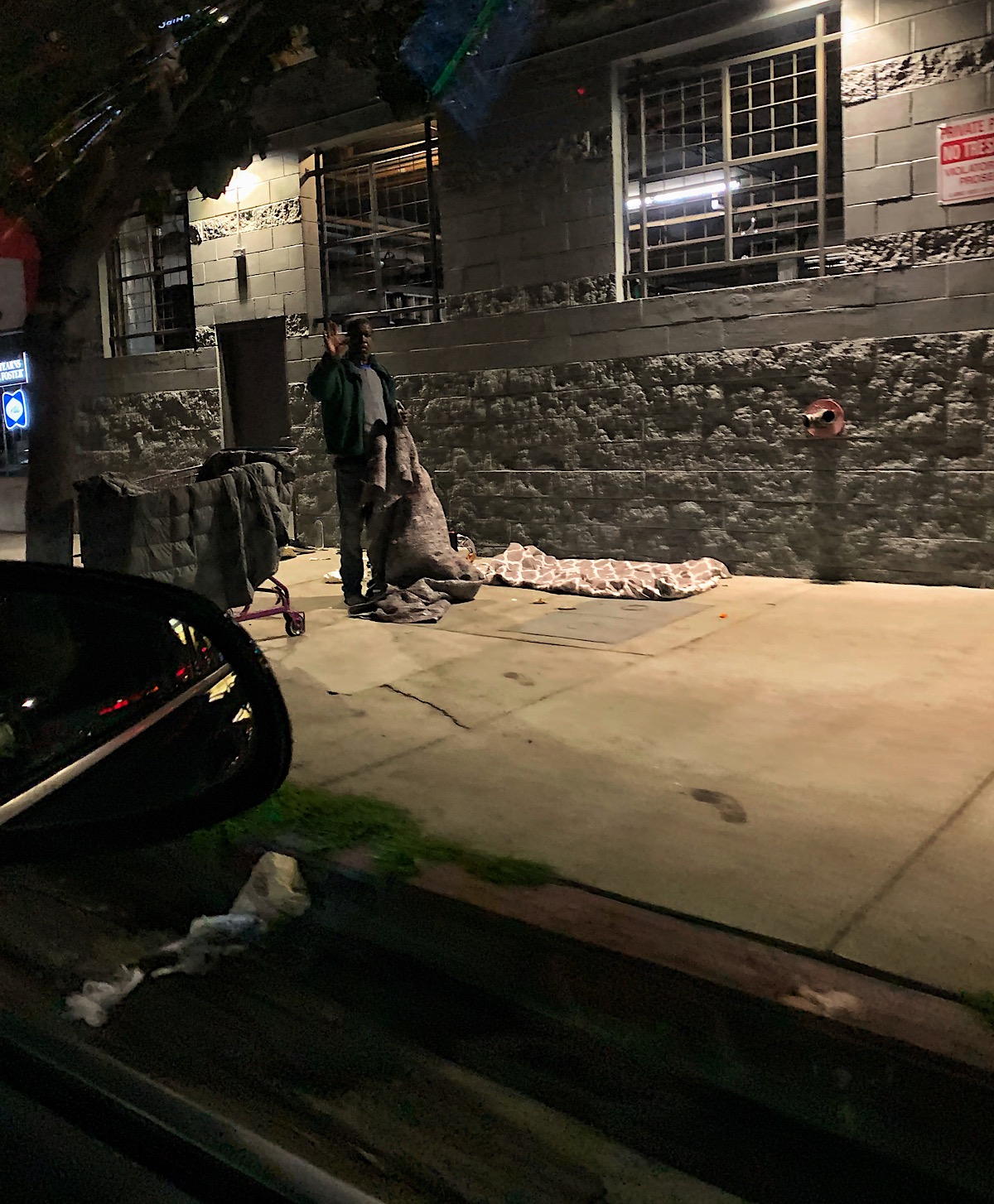 Your comments and pictures welcome!

welcome to the present world - this is called hostile architecture or defensive architecture (one link per word).
It is a phenomenon far more common than you might imagine as the 'features' are sometimes subtle and disguised as helpful elements (read the Atlas Obscura article referenced in the first link).

I have seen such things in Munich as well but I have to look if I have pictures...

Sometimes the development goes the other way.

All links go to metafilter - thanks to the individual posters.

The answer to your question should be 'a home'. Finland is taking this route (Economist, paywalled, Christian Science Monitor, Guardian)

welcome to the present world - this is called hostile architecture or defensive architecture (one link per word).
It is a phenomenon far more common than you might imagine as the 'features' are sometimes subtle and disguised as helpful elements (read the Atlas Obscura article referenced in the first link).

I have seen such things in Munich as well but I have to look if I have pictures...

Sometimes the development goes the other way.

All links go to metafilter - thanks to the individual posters.

The answer to your question should be 'a home'. Finland is taking this route (Economist, paywalled, Christian Science Monitor, Guardian)

A superb response, Michael. I read every one of your links. I hadn’t realized I was not the only person stunned at the hostile inventiveness of designers and architects.

Leaving aside the homeless for a moment, skate boarders being blocked by added obstructions to their destructive grinding of any available horizontal surface is sometimes justified!

They are not any handicapped class that deserve protection!

I have a public art sculpture and the base on one side has its paint ground off by skate boarders!

So in future, I will include in my design artistic obstructions to prevent such costly damage!

But for the homeless when there is no alternative, it does appear cruel!

So, tonight I found just two folk with obviously no homes. One eating in the shadows of the cactus garden, and here’s the second bedding down under the very bright lights of the Episcopalian Church.

The do cater to diverse folk. Modern service, classical, Farsi and Indonesian! 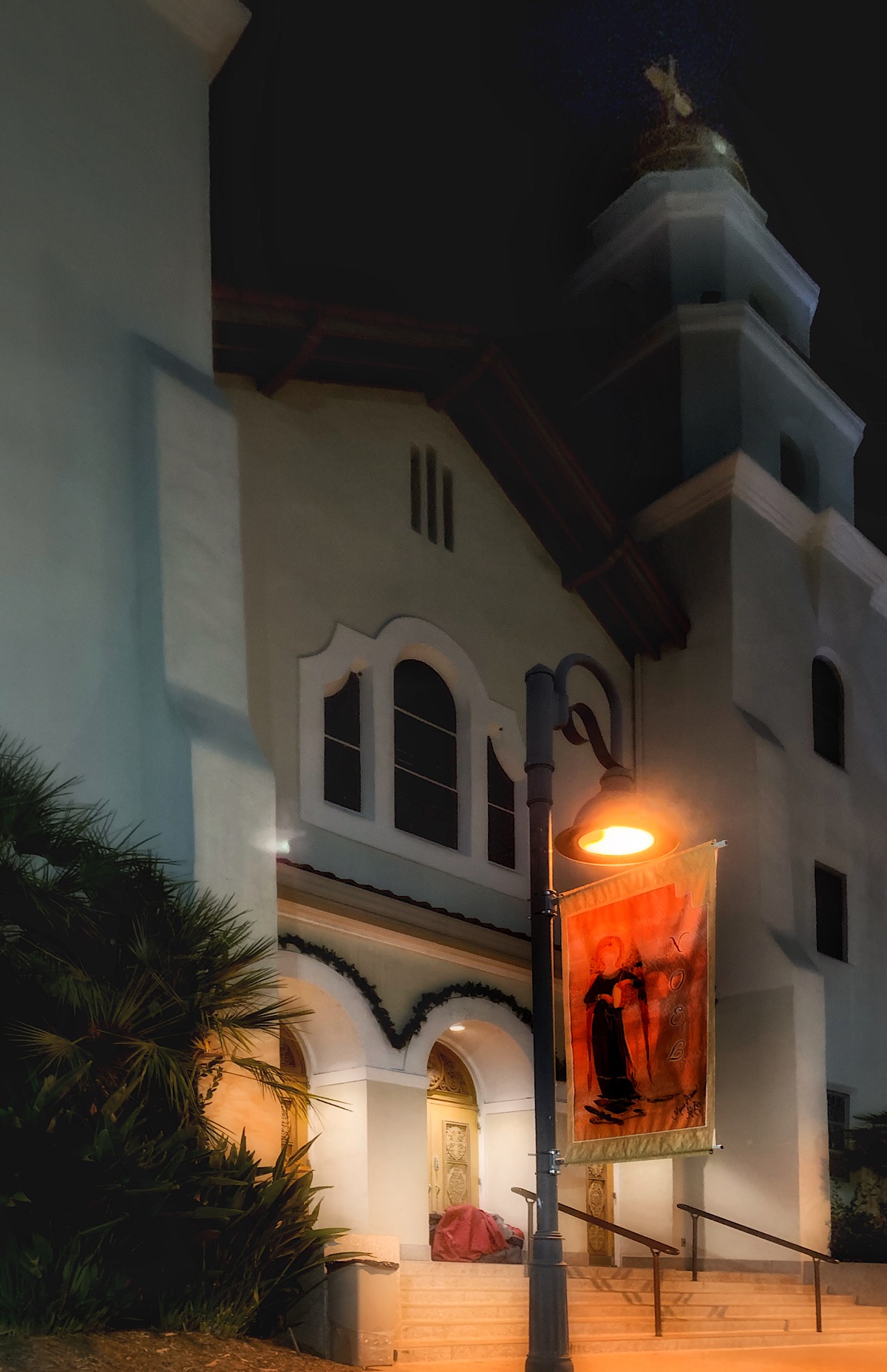 Next to the Church was a favorite hangout for the homeless getting food from the Church.

Folk were sleeping on the grass in the park created for residents of the neighborhood. So the City removed all the offending park benches the homeless slept on in their favorite circle convenient to the Church kitchen!

But to be really certain, the City planted thick bushes. 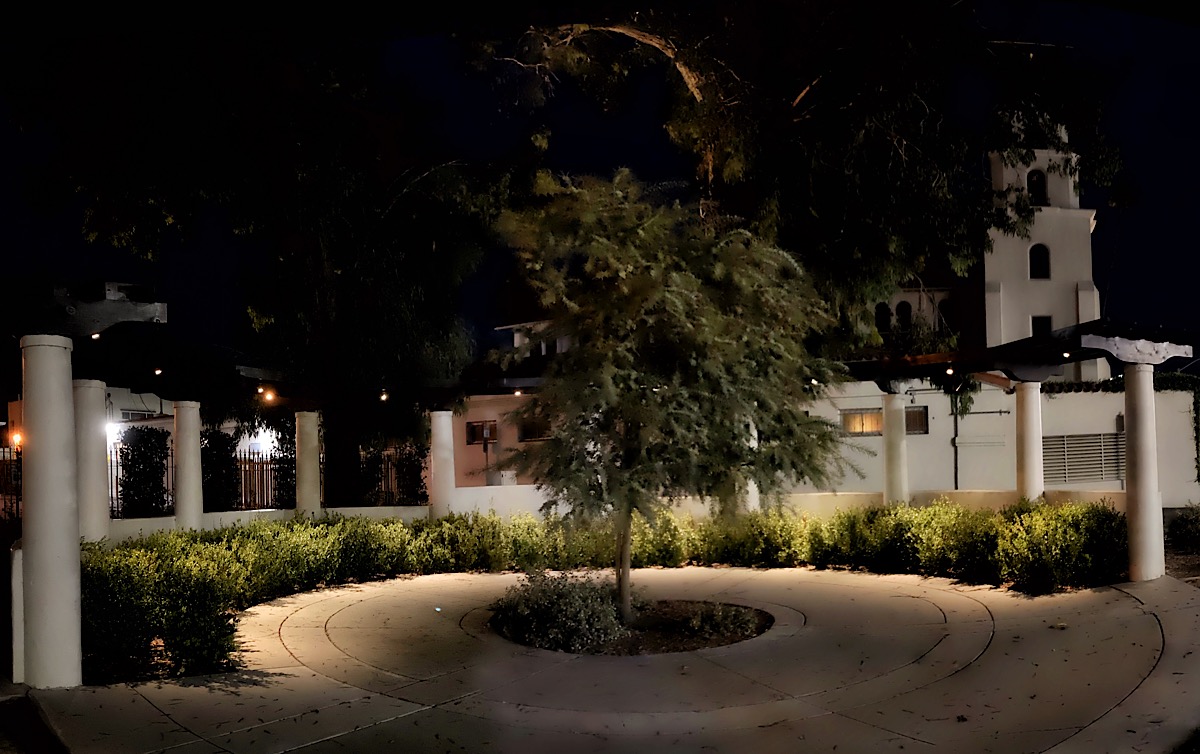 ​
In addition the found a need to install a plethora of concrete access covers representing the most bizarre organization of utilities or just creative meanness!

Now here, wouldn’t you think this is such an inviting store: bright lights, a welcome mat and not only a bronze boar but a bowl of water for your pooch! 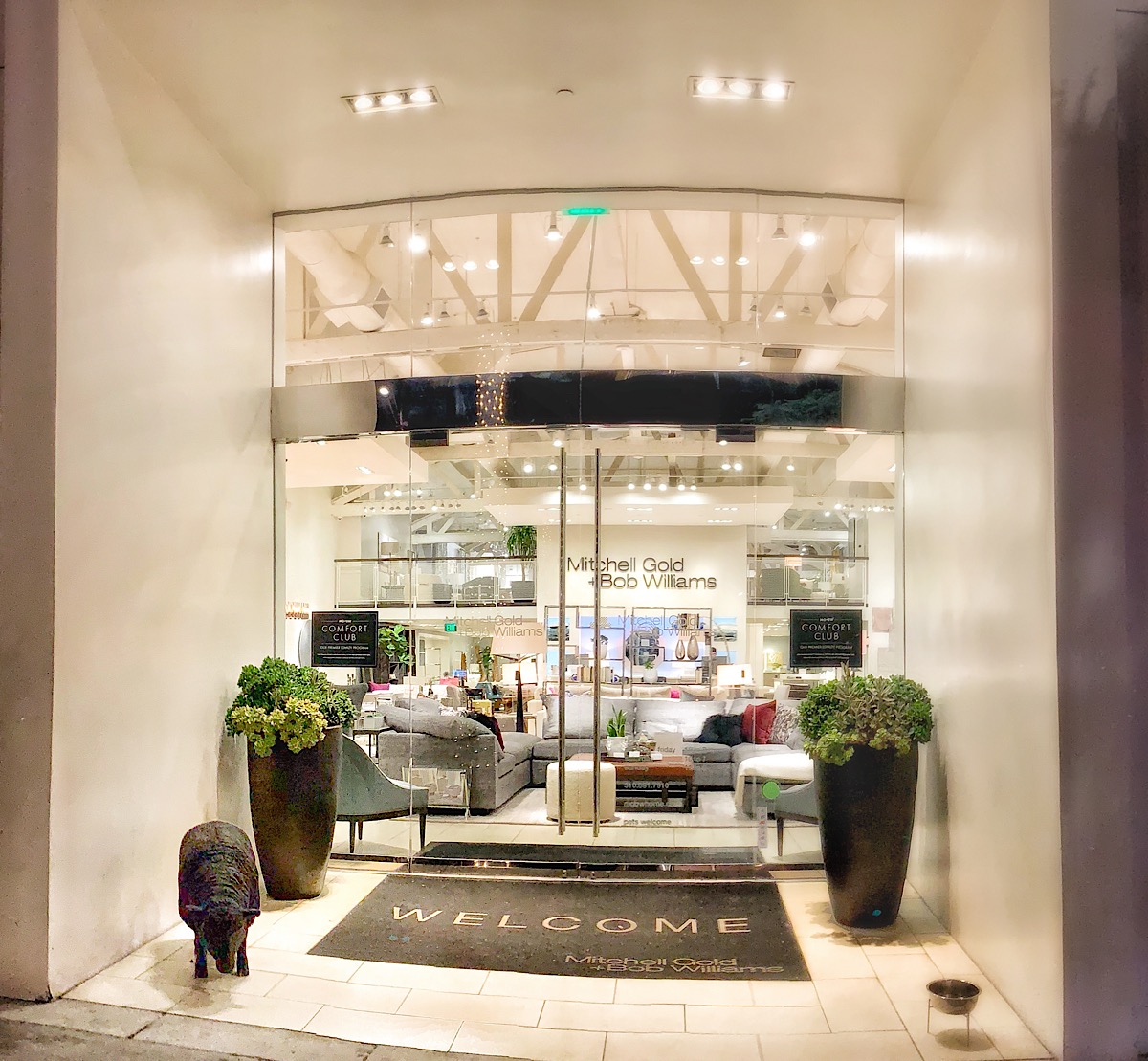 Only the highly cynical would even imagine this is a setup to make bedding down awkward!

I asked the local police on patrol:

“Why did our City attract so few homeless to sleep in our very safe, clean and well-kept streets?”

He told me that “We have strict codes that simply don’t permit any of that!”

“Why, do you ask? Would you want them here?”

What is surprising is that state law doesn’t allow the Police to force folk to leave, unless they have shelter for them!

For sure the many neighboring communities have shacks, tents and piles of refuse in front of more than a few stores! The poorer the municipality, the more refuse and even encampments!

Our City is exceptional! It must be doing something very right and noble or exactly the opposite!

In my tour of the neighborhood, I can across my namesake “Asher” in the form of a man pod crane! 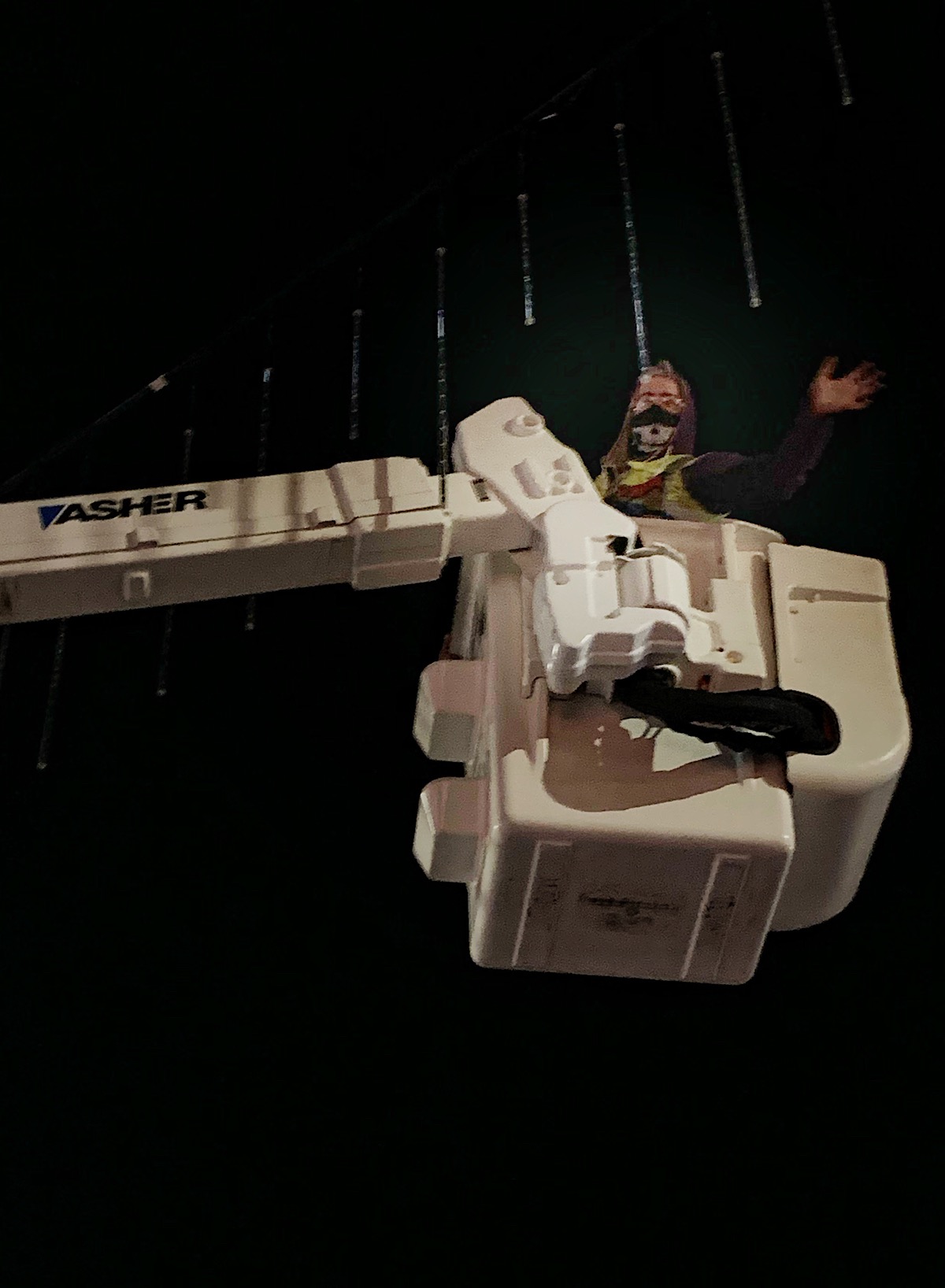 ​
Doesn’t qualify for being homeless, but someone has to take down the investment in Holiday decorations and store it for the next holy season of goodwill!

I have a slightly different but not politically correct interpretation. But let me fist say that I am not criticising the homeless for what they do. In the same situation, I would probably do the same. And even if I am not in their situation presently, I am painfully aware that with the present collapse of social states in Europe, the frontier between me and them is more tenuous than I would like. So I am not criticising the people, just describing the situation as I understand it.

First, I would like to remind us that we are all hypocrites when we ask for help for the homeless, because none of us is helping them. Asher, you don't invite them to plant their tents on your lawn. I know I don't let them sleep in the passageway to my flat. We simply claim exclusive rights to a pice of land, either because we live there or because we planted art in the middle of the place and we tell the rest of the world to piss off. Don't touch, it is mine. You ruin the place with your skateboard. You chase the customers with your smell. I don't want your tent here. At best we like the abstract idea that someone, the state of Finland maybe, will take charge and solve the problem or at least move it where we don't see it.

And the homeless? Well... they are human as we are, so they do just the same. If they can secure a place for a tent or a pad, they tell the others to piss off. They fight for the best spots, just as we do. I took 3 pictures to illustrate.

Munich has snow in winter (although not this year, and that worries the climate conscious in me... different story) and snow is slippery. On strategic places you will find containers for grit (the tiny sharp stones). This is one of this containers, the closest to where I live. 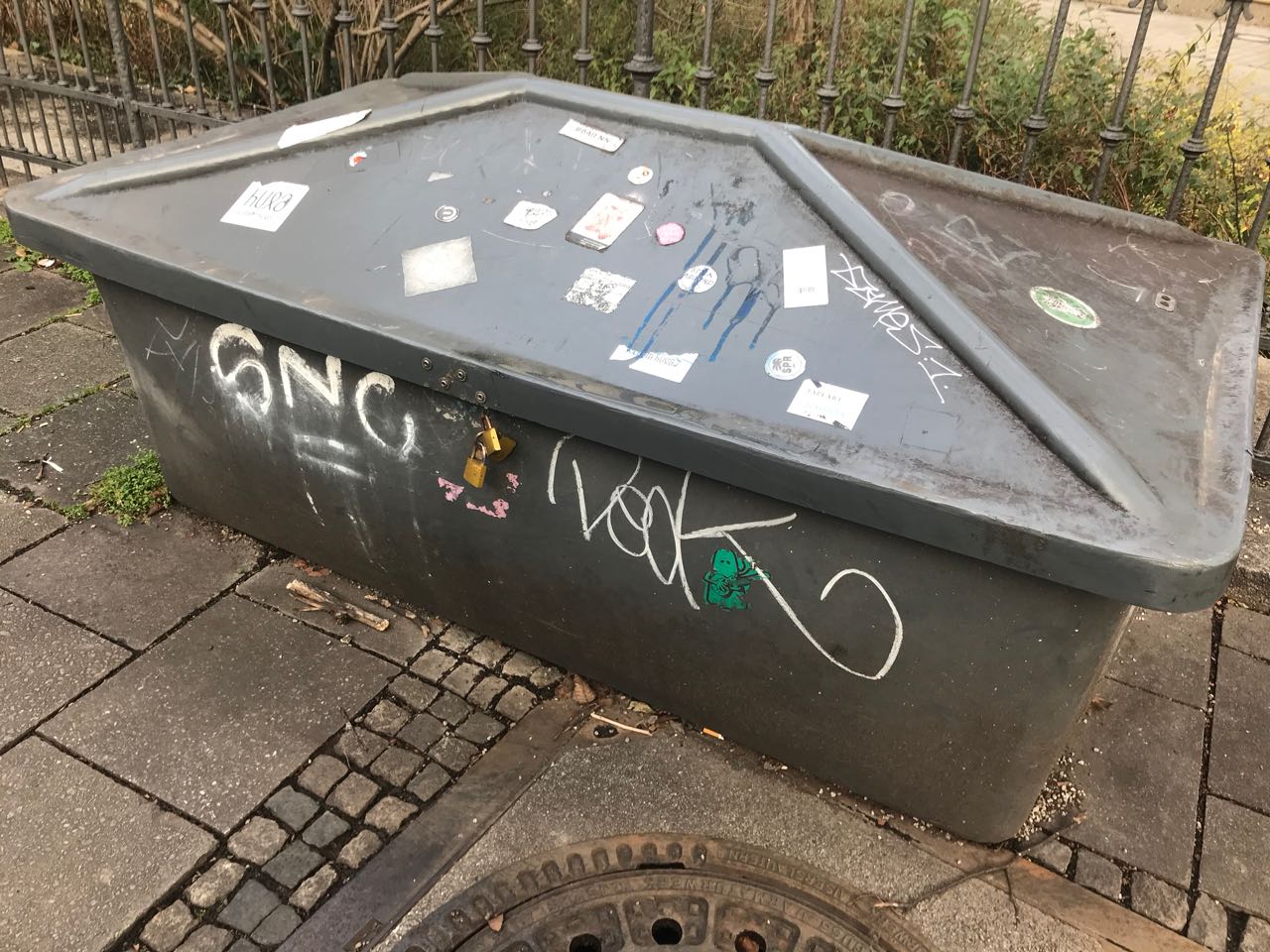 ​
There is a small detail which should attract your attention: 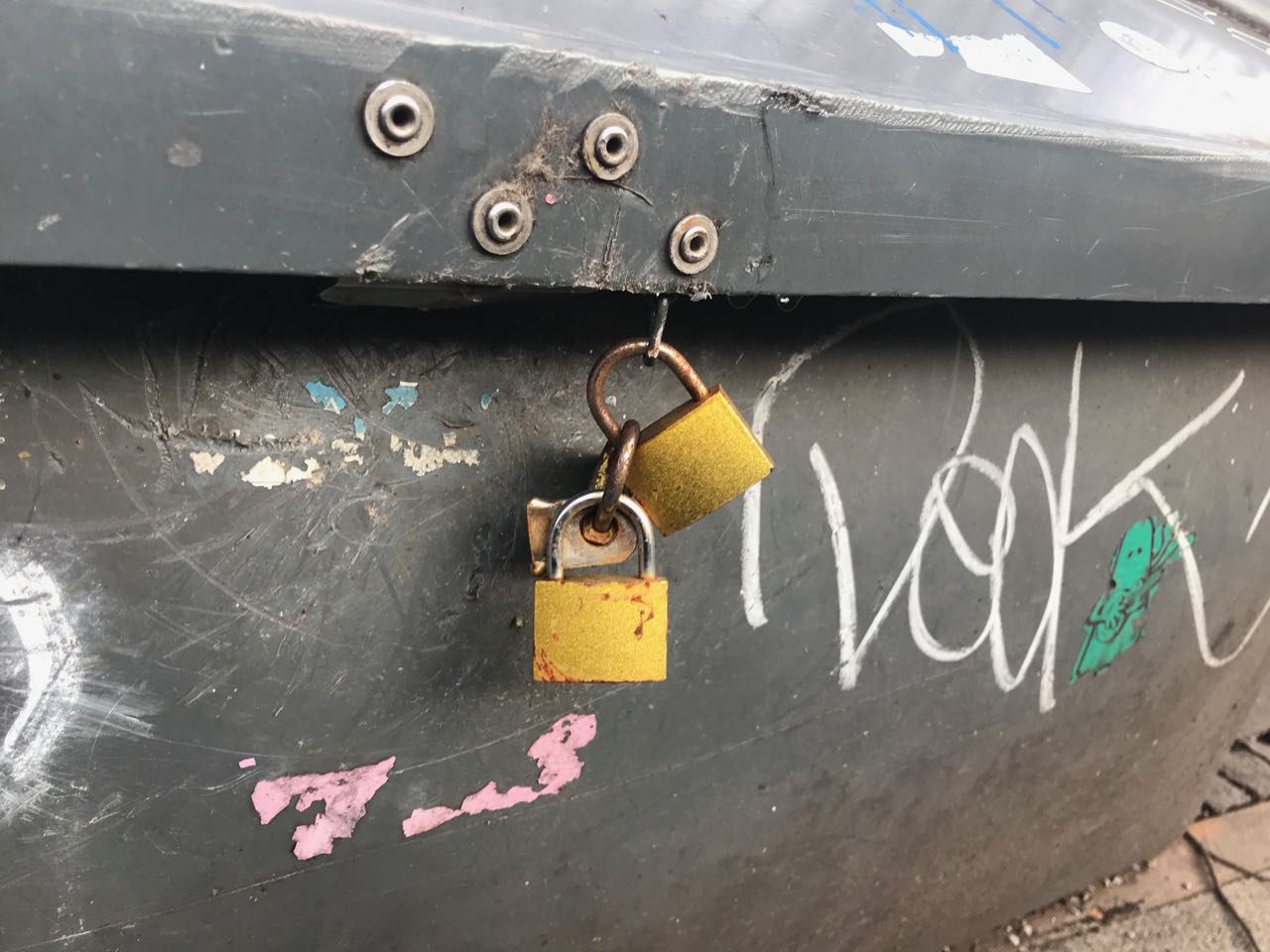 See? There are 3 padlocks and a now broken padlock ring. Why is that so?


The reason is that a large box is quite attractive to the homeless. They leave their stuff in the box in summer. They see the box, they declare it is theirs and they put a lock on it so that other homeless people cannot use it. And the reason there are 3 is not because one bloke felt generous to another 2, but because a party of 3 is more able to defend the place against others.

In winter, city personal broke the ring and empty the box of what was in it, leaving just the grit. They built that box there for a reason and that reason is not free storage. 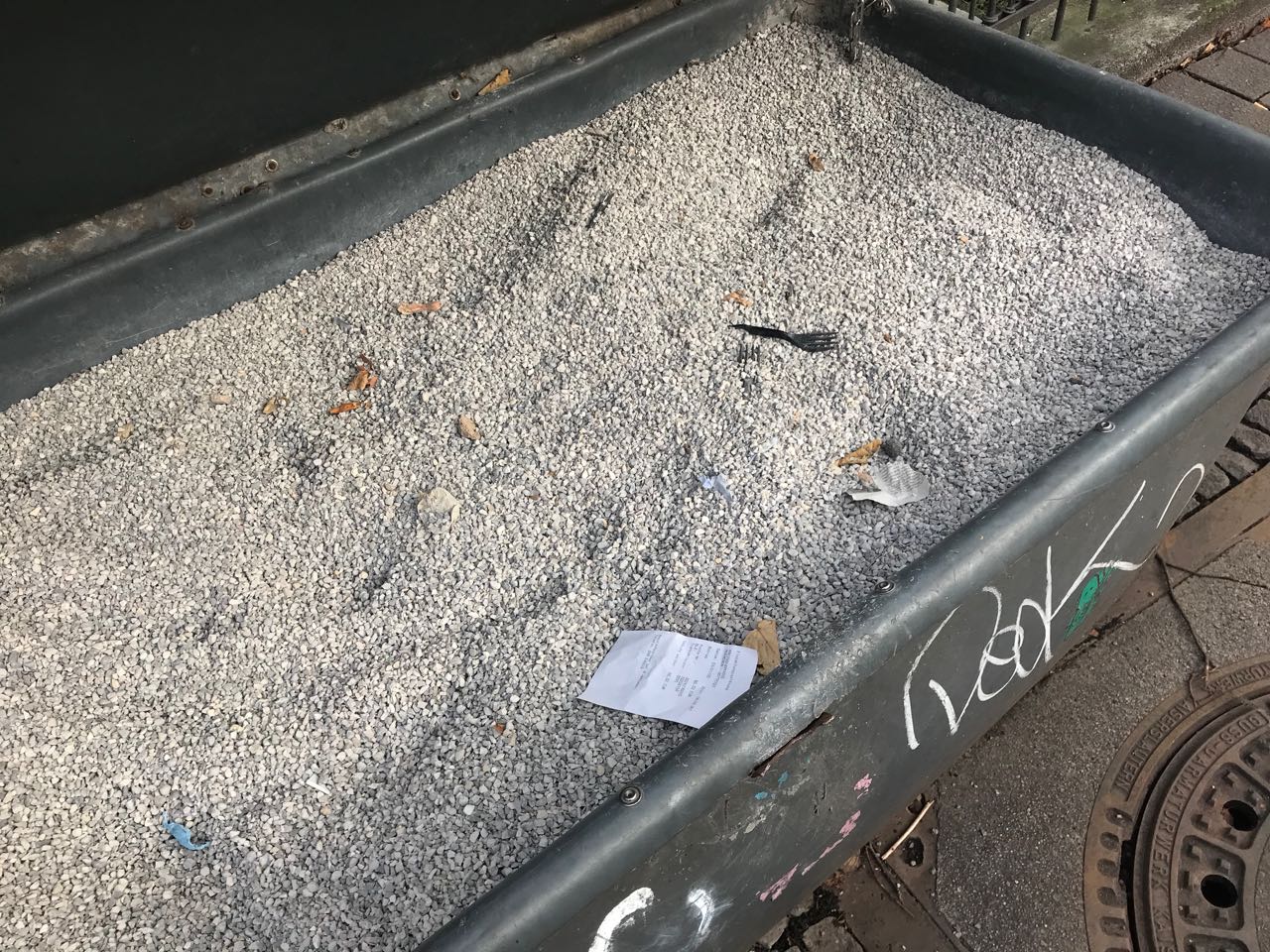 ​
That grit is pretty dirty, BTW. It is re-used year after year (the city vacuums the stones). So this has seen several winters on the street where dogs... and sometimes homeless pee and shit. Munich has public toilets, but they close at night. What did you expect?

When I was doing my PH.D. In Boston, I would drive to Copley Square and collect homeless freezing young men in my car, feed them in my apartment, give them coats, jackets sweaters and scarves and then return them.

Now I look back, folk would think I am some weirdo and foolhardy. To me, I had food and extra clothes and although very minor, I should do a little to ease their discomfort.

I felt better than just giving the clothes to a thrift store as this way no money exchanged hands.

Giving is complicated and not simply a proof of good character, kindness or generosity, as it benefits both! But it’s a social exchange that’s positive.

But a socialist might come to the house and justifiably demand that 4 poor families be allowed in to stay there as their legal homes too!

After all, that’s the kind of change made Zhivago a fabulous movie!

As a movie, it amazing, for one’s own home, not so much!

I just read today that our local private non-profit hospital, Cedars Sinai Medical Center, in Beverly Hills has upped its cut of line for totally free treatment from 200% of the Federal Poverty Standard of just under $13,000 per year to 400%.

That means a lot of the homeless could get treated for free if they happened to be in the neighborhood.

But how would they ever know?

Asher Kelman said:
But how would they ever know?
Click to expand...

Somebody could tell them?

In this context of hostile architecture, I would like to point out that amusing project by Sarah Ross: