We heard that Pollo Campero (El Salvador’s answer to KFC) was putting on a fireworks display tonight at the football stadium. Unfortunately the city we live in is very flat with no elevated vantage points. So unless we managed to get into the packed stadium or city blocks surrounding it —- there was not likely to be any views around the city.

So I decided instead to head up the 6 blocks to the end of our street, and use Live Composite to catch some traffic at the intersection (including knowing that my long exposure would all all three colours to show up on the traffic lights) —— and just maybe the fireworks half a mile away downtown - would be high enough to clear all the trees and buildings.

Here is a selection of the captures I got shooting between electric wires crossing the streets, at around 300mm equivalent lens. I soon realized that far more interesting images were created when I used my old time-lapse trick of holding my hand over the lens to block light until I saw exactly what I wanted in the sky. I have also used this trick in Live Composite Mode, to block white car lights coming at me while uncovering the lens as cars passed by with their red tail lights showing. It worked really well. 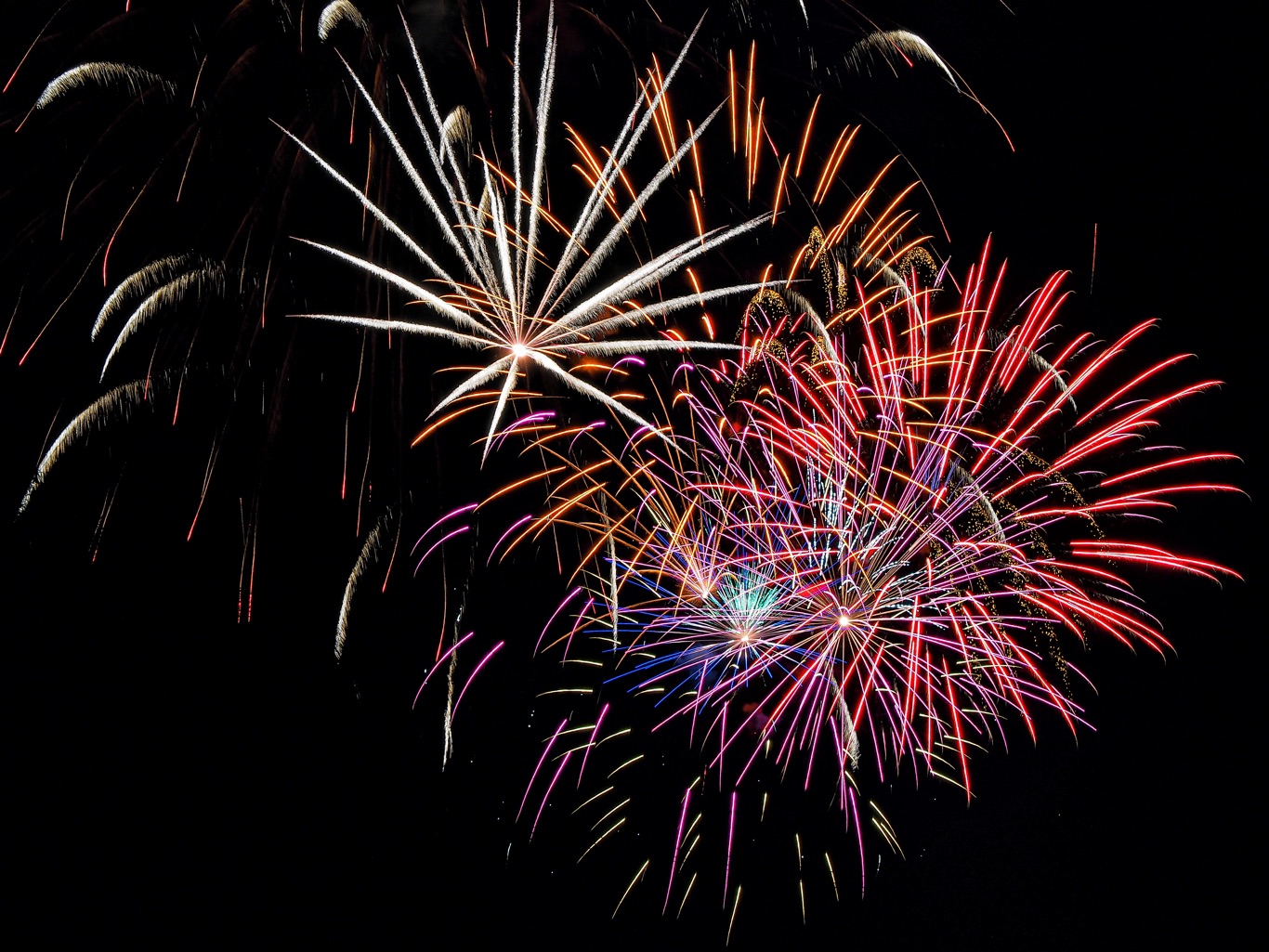 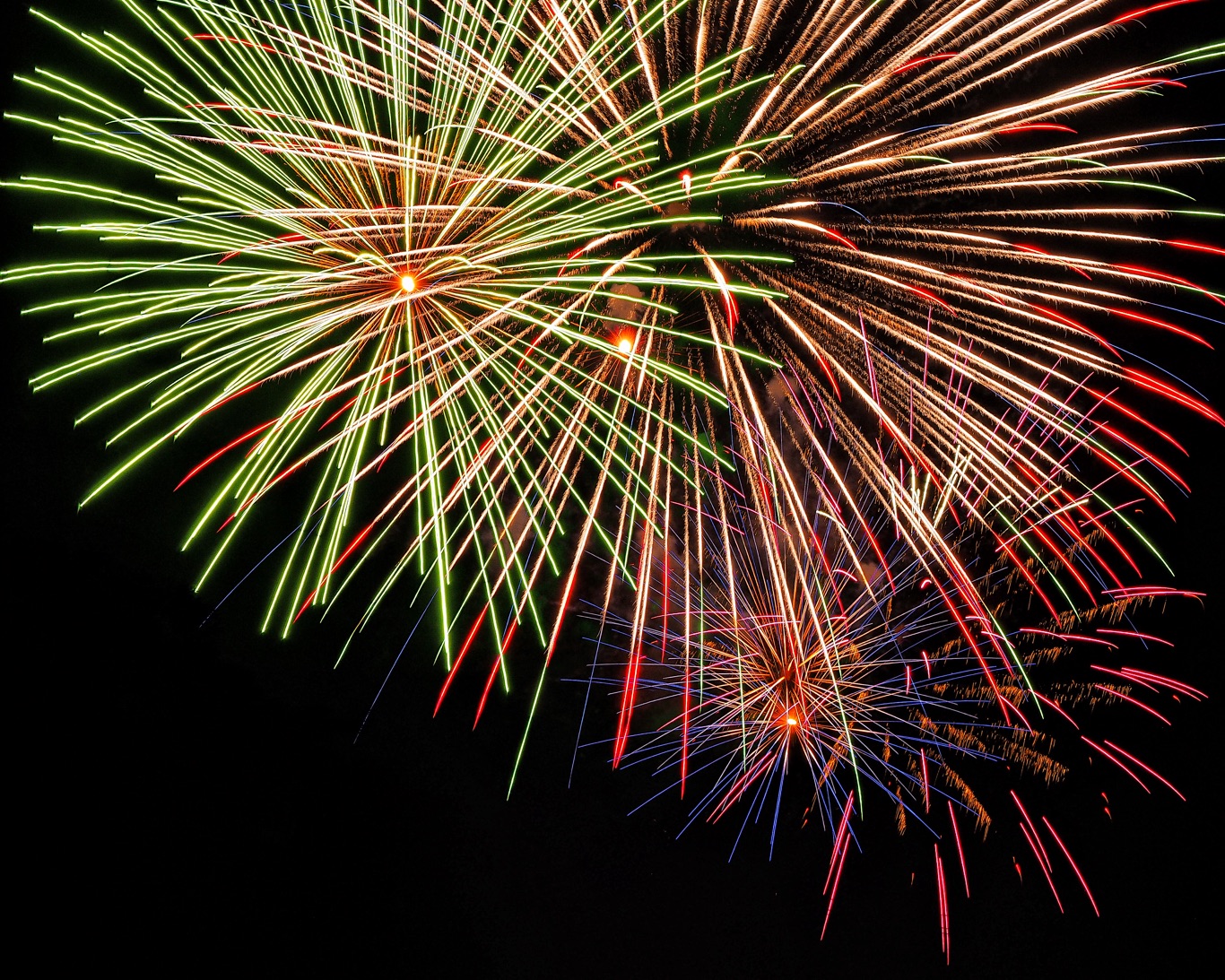 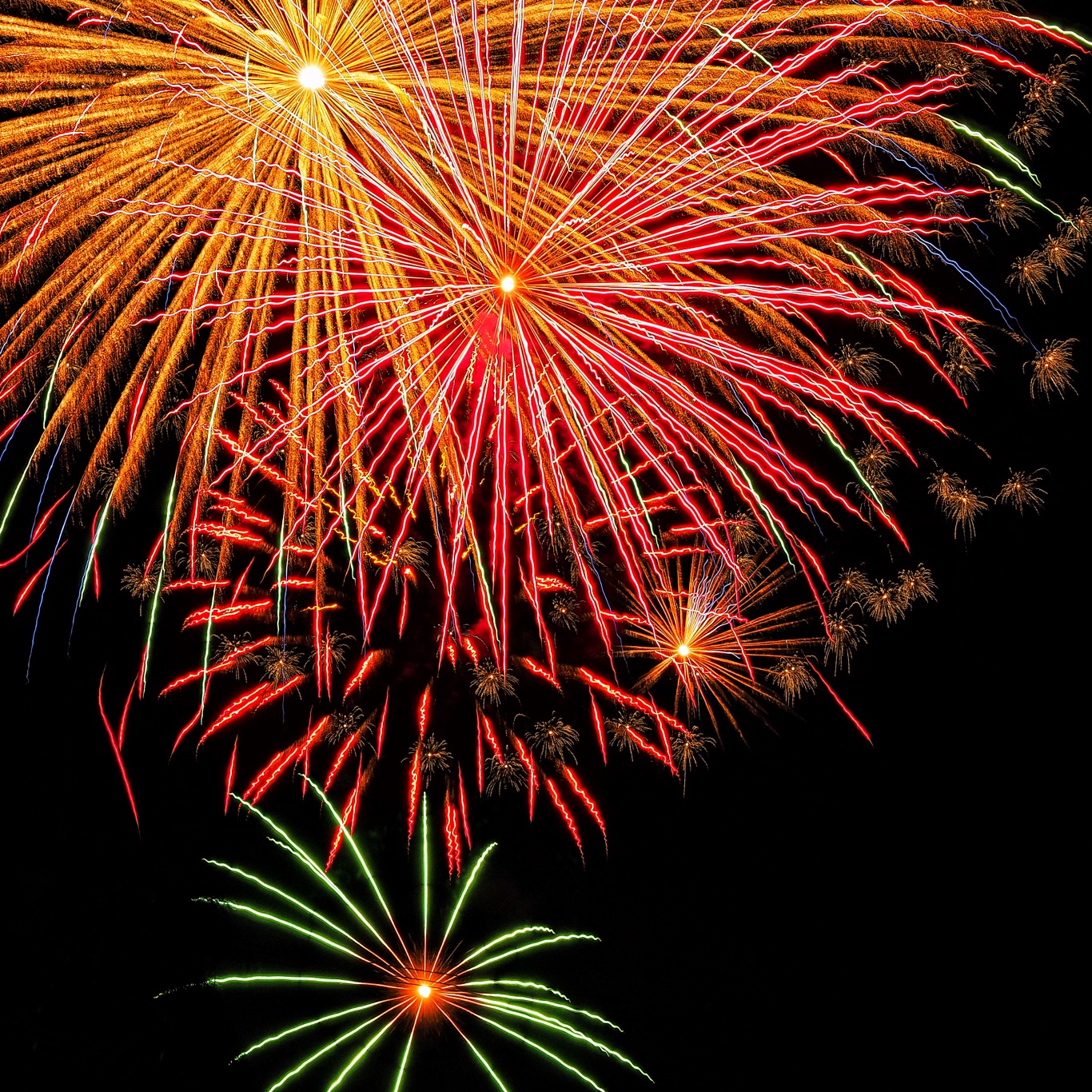 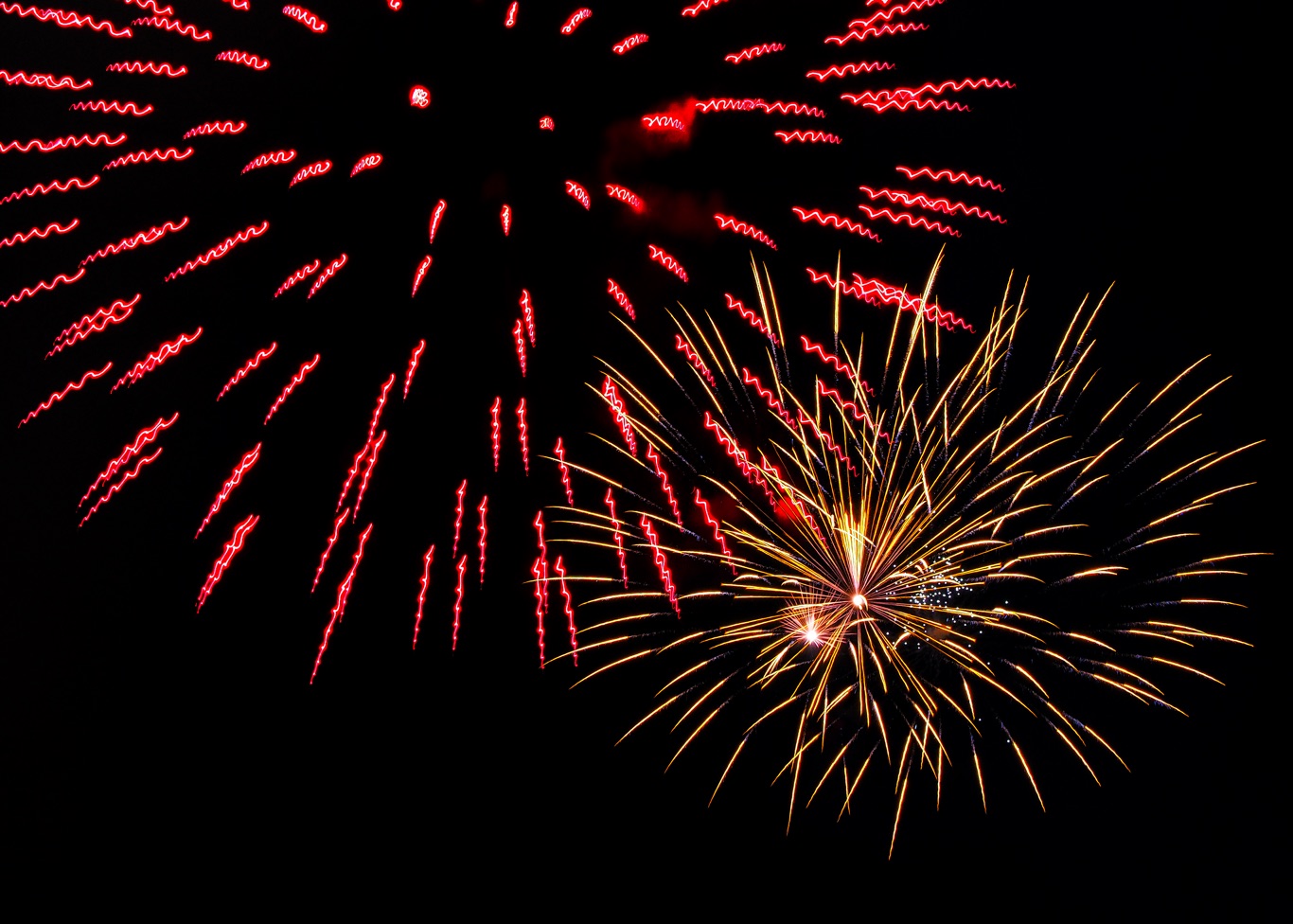 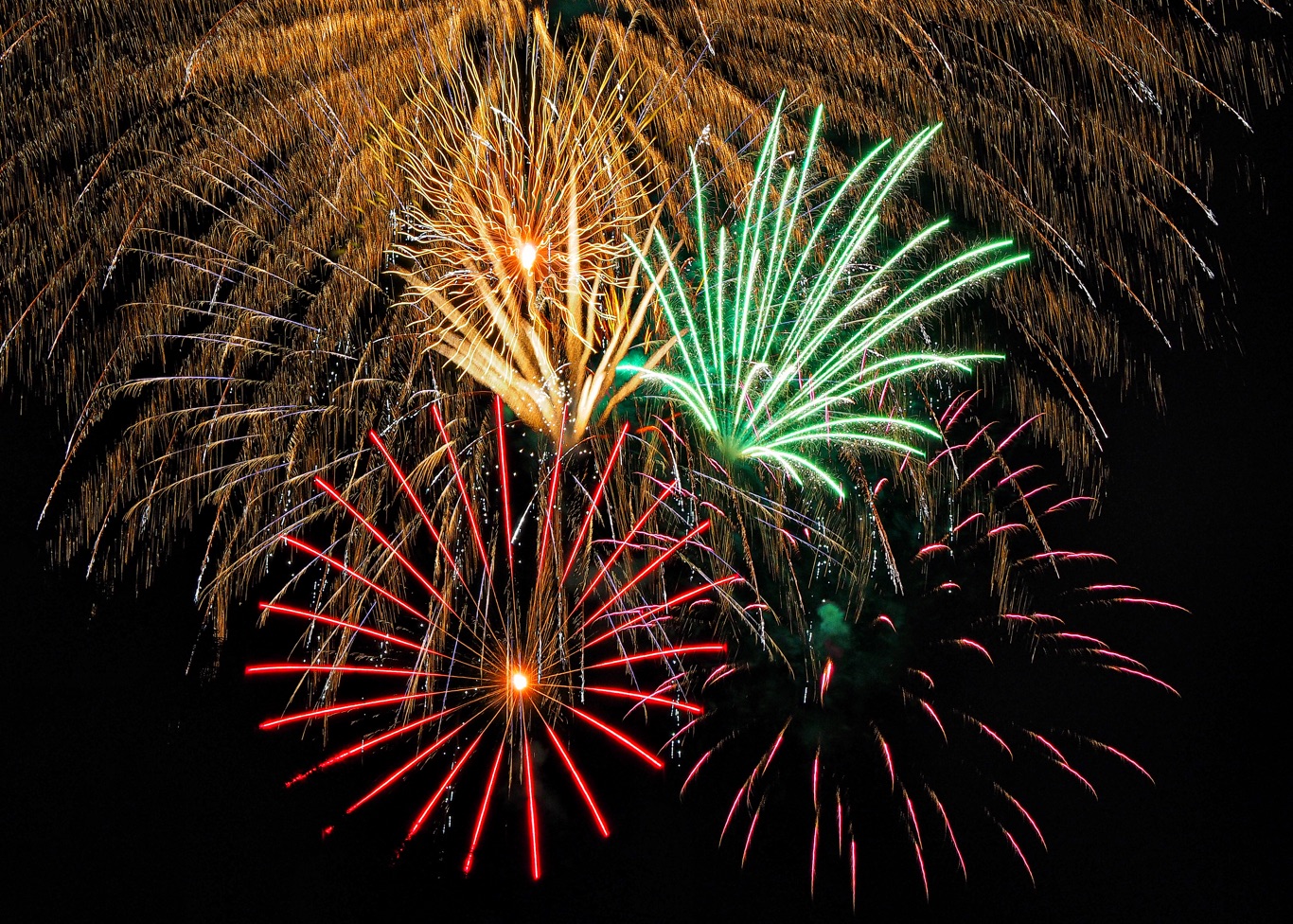 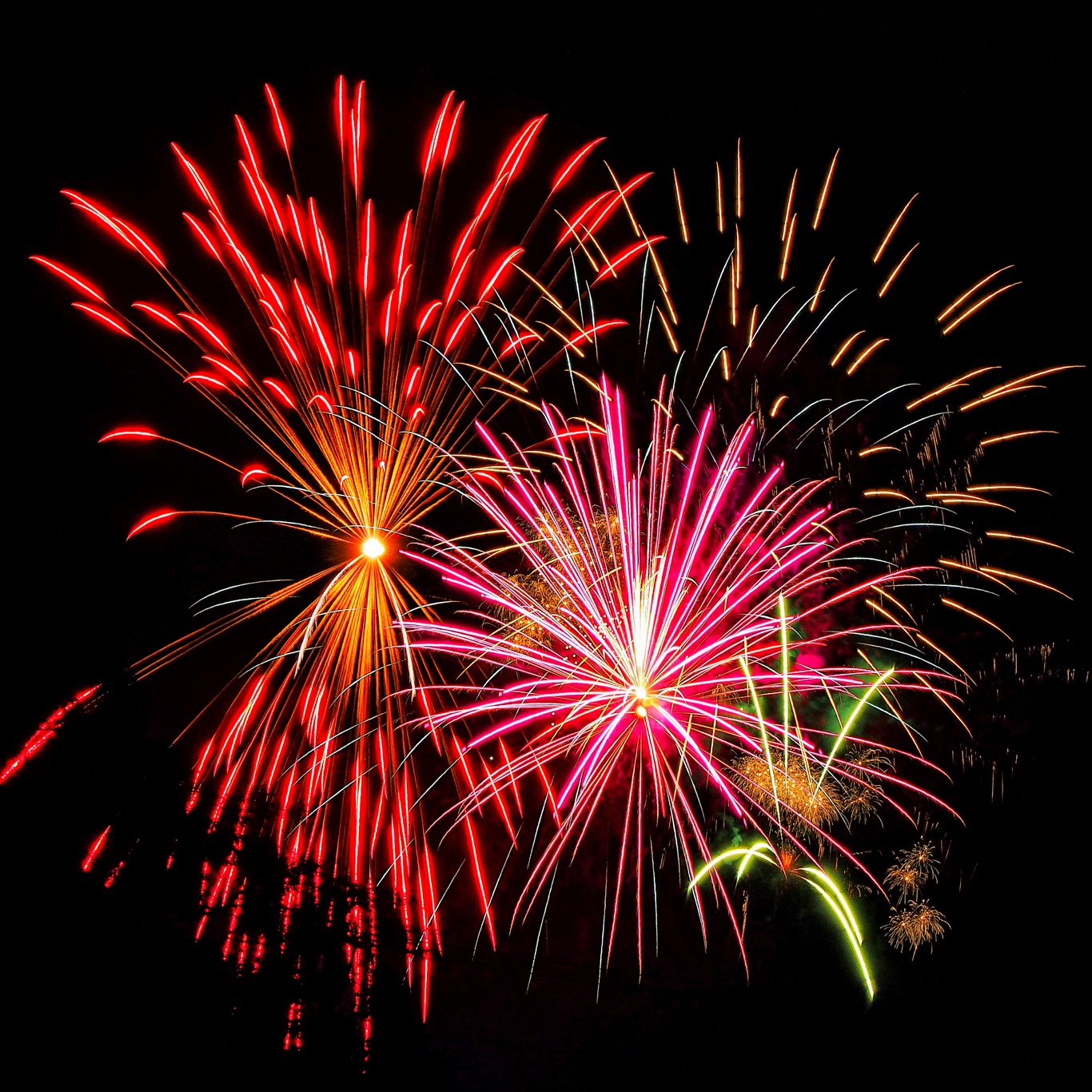 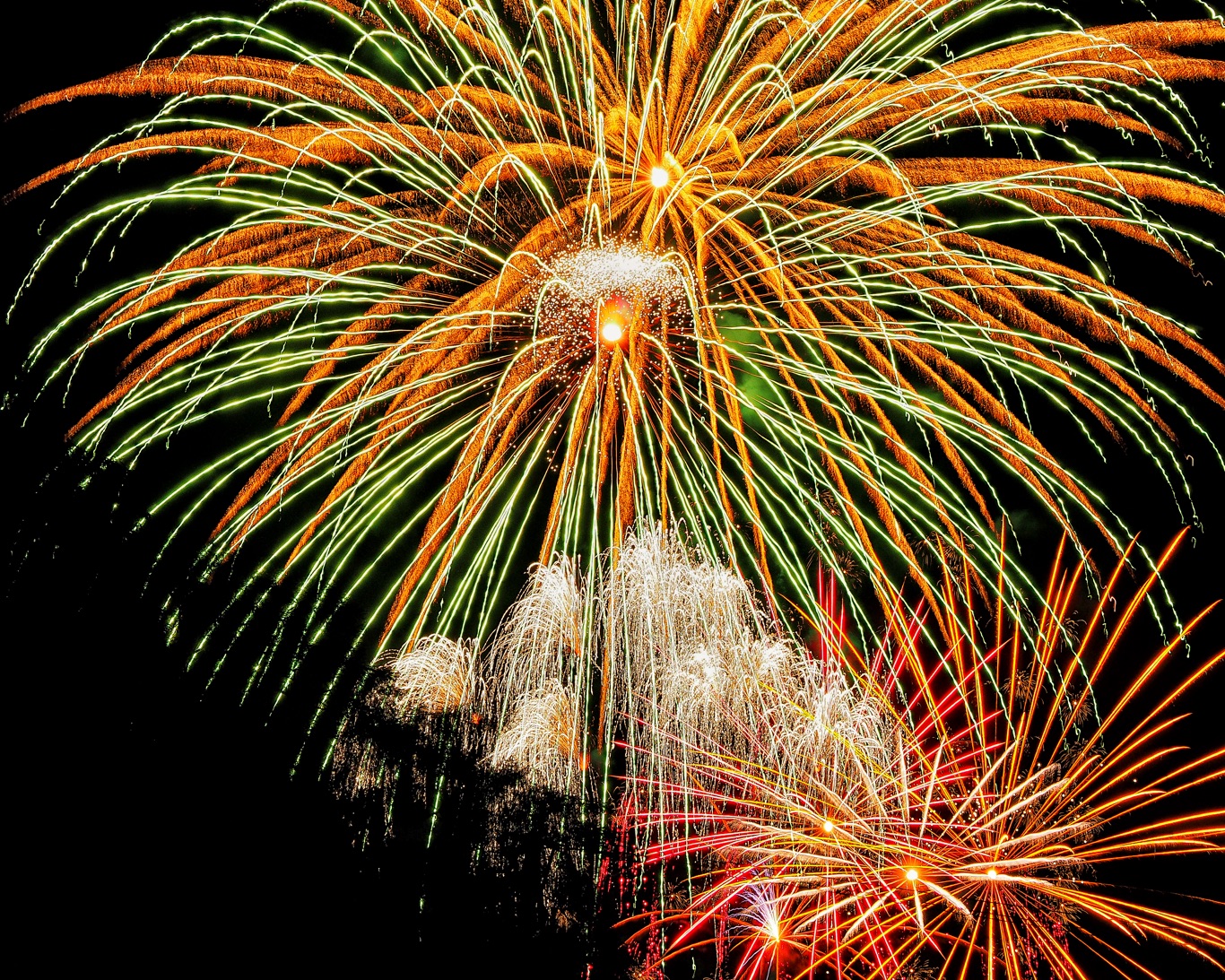 Unfortunately my idea of having the black sky behind the street intersection, filled with fireworks - didn’t work. They were so far away that they showed on the right side behind a tree - and all were concentrated in the same area. So I took some liberties when I imported the files wirelessly into my iPad, and overlaid a few of fireworks shots taken with a wider angle lens - in the SnapSeed App —- and used the mask feature to bring some fireworks into the black background. It’s not bad. 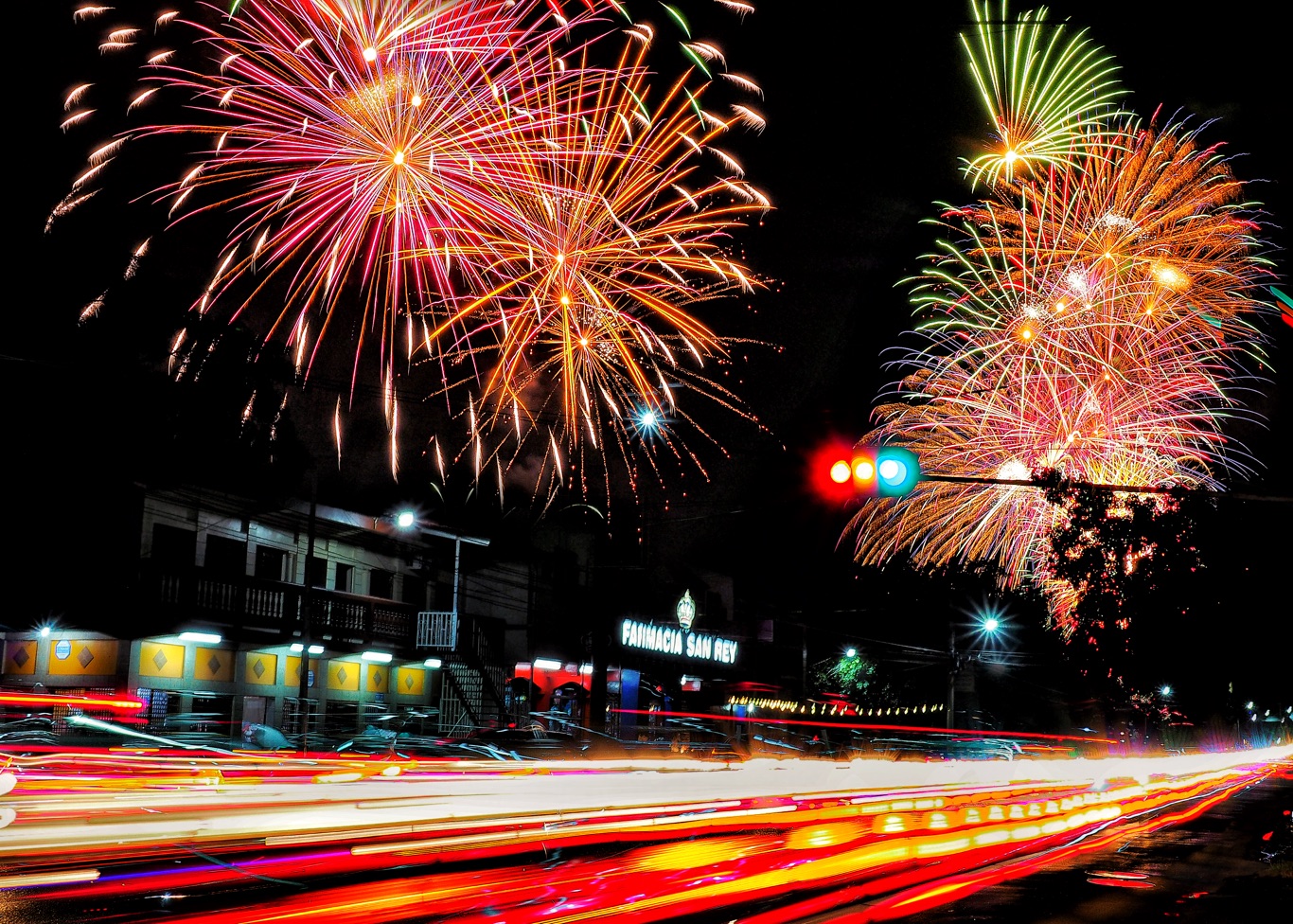 Anne grabbed this shot of me set up at the intersection taking pics tonight, with her iPhone. 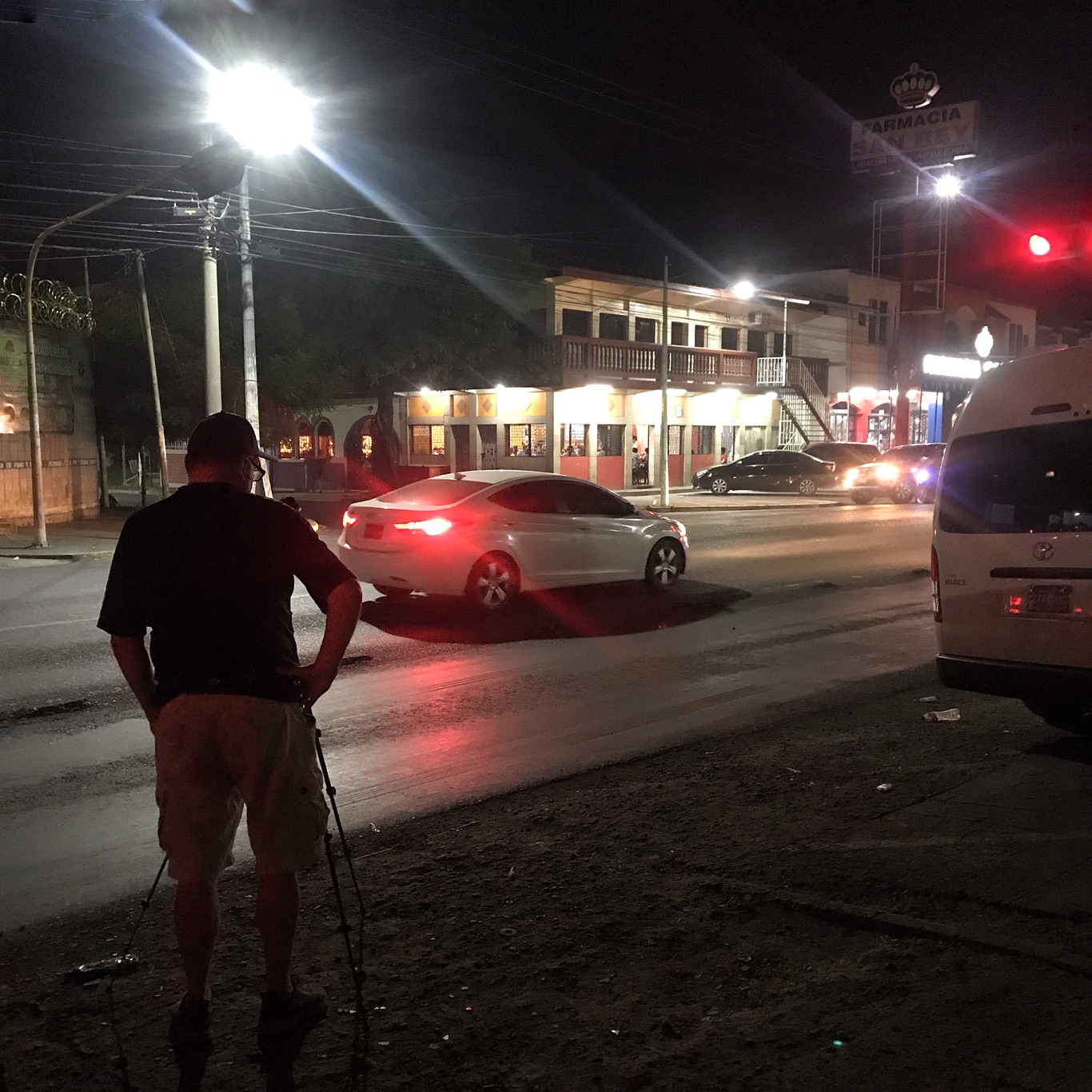 The image as processed in the YouTube video below 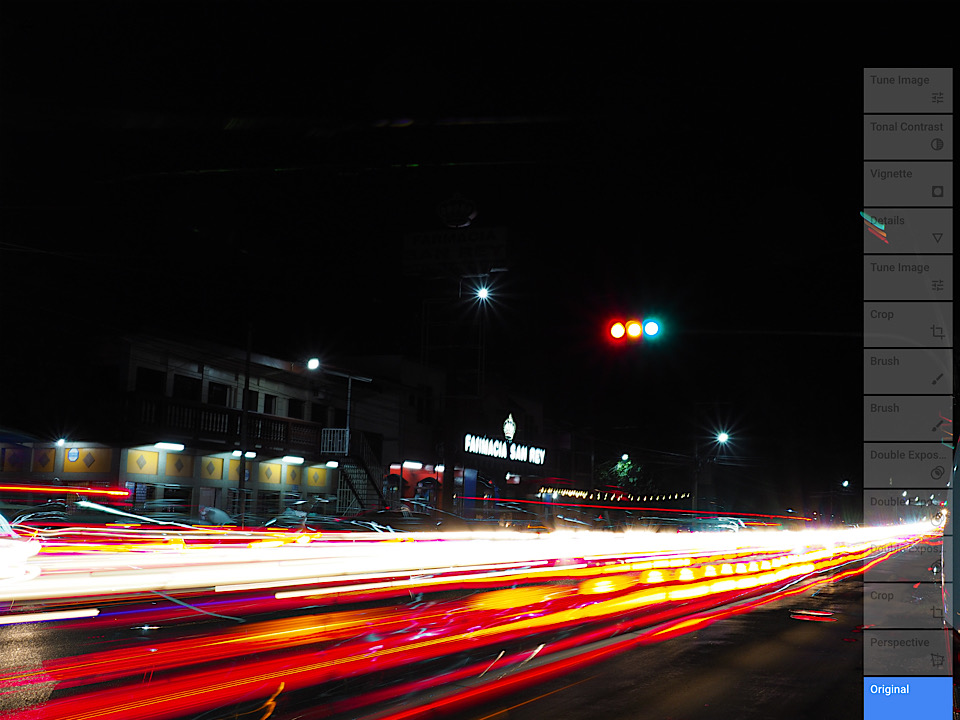 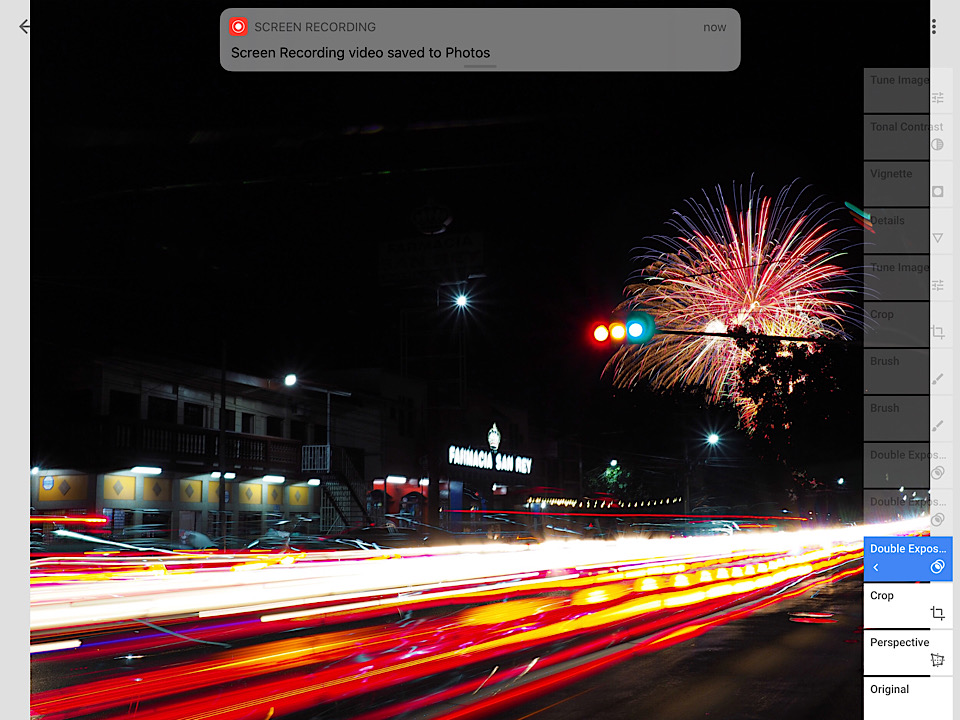 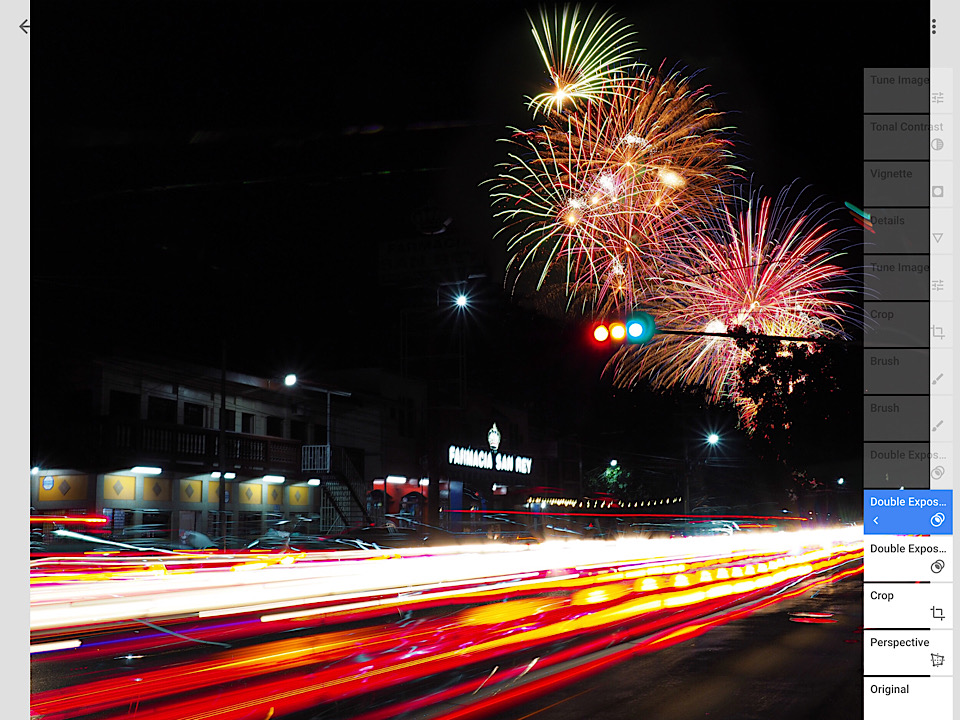 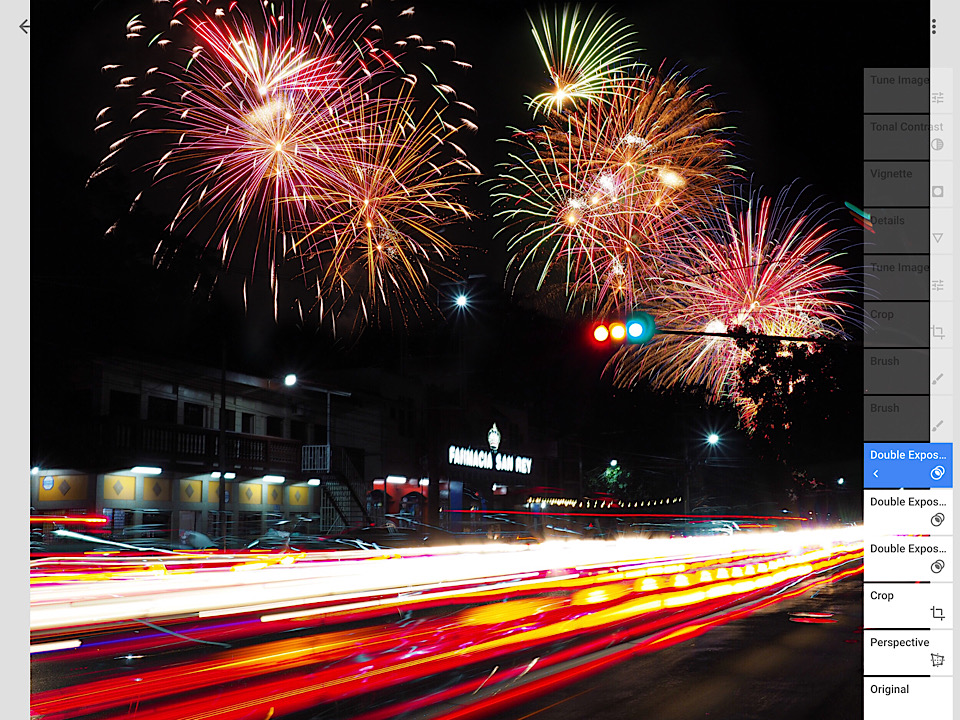 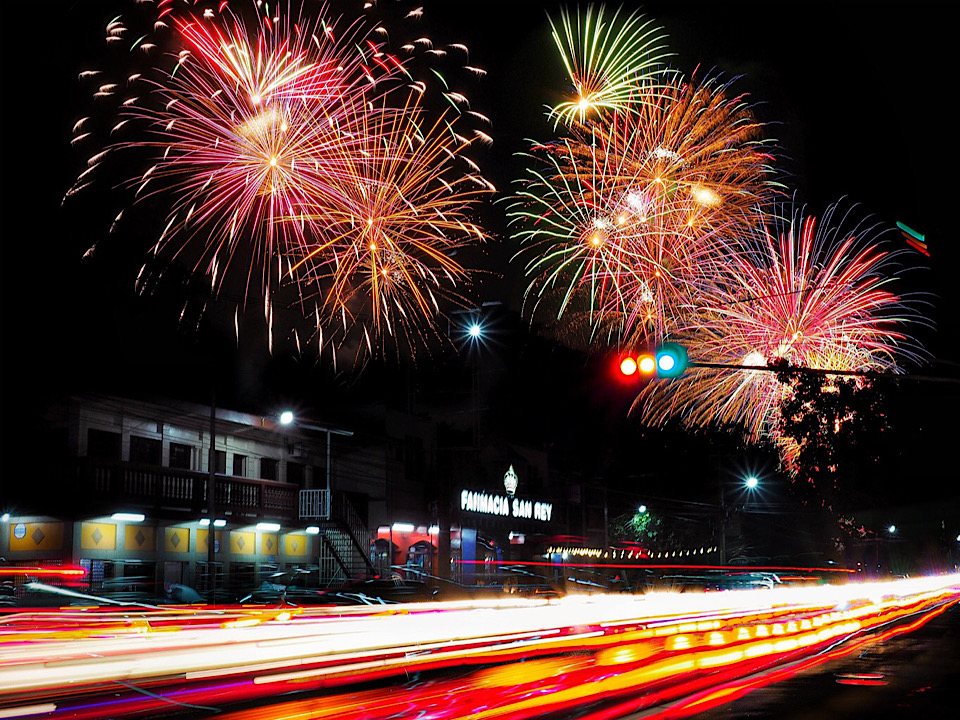 It has turned out that the Snapseed App on my iPad, is my go-to image processing application for my images that go online. Many may not be aware of the amazing features it contains - including masking ability.

with this set of fireworks images, I used Snapseed to composite 3 separate pics of fireworks, onto the black sky area of a street scene that I was shooting at the same time using a wide angle lens (11-22mm f2.8) and Live Composite mode.


this YouTube video shows the beginning to end of the process, including the use of masking - all accomplished in a few minutes in Snapseed, after wirelessly transferring the files to my iPad (Air2) from my Olympus E-M10

I am so impressed, but so far I haven’t discovered where the masking tool is to be found!

Asher Kelman said:
I am so impressed, but so far I haven’t discovered where the masking tool is to be found!

on the top right side when you have an image open, there is an Edit Stack menu item (little icon with stack of layers and arrow on top). In that menu, click “View Edits”. If you have applied a tool to the image, it will show in the layers on the right side, above the “Original” layer. Tapping on that layer, will present a pop out with 3 symbols. The middle one (a rectangle with brush) is the edit mask. Then just draw with finger on the areas where you want the tool effect to apply. When done, click arrow on top left side of the app, to return. BTW at any time, you can see the original pic, by pressing down on the image.

“Paul of Tarsus” moment, (in the image editing realm of life), so to speak!

(Sorry “James of Jerusalem”, in the very deep world of Bible study, so worry-not, if this is too obscure for you)!

Of course masking is used heavily when I am using Photoshop —— but greatly valued in Snapseed, being that for a majority of my photography, there is no real need for me to use Photoshop anymore - or for that matter, to use my MacBook for processing my files.

An example of Snapshot masking, was with a shot of the full moon that I took last night. I was able to apply sharpening and other subtle tonal enhancements broadly to the whole image - and then using masking to apply that only to specific areas where it benefitted, keeping the effects off of the edge of the moon and smooth areas. Really convenient. 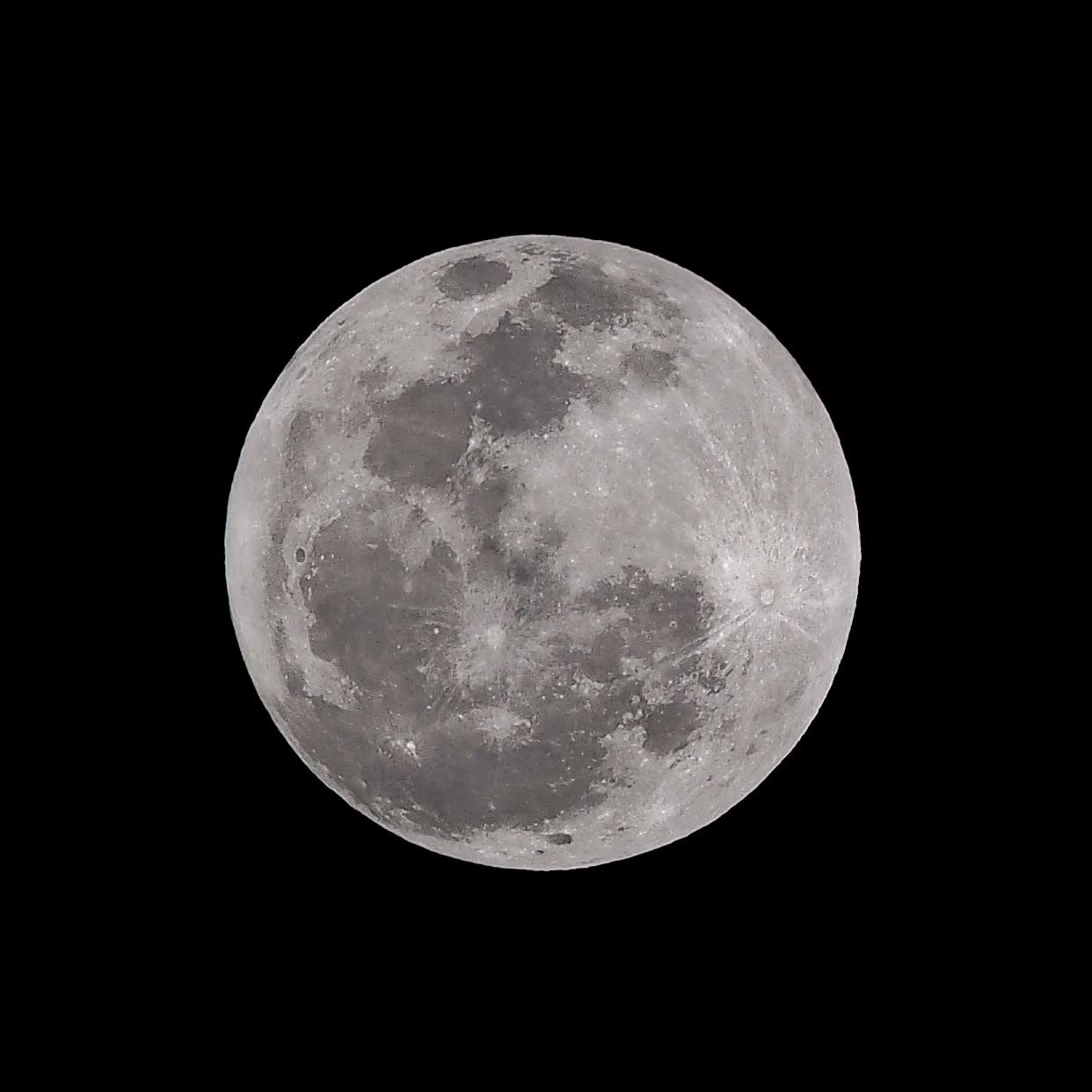 That is an achievement! A picture handheld like that is a tribute to both Olympus and your skill!