Challenge for Pictures in a Series: Motif or Concept Call for Trains, Stations and Railway Gear!

This is the Iron Horse that opened up continents!


I have not many of these but I am fascinated by their power, their use by princes and presidents, in trade, war and for vacations.

Here in Vernon, this train delivers fuel to the factories. 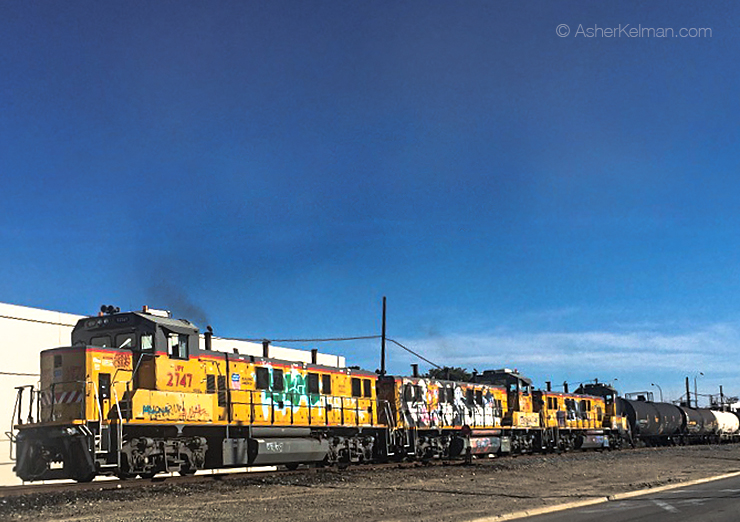 India. Inside a train 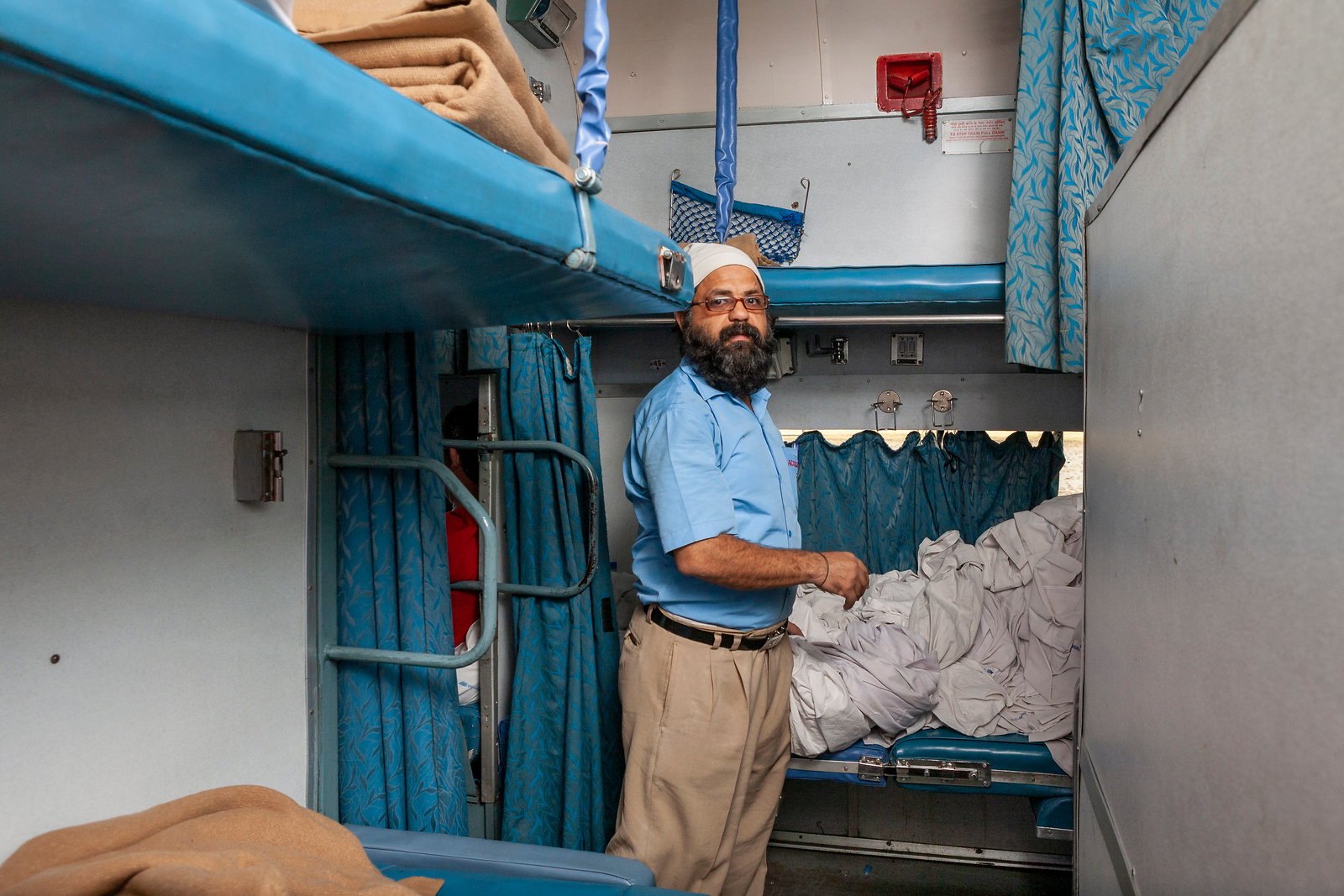 But Antonio, how come you are in his apartment?

But Asher... this is inside a train. I do not understand what you mean.
Ten years ago ! 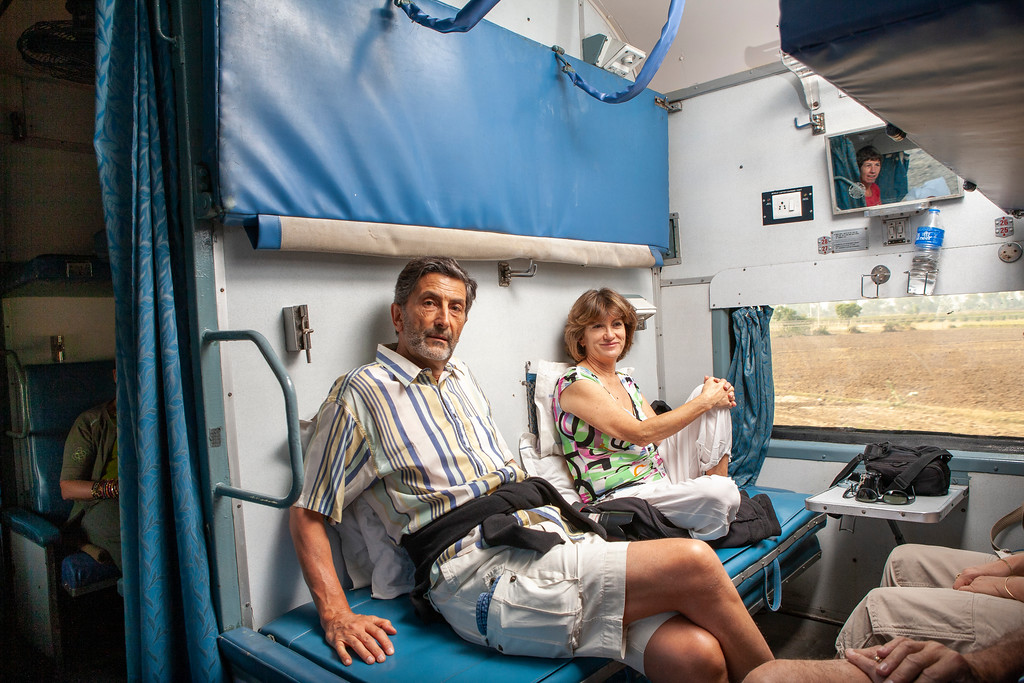 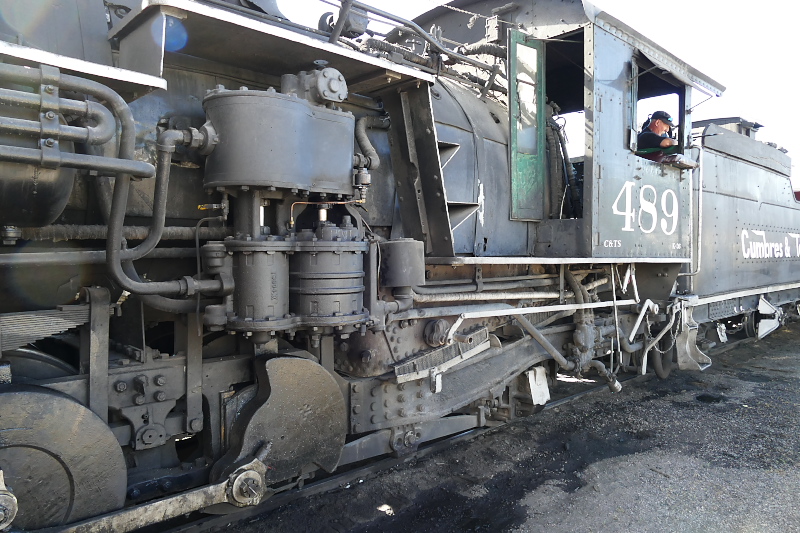 Here is an old Scottish telephone engineer (hint: not Alexander Graham Bell) at the locomotive steps: 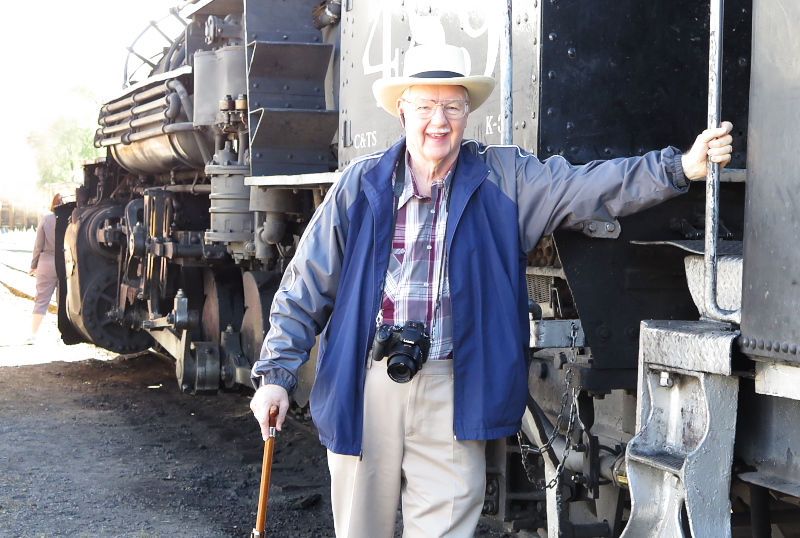 Carla C. Kerr: Nope, I think I'll let him drive
​
Here Carla is about to board our car: 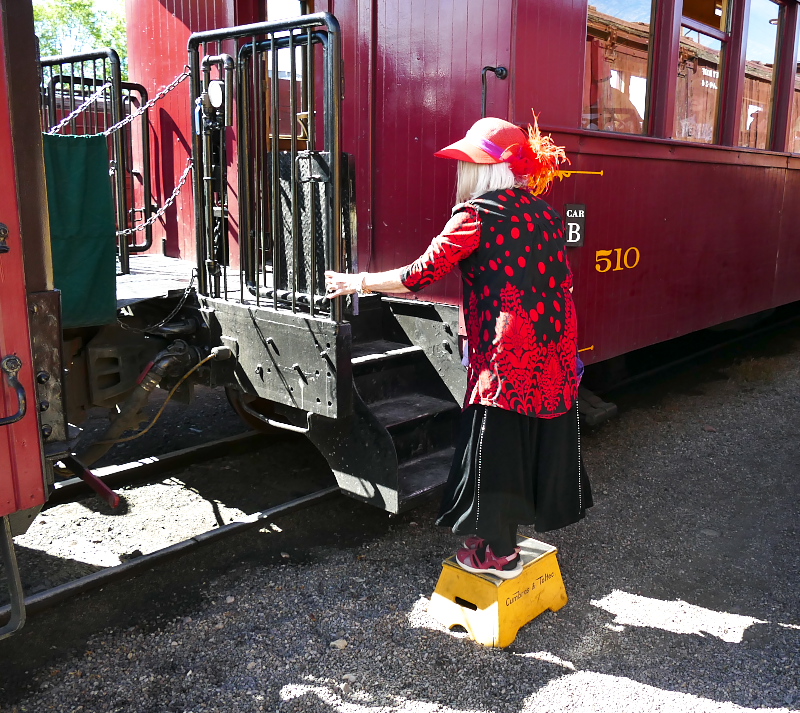 Douglas A. Kerr: Carla boards​
It was a wonderful adventure.

This (not my shot) is most of the trackwork of CP (control point) Roosevelt on the southern approach to Chicago Union Station. It comprises complex switchwork mainly devoted to allowing an inbound or outbound train to move from one track to another among the six main tracks. 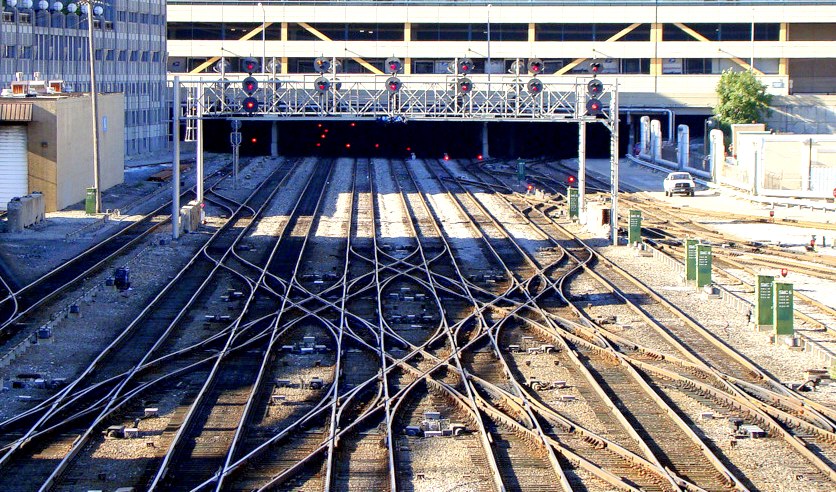 CP Roosevelt, approaching Chicago Union Station from the south​
The first signal gantry we see ahead is the beginning of the next control point, CP Taylor. Its switchwork allows movement of trains from the outermost of those six tracks to three other tracks off to both sides.

No train is approaching from the south, and all signals are at stop (all heads on the signal being red). ("If its not all red, its not red at all.")

But Antonio, how come you are in his apartment?

Don’t you get your own apartment in the train?

Don’t you have a bed?

Antonio Correia said:
But Asher... this is inside a train. I do not understand what you mean.
Ten years ago !
Click to expand...

I thought it was your private suite!

What a handsome couple you are! You look like Indiana Jones, ready to discover lost civilizations and major treasures! ​
Not only technically marvelous, but the patterns made by the rails are impressive!

I would love the original to study!

The valve gear of a steam locomotive is responsible for admitting the pressurized steam into one end of the cylinder or the other with the right timing to cause the driving wheels to rotate continuously. More subtly, the valve gear does this in such a way that steam is only admitted during part of the stroke of the piston, the force during the reminder of the stroke coming from the expansion of the steam.

The design of mechanisms to manage the steam admission (and the matching matter of its exhaust) was over the years a rich adventure of inventors. The valve gear that ultimately came into widest use was invented in 1844 by the Belgian engineer Egide Walschaerts. Not surprisingly, it is called the "Walschaerts valve gear" (or sometimes, inexplicably, the "Walschaert valve gear").

We see a lovely example here:

On the right, over the two leading truck wheels, we see to large cylindrical items., The lower is the steam cylinder itself, inside of which travels the piston; the upper contains a "spool" valve, which admits steam to, or exhausts steam from, one end of the cylinder or the other.

The various smaller links and levers are part of the Walschaerts valve gear, the fascinating details of whose operation I will spare you.

It is a wondrous thing.

How fast did these cylinders wear out?

Antonio Correia said:
But Asher... this is inside a train. I do not understand what you mean.
Ten years ago !

Is this a train in India we see with hundred of folk clinging to thevoutsidexandcon the carriage roofs?


Asher Kelman said:
How fast did these cylinders wear out?
Click to expand...

I'm not sure. I do know that the major railroads had large shops in which, for example, the cylinder and valve bores were rebored and new pistons made, with diameters to match the new bore diameter of the cylinders. But I have no idea after, say, how many miles of service that typically had to be done.

In that vein, the Cumbres & Toltec Scenic Railroad (as for many other "historic" railroads) also has a large shop, in great part manned by volunteers, in which the locomotives and cars they acquire are restored. The parts they need, if not obtainable by cannibalization of other units, have to be made from scratch, a daunting task especially for the larger parts (driving wheels, for example). Some of the skilled volunteers are old-time railroad workers, but others have learned the many crafts needed from the old timers.

There is extensive information on the internet as to what has become of the various "litters" of locomotives of ccertain types that were originally built, bespoke by various railroads (many no longer in operatiion). For example, for the "litter" that includes the present Cumbres & Toltec 489, one of its sisters ended its life when, though some inadvertence not yet known to me, it came off the turntable at a certain engine house and tumbled into the turntable pit!

I do have a few. Starting with a repost. 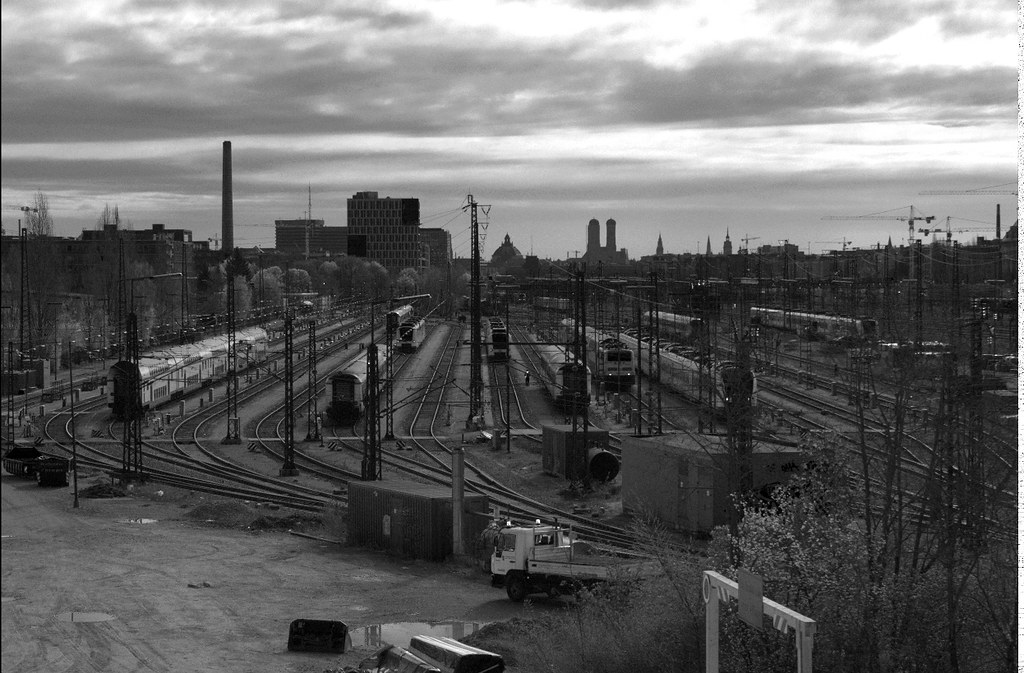 Rails and the City
​

People waiting for the commuter train: 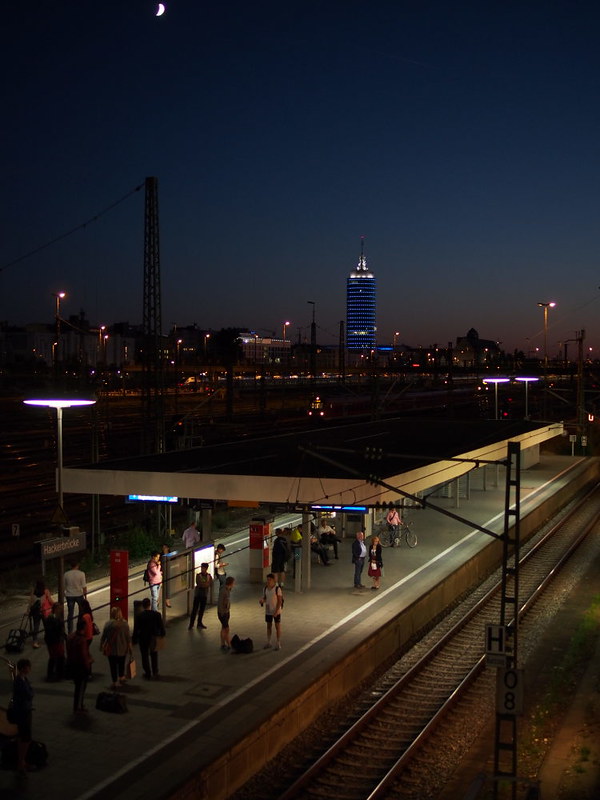 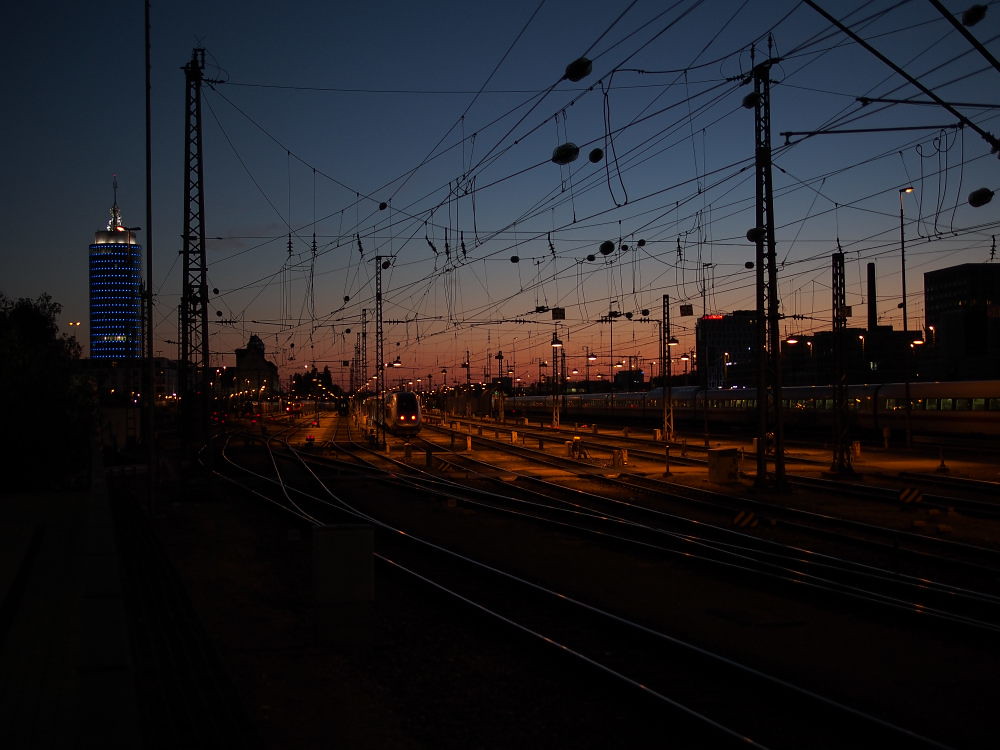 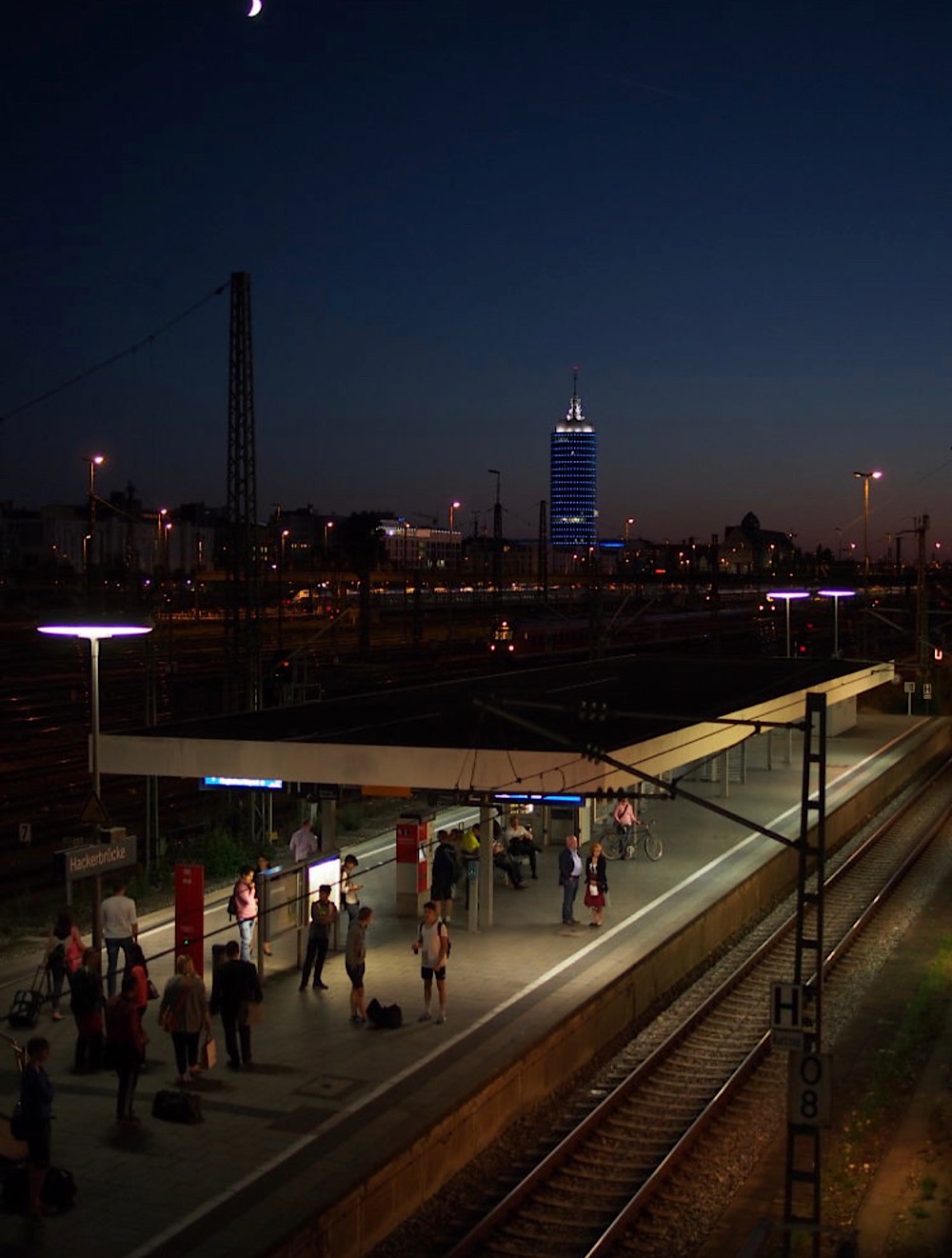 This picture exemplifies the benefits of our mechanized society and a relatively safe place with potential opportunities to meet strangers. How many of us take advantage of the waiting time to actually speak to another person?

Most folk we meet are in fact good and pose no risk to us. But I guess we still have a little reticence in opening up to strangers on a commuter train or the train station!

On a cruise, the inhibition is much less.

But looking down on your picture from above, almost like having a telescope from heaven, we feel goodness, tranquility, and ideal society and benevolence!

I like this picture as positive and so uplifting!


Michael Nagel said:
I do have a few. Starting with a repost.
Click to expand...

Rails and the City
​
Lovely restful shot of a nice ladder track.

The clutter of the overhead might seem an intrusion or distraction to some, but to me it is a powerful artistic element.

Hackerbrücke - S-Bahn abends​
Lovely! It is the kind of scene to which an "illustrator" might be drawn, but this phtographic rendering is jut wonderful! 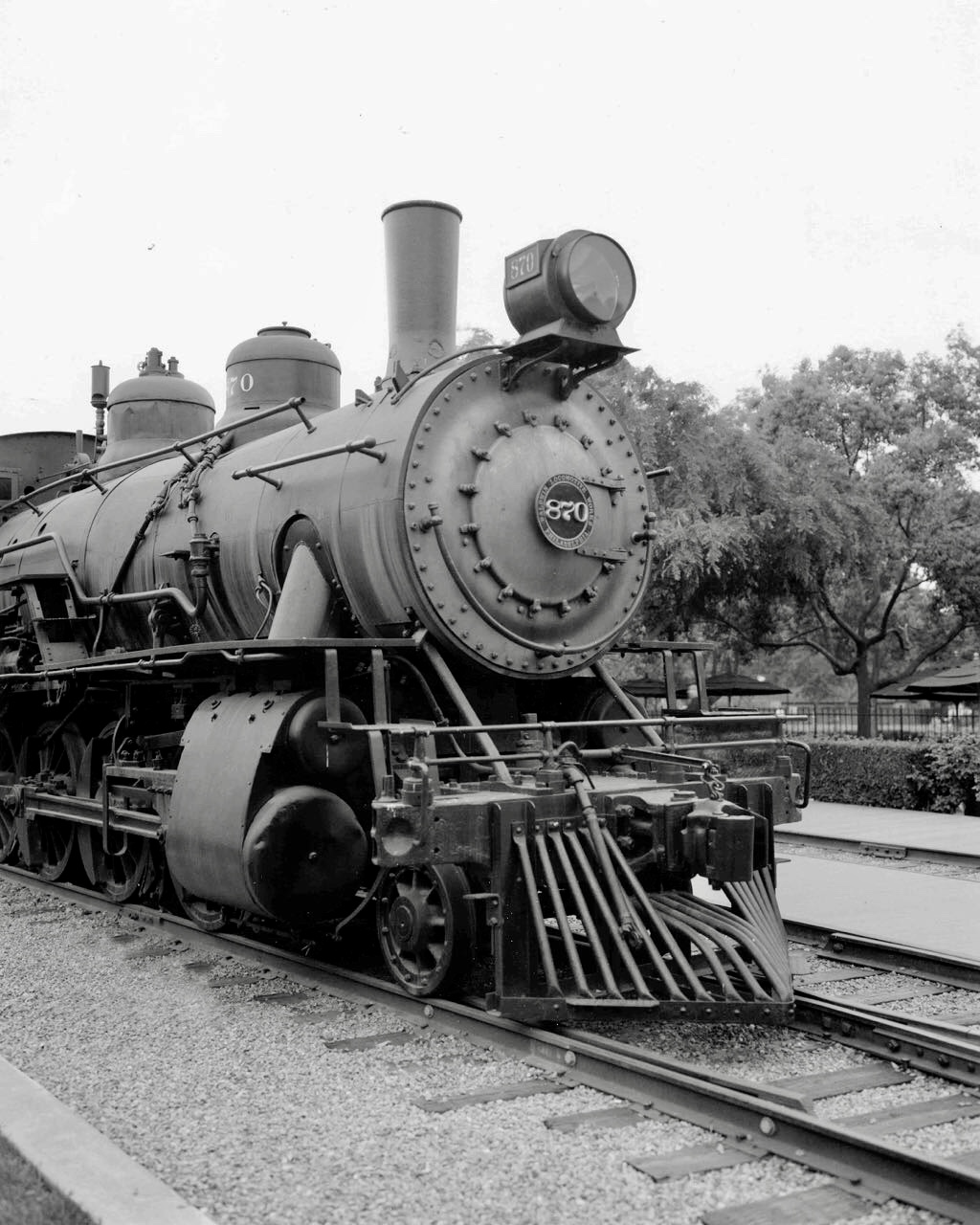 Will, do we know it’s provenance?

It looks like the former AT&SF No. 970 (a 2-8-0 "Pacific" type). It was originally the St. Louis, Rocky Mountain, & Pacific No. 101. I think this now resides in Heritage Park in Santa Fe Springs, California. I think at one time it operated,and later resided in retirement, near the (once) ghost town of Madrid, N.M.

Both these towns are of considerable significance to Will.

That thread was a favorite. I thought I recognized the locomotive and took a damn good pano of the entire magnificent train!

So thanks for solving that puzzle for me!

This one is a repost from years ago: 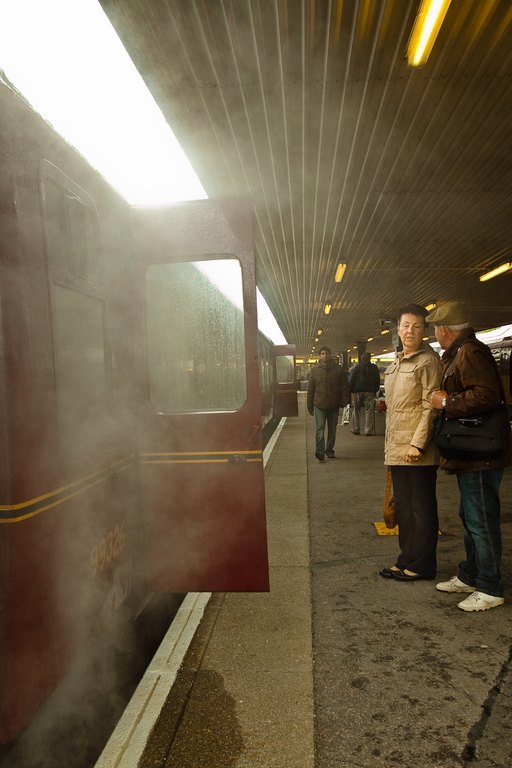 This, too, is an old one but very meaningful to me: 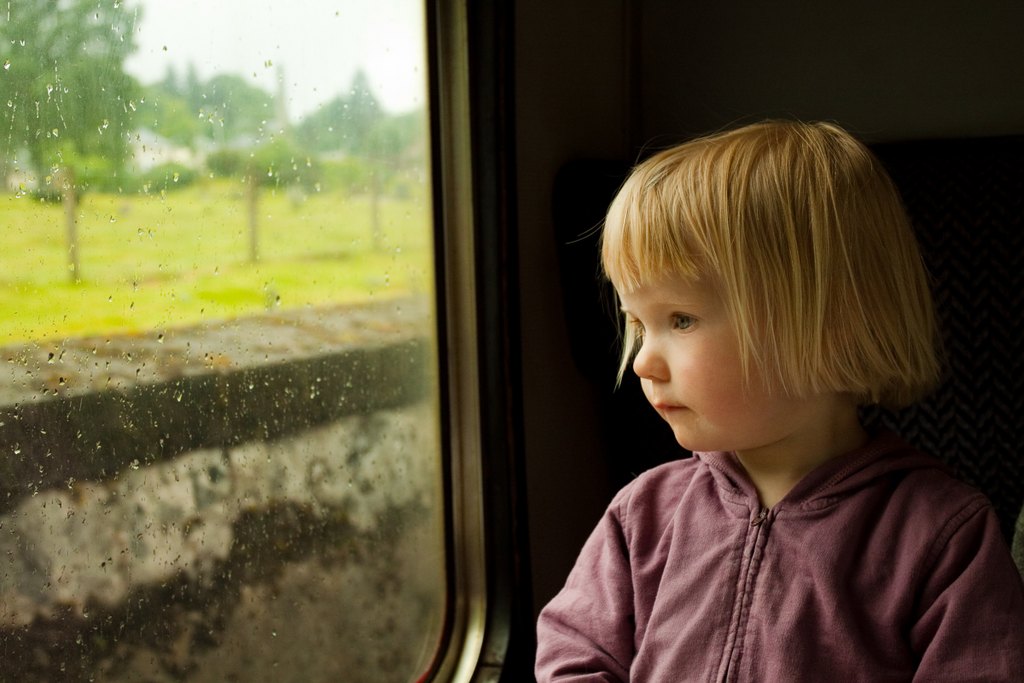 Sorry, I just discovered another boosted thread with the same pictures... feel free to edit, Asher.

Please don't Asher !
It is a very beautiful image ! So sweet !

Beyond precious to the nth!