Challenge for Pictures in a Series: Motif or Concept Call for Trains, Stations and Railway Gear!

This is a shot of the heads of a bidirectional train order semaphore signal outside the former railroad station in Columbus, N. M., a charming little town just three miles from the US-Mexico border. 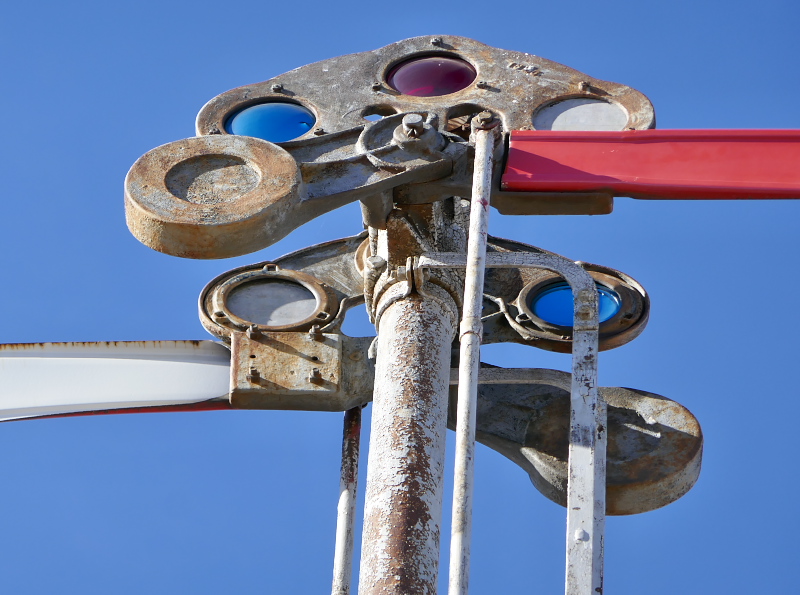 Douglas A. Kerr: Train order semaphore signal, Columbus, N.M.​
The railroad itself is long gone, its right of way in those parts having been repurposed into U.S. Route 9. The former station is now the headquarters and museum of the local historical society.

The train order system was once an important form of train control. In it, the movement of trains was governed by detailed written orders given to the train crew at stations or intermediate signal "huts". There were two kinds of orders. One had to have a copy signed by the train engineer and conductor for proof that it had in fact been delivered. The was not required for the other kind, which could just be "handed to" the engineer.

It was soon realized that time could be saved if, for the latter kind of order, the train didn't have to stop for the engineer to receive it, but rather the order could be given to the engineer "on the fly". This was done by tying the rolled-up order to a bamboo hoop, which was held up in a wood fork (later, a permanent metal frame) where the engineer could put his arm through the hoop to "snag" it.

So the state of the signal could be seen after dark, an oil lamp would shine through one of three colored lenses (formally called "roundels", pronounced "ron-DELS"). Although a different scheme was used at first, before long the convention became, for the arm down ("Proceed"), green; for the arm horizontal ("Stop"), red; and for the arm up ("Train Order"), yellow.

But, after train order operation became obsolete, the signal we see was repurposed for direct signaling, and the upward position became obsolete. And so the yellow roundels were replaced with metal plates (the ones we see look white).

(The green roundels look blue in this picture, in part owing to the high color temperature of the background sky - I did no color balance here.)

Each of the two signals (one facing in each direction, for trains traveling in both directions) was moved into one of its (original) three positions by a vertical pipe, which connected via a bell crank at the base of the signal mast to a horizontal pipe leading into the station, where it was moved by a lever operating in a quadrant which allowed it to be retained in one of the three positions. (One of those original positions of the control lever - "Train Order" - is now blocked off by a metal plate.)

An ingenious mechanism assured "fail-safe" operation in the case of the breakage or disconnection of this linkage. If the semaphore arm was originally down ("Proceed"), the counterweight we see fell, raising raised the semaphore arm). When the arm reached horizontal ("Stop") the counterweight hit a stop so it would not raise the arm above horizontal.

But if the arm were in the upward posiition when the operating linkage broke or became disconnected, the weight of the arm itself would drive it down. But when it reached horizontal ("Stop"), the lugs between the semaphore arm and the counterweight arm contacted and the weight of the counterweight prevented the semaphore arm from continuing its travel. Thus it ended up in the safe "Stop" position.

Yes, my research into this type of signal gave incomplete information, and I had to finish the job by "reading between the lines" and "reverse engineering", in part from the above photo.

Thank you! What I meant was the same picture popped up in another locomotive-themed thread. I guess it doesnt matter. Heres a fun fact: she was 3 years old when that picture was taken aboard the Jacobite Steam Train in Fort William, Scotland. Today, at the age of 11, she is a huge Harry Potter fan. Imagine the look on her face when she found out the exact same rolling stock and logos where used when filming the HP films!

Indeed, as Asher had said in his earlier piece, that locomotive is a "Consolidation" type, not "Pacifc".

A Pacific type locomotive has a 4-6-2 wheel arrangement. Not sure where I went so far wrong. 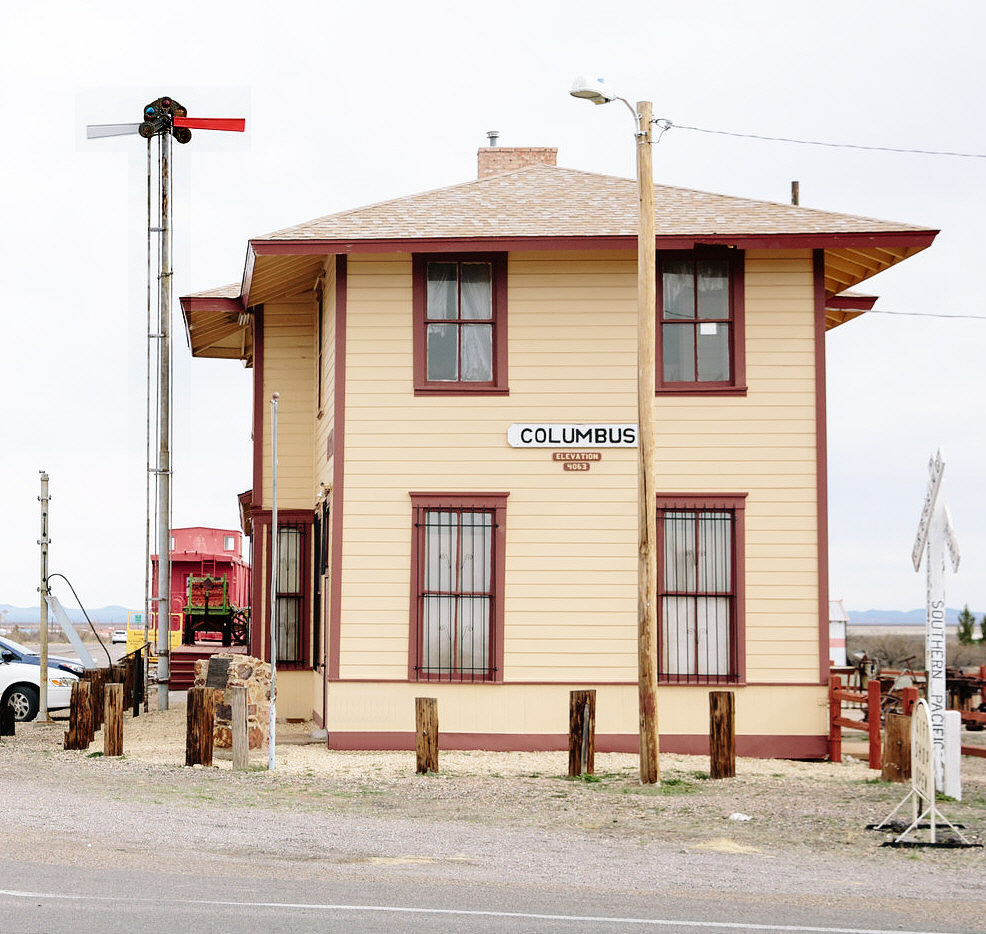 ​
we see the former Columbus, N.M. railroad station and, on the left, the train order semaphore signal I showed the details of earlier. The building as seen in the photo (and today) is the headquarters and museum of the local historical society.

On the far left we see a post used to hold train order hoops the train engineer could snag on the fly. However, historical photos suggest that this was likely originally located on a second track, farther from the station, for use by westbound trains (we look east in this photo). Perhaps train orders for eastbound trains were "served" in hand-held forks. And perhaps the post was moved here as part of the historical reconstruction. 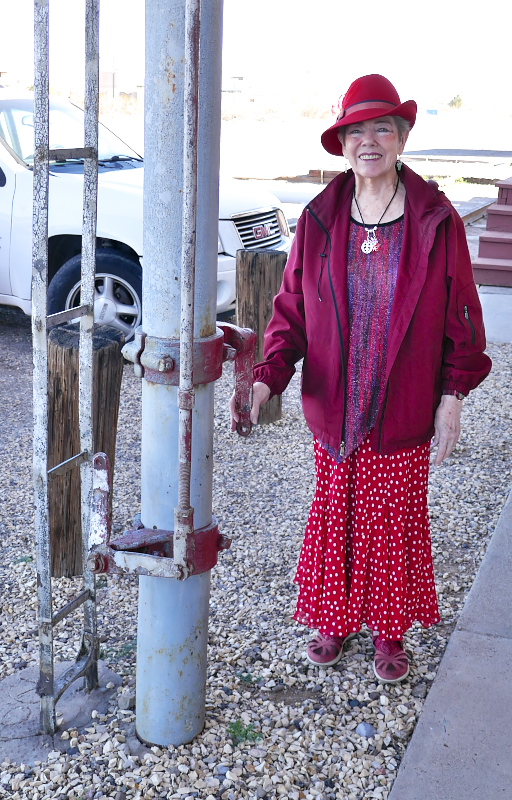 She has her hand on the bellcrank by which, originally, a horizontal pipe from a lever inside the station operated the vertical signal operating pipe (there was of course one for each signal; we see the other bellcrank on the near side of the mast). These horizontal pipes have been removed so that visitors to the museum can negotiate the sidewalk we see to the right, leading to the museum entrance.

There is an exhibition of photographs of the steam-powered Norfolk and Western Railway line by O. Winston Link presently in Munich: https://www.versicherungskammer-kul...yer/exhibitions/o-winston-link-retrospective/
It is well worth a visit.

I took that picture near Munich train station last November. There was police everywhere with lights (which made the photograph possible). Apparently a train missed a switch and ran off the rails. I don't think anyone was injured, the speed is quite low at such small distance from the station and the train did not tumble. Next day the train was gone. 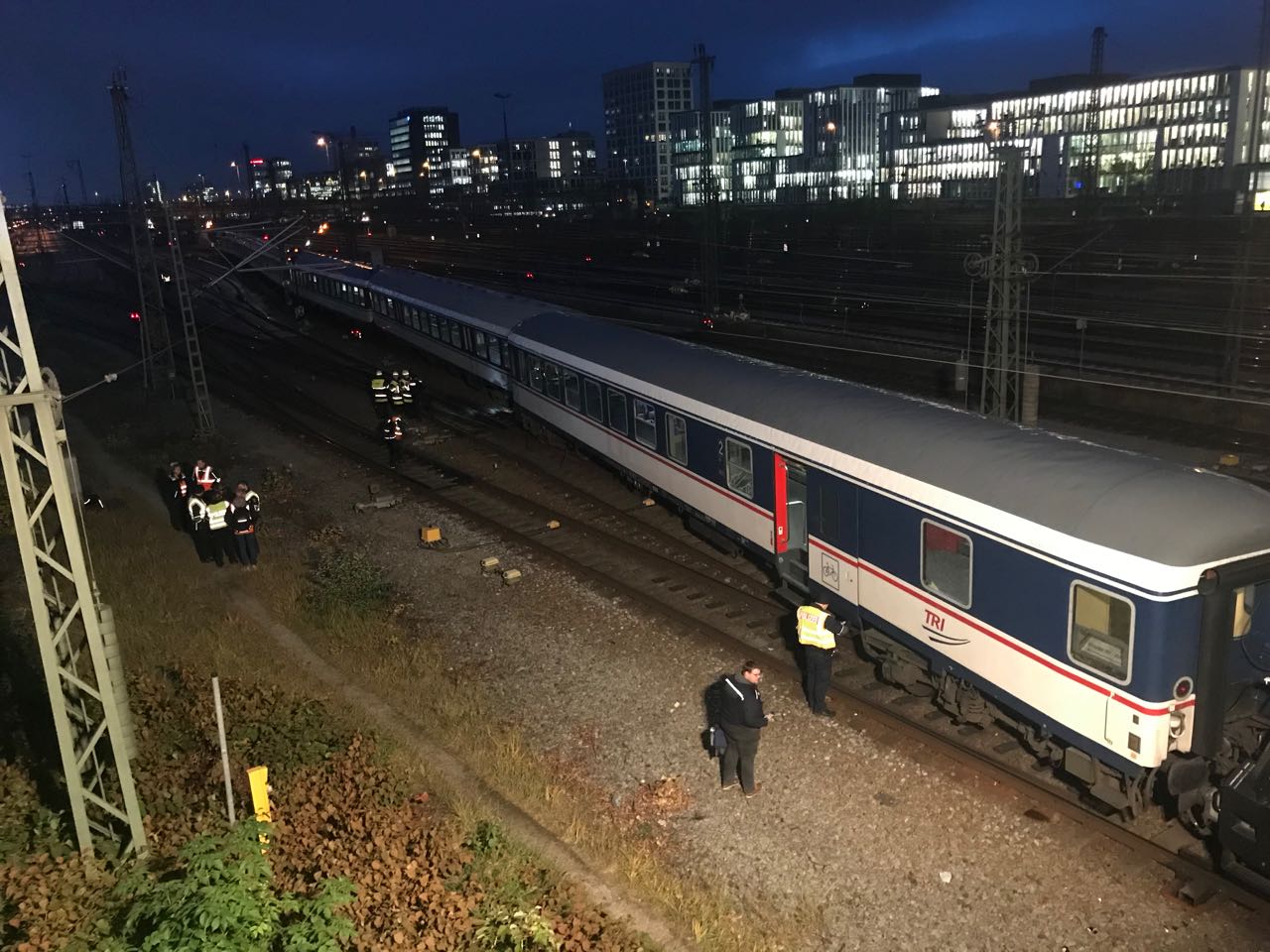 Jerome Marot said:
There is an exhibition of photographs of the steam-powered Norfolk and Western Railway line by O. Winston Link presently in Munich: https://www.versicherungskammer-kul...yer/exhibitions/o-winston-link-retrospective/
It is well worth a visit.
Click to expand...

Thanks for the introduction. I read up a little and what an interesting independant fellow he was!

Meticulous in his staging and organization for his night shots of an incoming train, with all the people waiting in their places until the multiple flashes were fired!

Jerome Marot said:
I took that picture near Munich train station last November. There was police everywhere with lights (which made the photograph possible). Apparently a train missed a switch and ran off the rails. I don't think anyone was injured, the speed is quite low at such small distance from the station and the train did not tumble. Next day the train was gone.

Great serendipity and that no one was injured!