Thousands of Haitians immagrants most without documents are passing through Colombia in an effort to reach the United States. Currently many are holed up at the Cali bus terminal unable to get transport northward to the border with Panamá. Officially they can't board interdepartmental without documentation but the city is trying to waive that requirement in order to move them on. Many are taking pirate transport. Their journey is stunningly arduous. I found one who spoke Spanish and asked him about it. He said they flew to Chile at a cost of three thousand dollars then bussed their way north through Peru then Ecuador and on into Colombia. This became especially difficult over the last few days when fifteen hundred of them were massed at the border with Ecuador unable to continue as bus services had collapsed under the load of migrants. Once they pass through Colombia and reach Necoclí on the Gulf of Urabá they must cross that body of water to reach Capurganá which is on the border with Panamá. According to the news there are 12,000 in Nacoclí at the moment. At Capurganá the real struggle begins. They must trek several days through the Darién jungle crossing rivers, and fending off poisonous snakes and attacks by robbers. A fair number don't make it. Those that do then must travel through Central America and Mexico before attempting to cross into the US. Though more than 90% are Haitian there are Brazillians, Africans and Cubans as well. There must have been three hundred or more at the terminal today. As can be seen in the photos many small children make this treacherous journey. 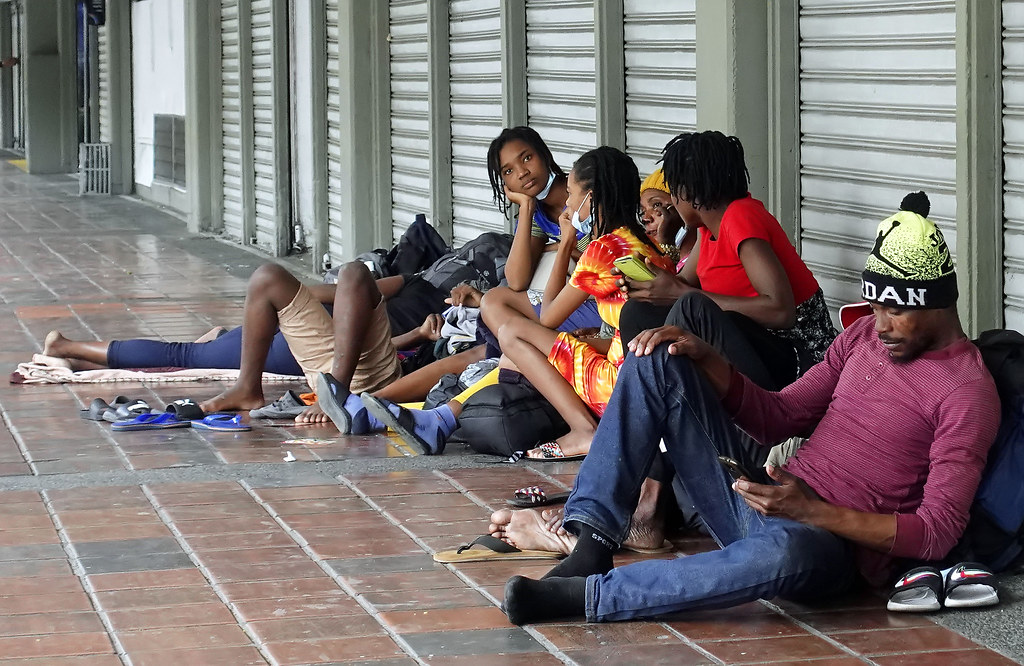 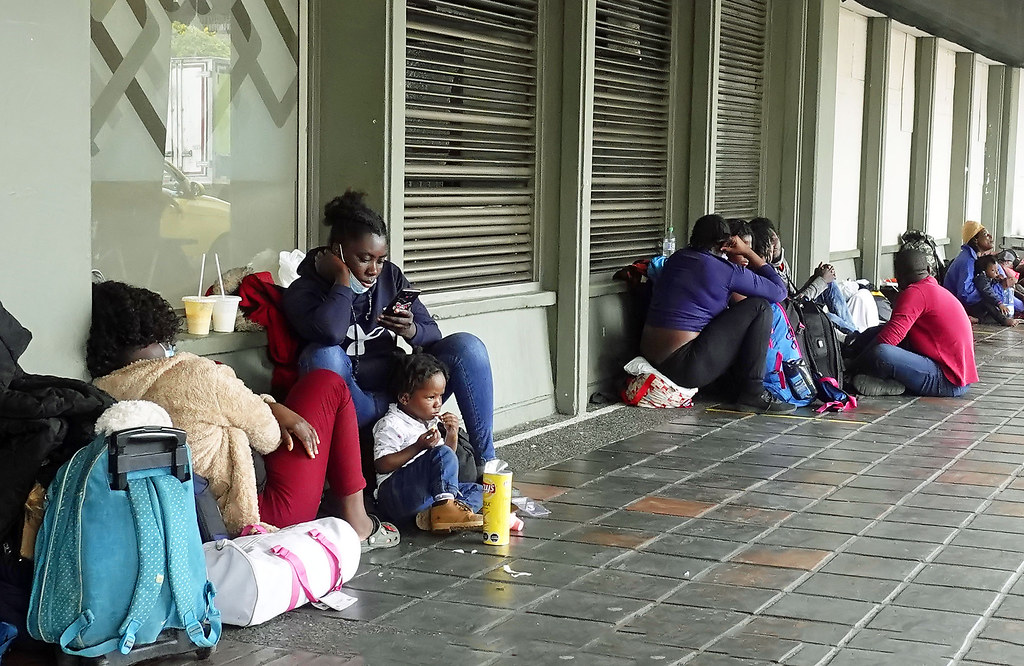 This is the result of our failure as advanced hominids to develop robust interdependent systems to protect each of us.

Distribution of resources and opportunity continues to cause massive turmoil and migration drives.

We do not as yet developed the necessary religions and mythology to change the awful so predictable suffering!

With the accepted transcultural concepts of “sin”, “destiny”, “fate”, Gods, evil and “foreigner”, we are locked into a chess board where all moves lead to panic and loss!

Why should folk with oil not have to work while other labour for a pittance a day! Why should some wonen go to a beauty spa and others imprisoned simply for crossing a border!

Part of the explanation is given by the following picture: 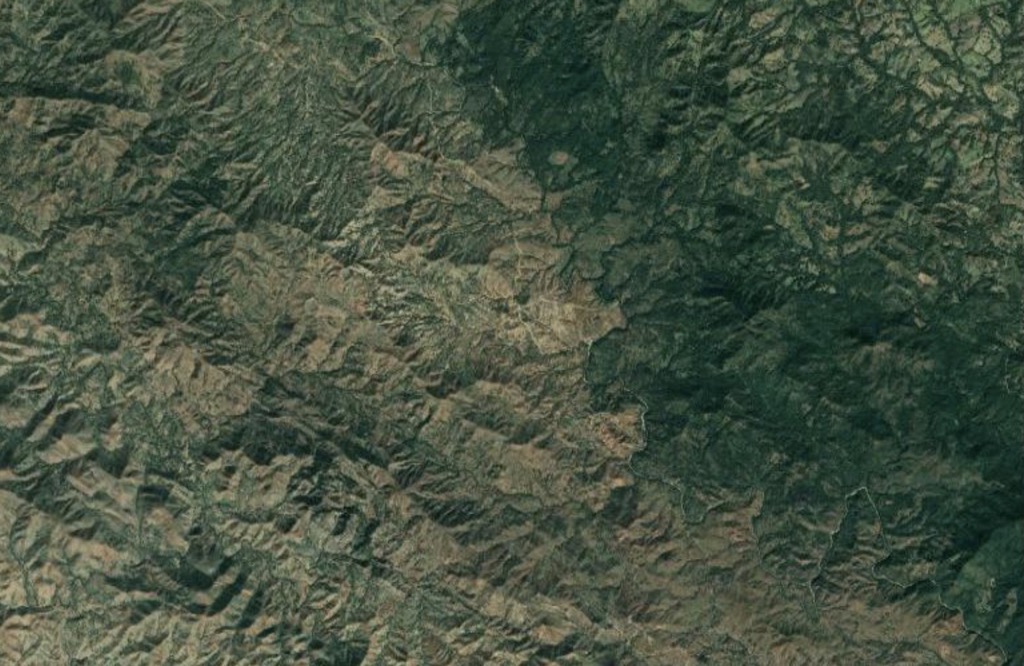 Jerome would that be a view of the Darién?

Nope. That is the border between Haiti and the Dominican Republic on the island of Hispaniola. As you undoubtedly know, the two countries share the same island. Therefore the two countries live in similar climate and environmental conditions. The fact that the border is clearly visible on this satellite image can therefore only due to human activity.

And indeed one country is much richer than the other, with about 3x more GDP per habitant. The population density goes the other way round: Haiti has about twice the population density of the Dominican Republic. What you are seeing here from space are the effect of poor planing and overpopulation: lack of forest cover. You do not see the consequence as to environment and erosion, but can imagine.

There are historical reasons for that, and I am ashamed to have to admit that my country of birth, France, bears quite some responsibility. Also, the Dominican Republic has a large gold mine, which Haiti lacks. But most of the difference is accountable to politics.

But, Jérôme, how did France contribute to the seemingly hereditary perpetual mess in Haiti?

So we ae are seeing deforestation on the left of the image and forested terrain on the right? I've been as far as Monte Cristi in the North West but never quite to the border.
Last edited: Aug 14, 2021

Is the deforestation simply cutting down the trees?

Asher Kelman said:
But, Jérôme, how did France contribute to the seemingly hereditary perpetual mess in Haiti?
Click to expand...

At independence, it was decided that Haiti should reimburse France for the losses. France let Haiti pay the debt till 1972. That, and involvement with the Duvalliers (the son emigrated to France in 1986), etc... It used to be a French possession and French is still spoken. Not all French colonies were treated badly, but the ones in the Caribbean were used to grow sugar cane, which is a very labour intensive crop which used slaves. That led to a less than ideal situation.

Of course, France is not the only country involved in the disaster that Haiti has become. As usual in the region, the big northern neighbor has some responsibility as well.

“It was decided”, Jérôme, but by whom?

Was this by the United Bations or An International Court or what?

Asher Kelman said:
“It was decided”, Jérôme, but by whom?
Click to expand...

Charles X, then king of France (I had to look it up).

Jerome Marot said:
Charles X, then king of France (I had to look it up).
Click to expand...

The massacre of the French settlers removed the very tools of a modern society and it never recovered!

Zimbabwe pretty well did the same when they took over productive farms and led the State to bankruptcy.

Revenge is an angry reaction, not a wise survival strategy in a revolution!

of course, by now, you've heard they just had another major earthquake, this one larger than the one in 2010. I've read reports 7.1 to 7.4. Seems there is also a major storm/hurricane headed their way. They just really cannot catch a break.
You must log in or register to reply here.
Share:
Facebook Twitter Reddit Pinterest Tumblr WhatsApp Email Share Link
Top